The History of Printmaking from Wood Blocks to the Digital Age

Artwork and words by Paul Twa

Printmaking has been a part of our visual culture for centuries, and the techniques under its umbrella have evolved over time to become increasingly sophisticated and precise.

In today’s world, we often take for granted the proliferation of images. Whether it be the sharing of artwork online or the mass-printing of books, we’re used to seeing identical images in different forms and on multiple surfaces. There was a time when seeing images that weren’t one-of-a-kind was a rare occurrence. Printmaking’s capacity to spread knowledge cheaply has made it a powerful communication tool and instrumental in the passing of knowledge beyond the upper class and to the general populace. While today it is often associated with a fine art practice, printmaking has always had ties tied to commercial intents. If it weren’t for innovations in printmaking, the textile, advertising, and publication industries wouldn’t look very different. Through the work of inventors, both from their intentional experimentation, but also accidental discoveries, printmaking has gone through many changes that have influenced how we see images and how we disseminate visual information. 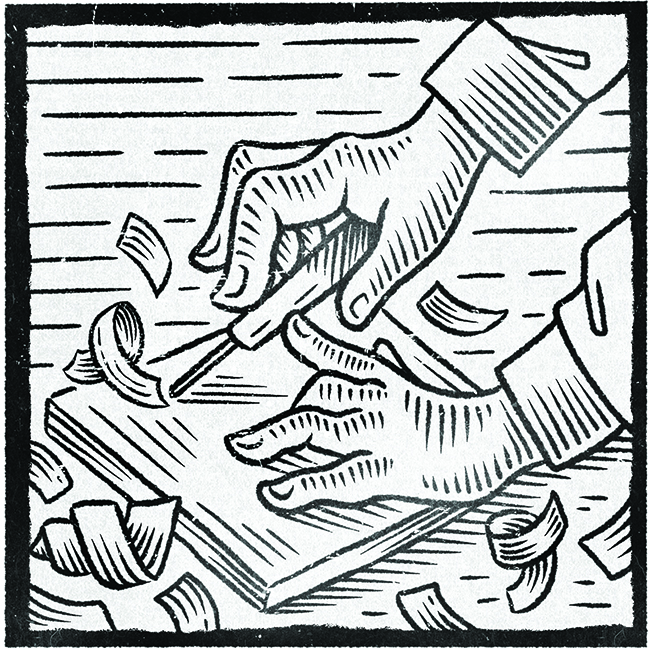 Following the Chinese invention of paper in 105 AD, relief print techniques using blocks of wood or stone began to be used. Carving into these surfaces allowed Chinese scholars to replicate Buddhist scriptures and other important texts. By marking directly on blocks of wood and then carving away the negative spaces, a printing matrix was created allowing for reproductions on different substrates. By the 9th century, books became more prevalent in China. 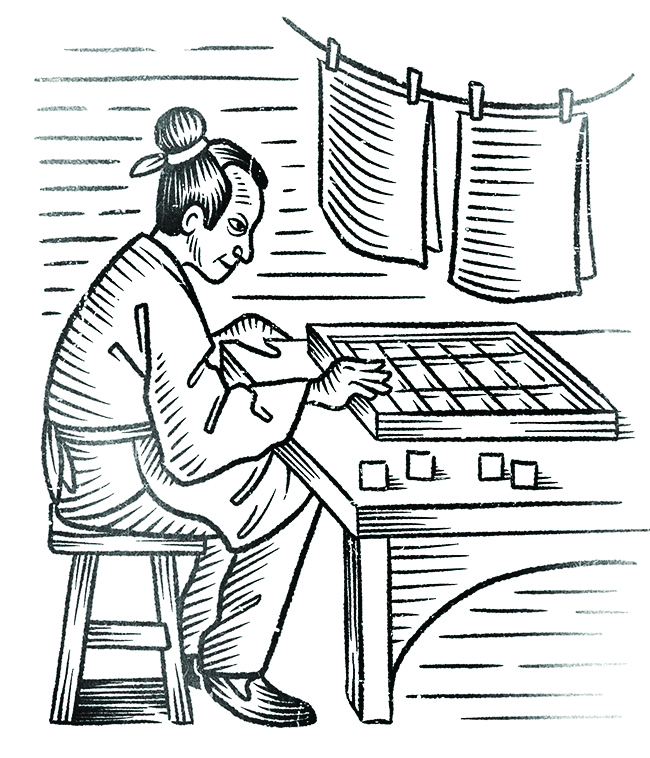 The use of moveable type in printmaking is noted as early as 1040 AD in China, 400 years prior to Johannes Gutenberg’s European invention. These systems allowed for individual text characters to be reassembled across pages rather than having to make unique woodblocks for each page. Woodcut printing spread to Europe through the Silk Road during the 1300s. Previously, block printing had been used to create impressions on textiles, but with the construction of paper mills in Europe during this era, woodcut prints on paper soared into production. 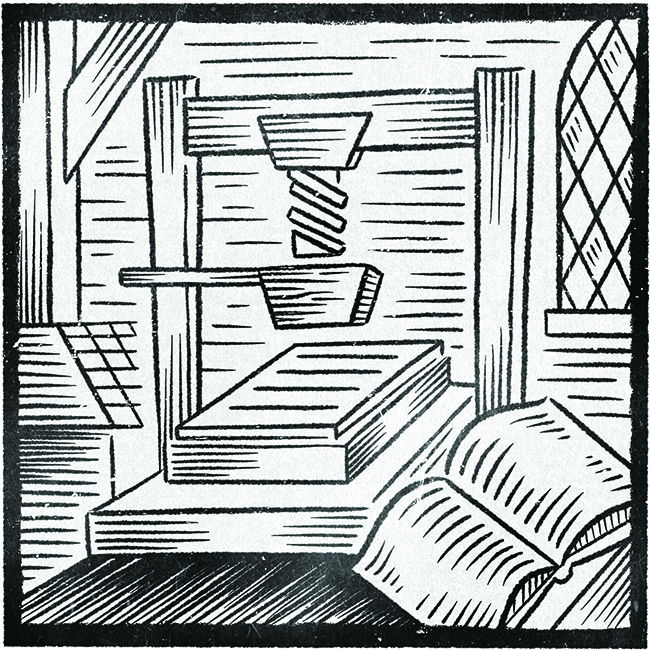 By 1450 Gutenberg introduced his printing press to Europe, allowing books to be reproduced more quickly and therefore the sharing of knowledge made easier than ever before. During the Renaissance, intaglio print processes were introduced. Artists used drypoint, etching, and engraving techniques to replicate existing paintings, helping to spread different artistic styles across the continent. Intaglio was a fast way to reproduce artistic works and became a more affordable way to own pieces of art. 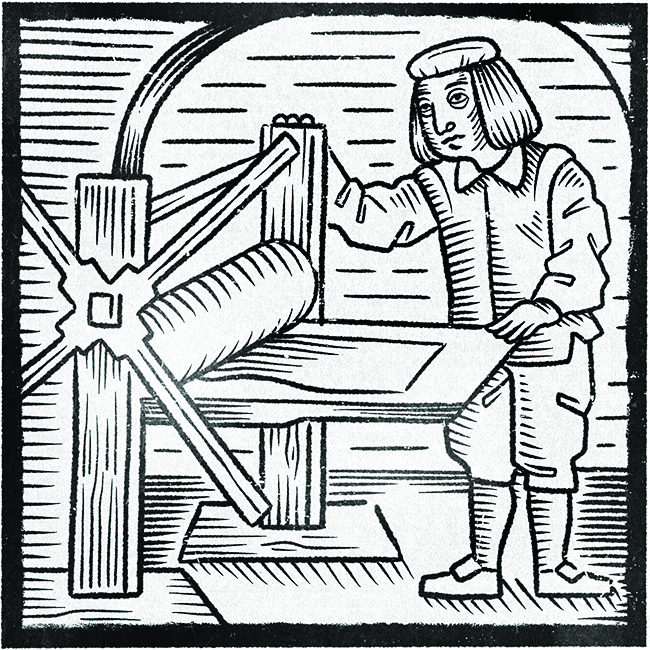 Originally in use as a way to decorate armour, engraving became a technique for book illustrations to provide visual knowledge to accompanying text. The printed image advanced the study of anatomy and architecture by allowing medical illustrations and engineering diagrams to be shared. Unlike woodcuts, engraving allowed for finer, more detailed marks, but also resulted in smaller print runs, making it the more expensive of the two techniques. 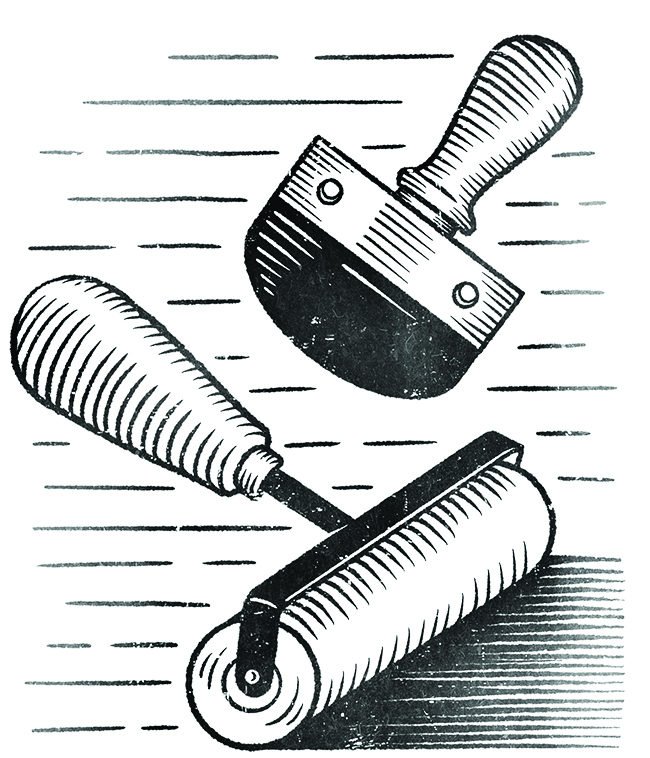 Mezzotint was born out of a desire to make prints that more resembled the shading techniques of drawing. Mezzotint, meaning “half-tone”, was a process invented by the German printmaker, Ludwig von Siegen in the mid-1600s. It involved burnishing a metal plate to create variation in smoothness that, when printed, would allow for a wide spectrum of tonal variation. This process catered to portraiture as the planes of the face could be described more subtly, and therefore, more realistically than with other printing techniques. 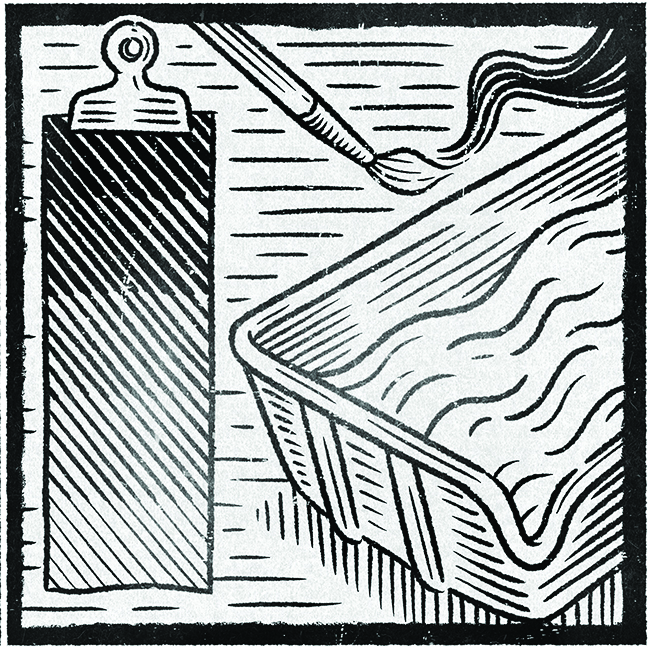 Aquatint was invented by Dutch printmaker, Jan van de Vele IV around the same period as Mezzotint, but unlike the latter, it would be a century until it was popularized by artists like Jean-Baptiste Le Prince and Francisco Goya. By exposing areas of a copper plate to acid, waterlike tones are created at varying shades depending on the concentration and exposure time of the acid. This allowed for more accurate replicas of painted works and further expanded commercial illustration techniques. 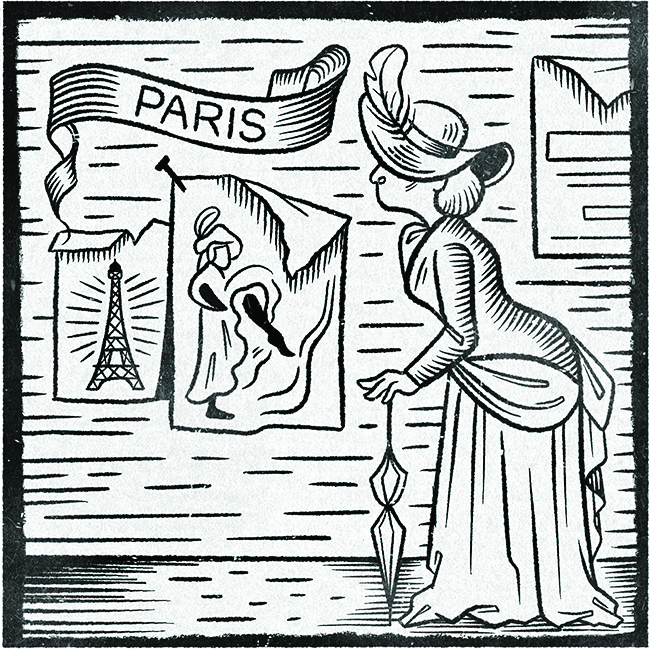 An accidental discovery by Alois Senefelder in the late 1700s. By using a greasy crayon on limestone he found that large runs of prints could be made with incredible precision. Lithography was particularly popular for commercial purposes in the 1800s. Colour Lithography quickly followed in the mid-1800s and it was used by advertisers to promote events and products. Notably, Henri de Toulouse-Lautrec’s cabaret posters, now seen as works of art, were the gig-posters of the Victorian Era. 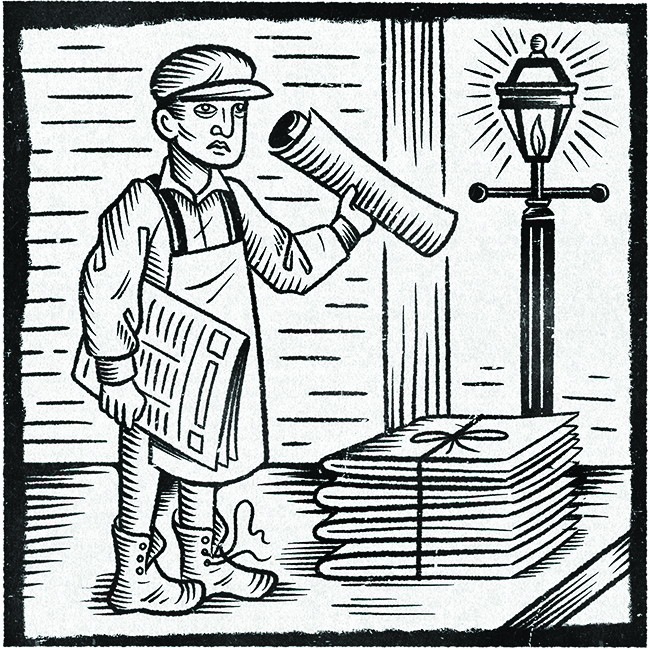 It is important to note in this history, the innovations in mass-printing processes during the turn of the century. American, Ira Washington Rubel, forgetting to load paper into a rotary printing press, printed directly on the rubber roller instead. This offset image, when printed from the roller onto a sheet of paper, created a sharper image and commercial plants began using his offset press by 1907 for high-volume projects. 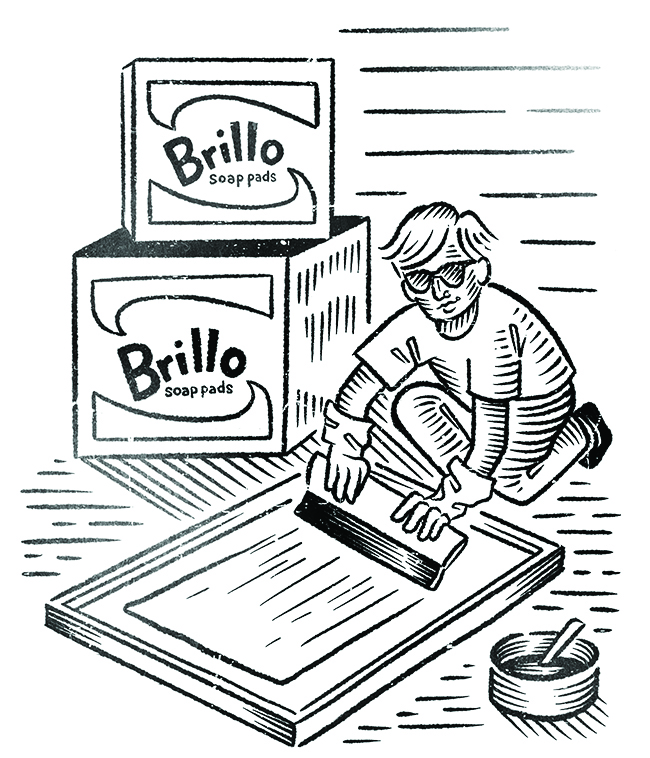 While the use of stencils to push ink through silk and other mesh materials has its origins in Asia around 900 AD, screen printing as we know it today didn’t get introduced to the West until the early 20th century. In 1910 photo-reactive stenciling was introduced. Pochoir was an alternative technique of the early 1900s where artwork was replicated by expert “colorists” in ateliers using stencils and hand-colouring to build up an image. Artists of the mid 20th century like Robert Rauschenberg and Andy Warhol brought the commercial innovations of screen printing into the art world. 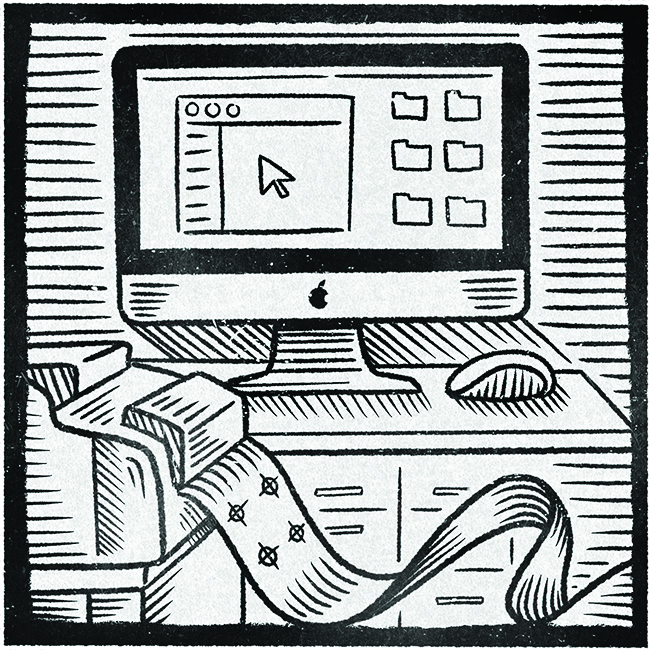 The inkjet printer has origins in Japan in the 1950s, by the 1970s they were more widely manufactured. Printing digital images allowed for affordable fine art reproductions. Giclee prints have become a broadly used term to define fine-art prints using archival inks and paper from an inkjet printer. Innovations continue to be seen in the digital sleeking process, where metallic foils, holographic effects, and other finishes can enhance the effect of digital prints created today.

Schwendener, Martha. 2011. “Goya’s Dark Etchings From A Past Full Of Horrors”. Nytimes. https://www.nytimes.com/2011/10/30/nyregion/goyas-etchings-of-a-dark-andcomplicated-past.html.

Thompson, Wendy. 2003. “The Printed Image In The West: History And Techniques”. Metmuseum. https://www.metmuseum.org/toah/hd/prnt/hd_prnt.htm.