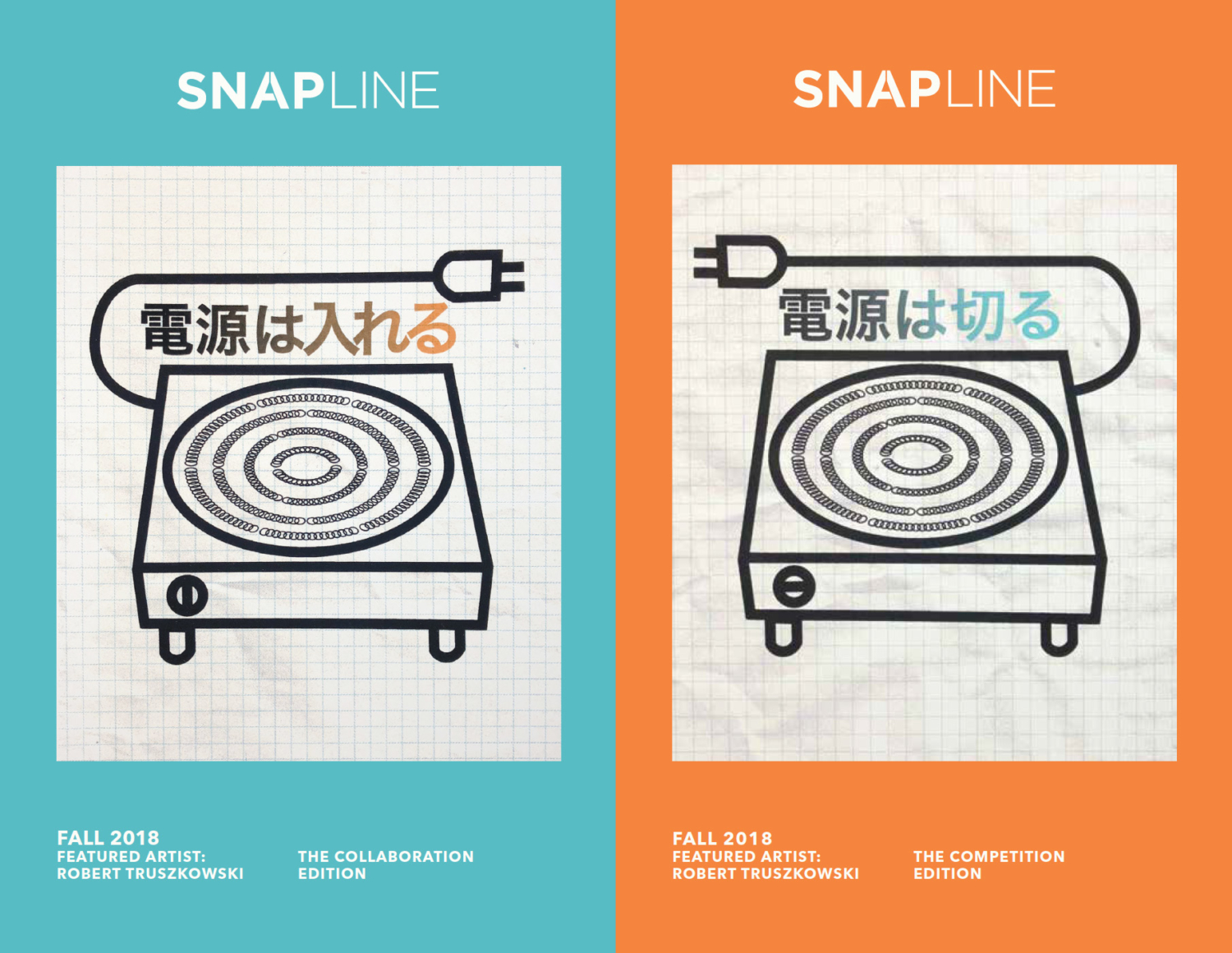 Robert Truszkowski received a BFA from Queen’s University, and an MFA from Concordia University. He is Associate Professor of Print Media and Head of the Department of Visual Arts at the University of Regina (Saskatchewan, Canada). From January to June 2018, he was Visiting Professor at the Kyoto School of Art & Design, and at Kyoto Seika University, in Kyoto, Japan. He has exhibited widely across Canada, the U.S., and internationally.

Statement about the prints for SNAPline

I don’t do well with themes. As an artist, I tend to steer clear of making work for something and trying to fit my art with an external condition. Now, don’t misunderstand me—my work is always about something. There are always conditions placed upon it: conceptually, intellectually, technically, socio-historically and politically. But I don’t love being told what to do. Or even asked. Not that SNAP is to blame for wanting me to make these prints with a theme. Maybe it’s me. Maybe I’m rigid and intractable. It’s hard to explain, but I think my resistance is more complex than that.

The new prints produced here for SNAPline’s theme are called On and Off, and they bear some relation to the idea of competition. The central image is a highly styled hotplate. I lifted the image from the Printmaking studio at the Kyoto University of Art and Design, where I was a Visiting Professor earlier this year. Anyone who knows me, knows my affinity for studio signage. When I saw this striking example imploring me to turn off the power (presumably, when I finished using the hotplate), I knew I had to engage with it. I reworked two versions of the image, placed them on trompe l’oeil sheets of graph paper, and produced text for a competing sign directing users to, oddly enough, turn the hotplate on. 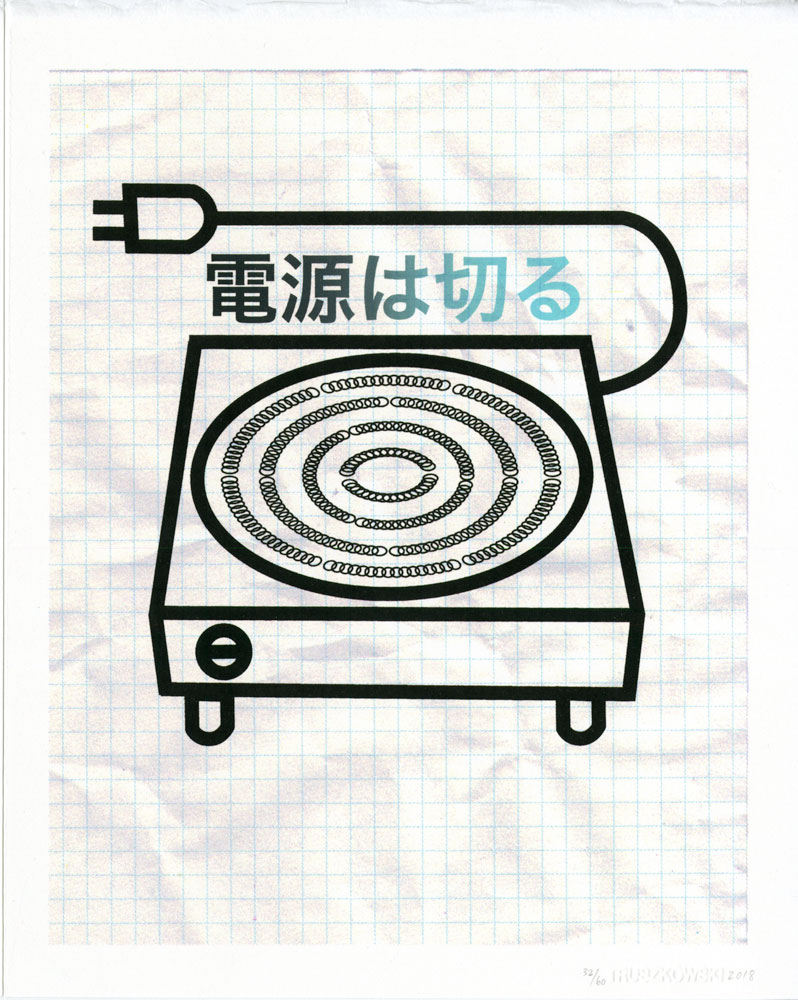 The elementary on/off binary created by these prints might suggest some sort of competition, but that’s not exactly my aim. Rather, these pieces compete for your attention. The questions I ask myself are manifold: As they compete for your attention, are they ‘signs’ or weird pieces of art about signs? Are you drawn to the blue-black sucker blend, or the orange-black version? Do you like the power cord on the left, or the right? Do you prefer the Japanese text for 電源は切る (turn power off) or 電源は入る (turn power on)? 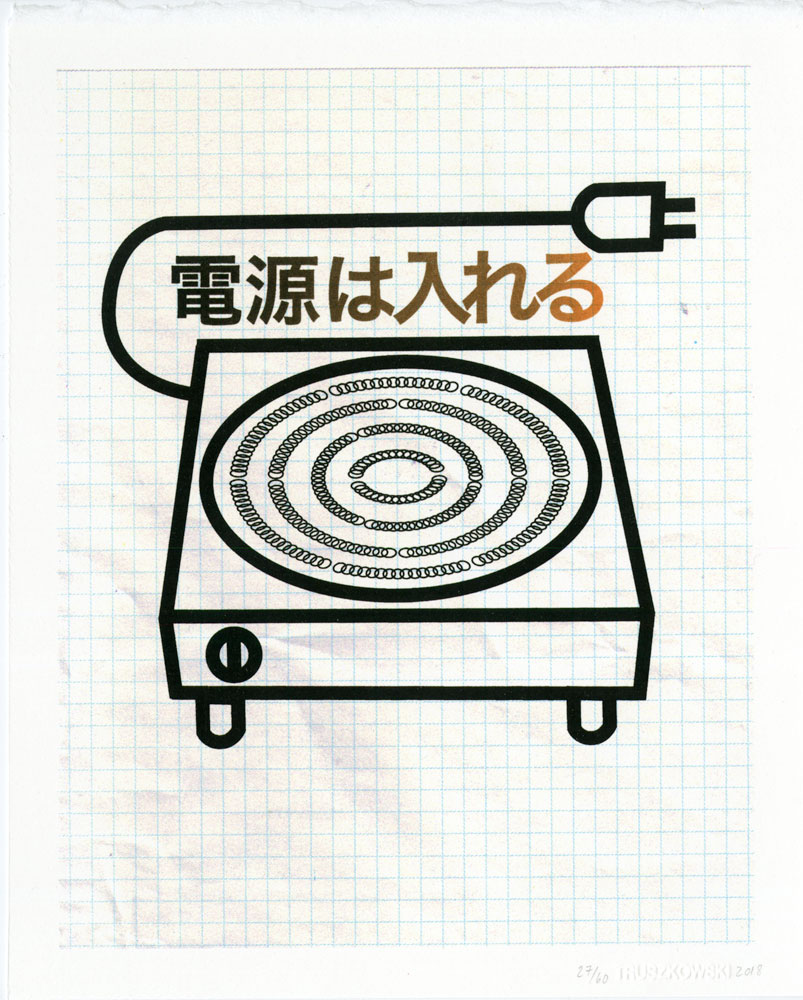 And what about the language – does it matter if you can read it? What circumstances led to a permanent sign being made in the first place? Why a sign with image and text? Why does a sign even work at all?

Gabriela Jolowicz
A Shot in the Back: Graeme Patterson’s Competitive Edge