A Shot in the Back: Graeme Patterson’s Competitive Edge 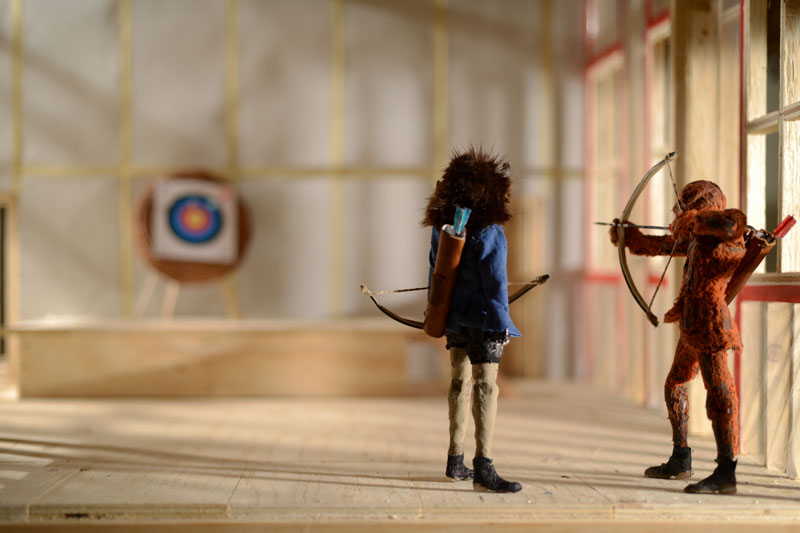 The most disturbing scene in Graeme Patterson’s large sculptural installation Secret Citadel happens in the video incorporated into the sculpture Camp Wakonda. The two main protagonists are engaged in what seems to be a friendly archery competition, familiar to anyone who spent time as a child at summer camp. The figures are Patterson’s familiars – a mountain lion and a bison – who play out the entire narrative of Secret Citadel across the four sculptures that make up this remarkable work of art. In part of Camp Wakonda we see the characters battling with their animal counterparts – the bison figure playing matador with a non-anthropomorphised animal, the cougar avatar, spear at the ready, stalking a mountain lion. Both contests end poorly for Patterson’s alter-egos. The truly alarming part comes in the archery scene where, as the cougar leans down to pull an arrow out of the camp wall next to the target, the bison calmly shoots him in the back with an arrow. The video switches to another scene as the cougar slumps to the floor. 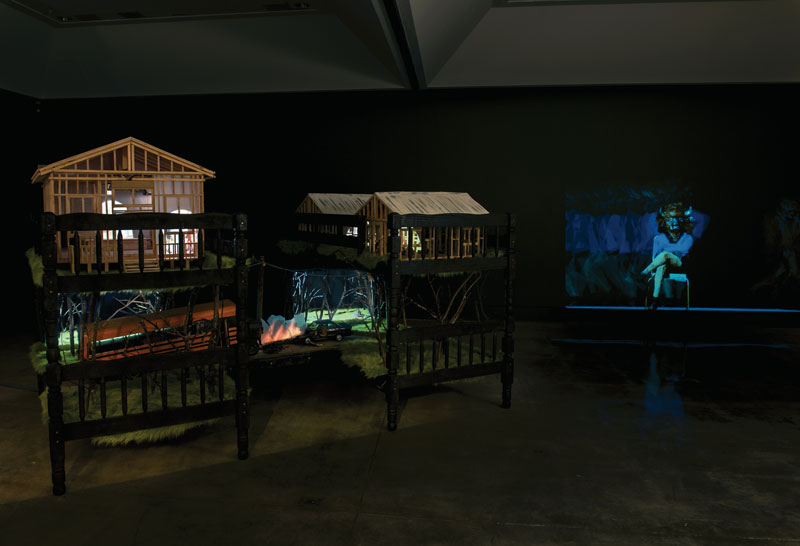 Through the complex narrative of Patterson’s Secret Citadel these two figures – bison and cougar – play out the dynamics of male friendship from childhood through adolescence and into adulthood. Equal parts friend and foe, ego and id, the avatars cooperate, compete and eventually are estranged, living parallel lives that just stop short of intersecting. As children they cooperate to construct their secret citadel, a fort buried under a mountain where they work together on mysterious projects. As adolescents and young adults, they compete – in the wrestling ring and at camp – and end up betraying each other. In adulthood they live out lonely lives in a rooming house, missing each other in the bar, on the elevator, each seemingly unaware that the other is inhabiting the same space.

There is a constant push and pull between the two protagonists of Secret Citadel, who are present in videos as both animated figures and costumed performers (Patterson himself in each instance). We all want the same things, they imply, but we can’t quite agree how to achieve them. Cooperation gives way to competition, over and over again, playing out in each sculpture and in the fifth element of the project, a long form video, also entitled Secret Citadel, that is projected on one of the walls of the exhibition space, or in an adjacent room. Even the costumes are included, hanging in the installation like trophies.

Competition and cooperation may seem notions at odds with each other, but that impression can be faulty like much that we discern at first glance. Team sports are certainly familiar examples, with their ethos of working together for the common goal of beating the competition. But teams often hold internal rivalries as heated as any official matchup. In baseball, for instance, one only needs to watch two outfielders competing to catch a ball, narrowly avoiding a collision and then laughing afterwards to see the dynamic of competition and cooperation in play (especially if the ‘winner’ then turns around and fires the ball to second base to begin a rare outfield assisted double play).

While cooperation seems common in the visual arts, competition is not as overt or as cut-and-dried as it is in sports. There are definitely winners and losers in art, but how they are determined is far more arcane than someone running faster than a field of others. Artists compete for jobs at universities and cooperate (in theory) once they have won a position. They compete for grants and cooperate on the juries to determine the outcome. Some artists get regular exhibitions, most others don’t – but are they in competition with each other?

Graeme Patterson often returns to the theme of sports to work out his ideas. In his first large scale installation project, Woodrow, he depicted characters bowling in the basement of a church, playing war with potato cannons amidst a series of grain bins, and engaged in an endless hockey game in a ruined rink, all complemented by the central competition between another two avatars – a monkey and a deer – that concludes with a form of cooperation. In between his two major installation projects there were several works that built on the themes of sports and competition – two more hockey works and a series of staged wrestling and boxing matches with friends that were documented and eventually integrated into Secret Citadel.

Patterson himself most often plays golf, and the sport provides insight into this artist’s psychological take on competition. In golf, it is often said, you are competing with yourself. There are winners and losers each round, but there isn’t really any head-to-head competition. You shoot your best game, or you don’t. Golf is actually a good metaphor for art-making – a lot of seemingly puzzling activity that ultimately is a conversation with history in reading the course and with yourself in achieving a personal best. If your body cooperates, your mechanics are just right and you don’t get in your own way, you will vanquish the competitor who is that other, losing version of yourself. The rest of it – the green jackets, the television cameras, the crowds – are just a gloss. It’s not all that that different from an art fair, really. For the artist, the competition and the cooperation are internal before they ever manifest externally. It’s something we know standing immersed in Patterson’s installations, something that feels true. After all, on the mental and emotional planes, who among us hasn’t shot ourselves in the back?

Robert Truszkowski
The Value of Competition