Wichuk was toiling away at a job he hated, when a web search led him to a press for sale in Nokomis, Saskatchewan. The town newspaper had rescued it from a shop that had been demolished, intending to put it to use. But the paper never pressed it into service and it languished for years in a basement storage space. There had been previous interest shown in the press for parts but, luckily for Wichuk, the newspaper chose to keep it intact. Trailer in tow, he and his uncle made a trek to Nokomis and transported the press back to Edmonton where it took centre stage in Mike’s garage/ studio. “I don’t know what would have happened if I hadn’t called. I would’ve still been at that job.” Two years later, Wichuk located a Challenge cutter. He didn’t travel as far for this piece of equipment but, the cutter was well-travelled. Like the Heidelberg, it had an interesting history. Purchased from an Airdrie-area farmer, it had belonged to his mother who’d owned a small print and copy shop in Wyoming years earlier. Wichuk recalls the farmer saying the cutter travelled with the family when they moved to Alberta. Closer to home, Wichuk sourced a large cabinet of type. He purchased the font families from a local bindery going out of business, using a catalogue to identify the type and organize it to the letter. 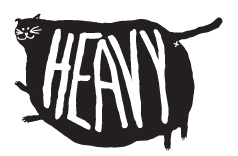 The garage studio was not without its challenges. Wichuk boarded up the garage windows to keep heat inside and found the resulting lack of natural light taxing. “I’d come out in the morning and work all day and wouldn’t come out until dark. It was pretty awful.” But he made it work because of the difficulty finding suitable studio space in Edmonton because of concerns around noise and chemicals associated with the press. The garage location continued to serve him well for some six years. By that time, Wichuk had a weightier challenge: keeping Fort Heavy profitable.

He cites Edmonton’s northern location, having to source paper internationally, shipping costs, brokerage fees, and the 2015 downturn in the Canadian dollar as factors that drove up the cost of doing business. In 2017 he made another fateful decision, to work full-time at a design firm and devote his free time to personal creative projects. He took on no additional “for hire” printing projects in 2018. He has no intention, however, of letting the Heidelberg sit idle and is getting great enjoyment focusing on his own work. His favourite part of the letterpress print process is seeing the first few prints come off the press. “I like the idea of putting ink on paper in a simple way, one colour at a time. The tactile feel is important too.” 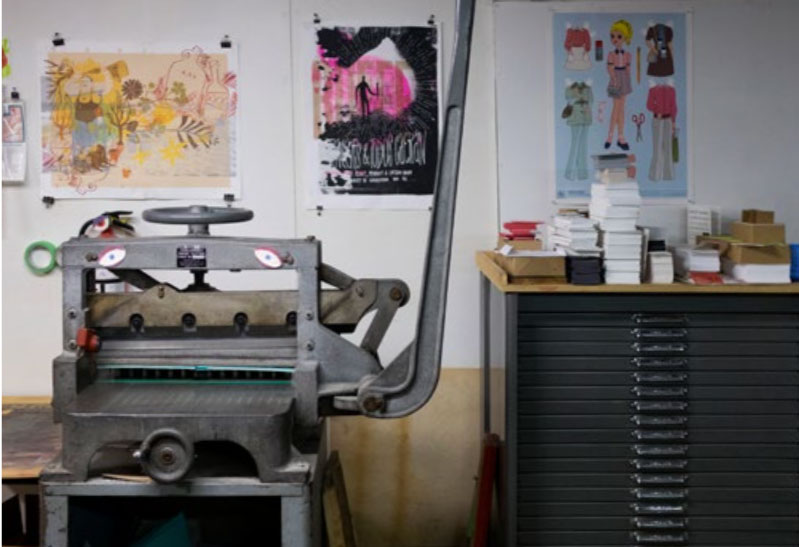 Though he says inexpensive, digital printing is hurting the print industry overall by making it quick and easy for clients to get jobs done, Wichuk says photopolymer printmaking has saved letterpress. “It saves the time of hand setting type.” He remains optimistic about the future of traditional letterpress. “I think there are still going to be people who appreciate the quality of the product that comes out of letterpress and that will never change. As long as the presses are still around and going, that will be the case.”

“I think there are still going to be people who appreciate the quality of the product that comes out of letterpress and that will never change. As long as the presses are still around and going, that will be the case.”

What/who do you consider to be the greatest influence on your work?
Hungry Workshop and Studio on Fire are two letterpress printers I’ve been following for years. The attention to detail and level of skill coming from both places is inspiring. I always try to bring my printing to that level.

When did you begin printmaking (and letterpress specifically) and what drew you to it?
I began screen printing in 2003 or 2004. My first experience with letterpress was a class in 2009-ish at SNAP. I bought my press in 2012 on a whim after a sudden decision to leave a very unfulfilling design job. I enjoy things that are technical and involve problem- solving. I like being able to do something from conception to completion without the help of others.

The logo for your company, Fort Heavy, is a chubby cat. Is there a significant cat in your life?
The logo is inspired by a drawing my wife did of our very fat cat named “Cat.” He is an asshole.

How does your workspace affect your art?
Despite being pretty small and cramped, which can be frustrating at times, I like to think that doesn’t affect my work. I feel that I can produce the same quality of work here that I’d be able to in a nicer, better outfitted studio.

How does letterpress inspire you and your work?
I am a perfectionist. Letterpress is an imperfect medium. I enjoy pushing the limits of what letterpress can do, trying to achieve as close to perfect results as possible. 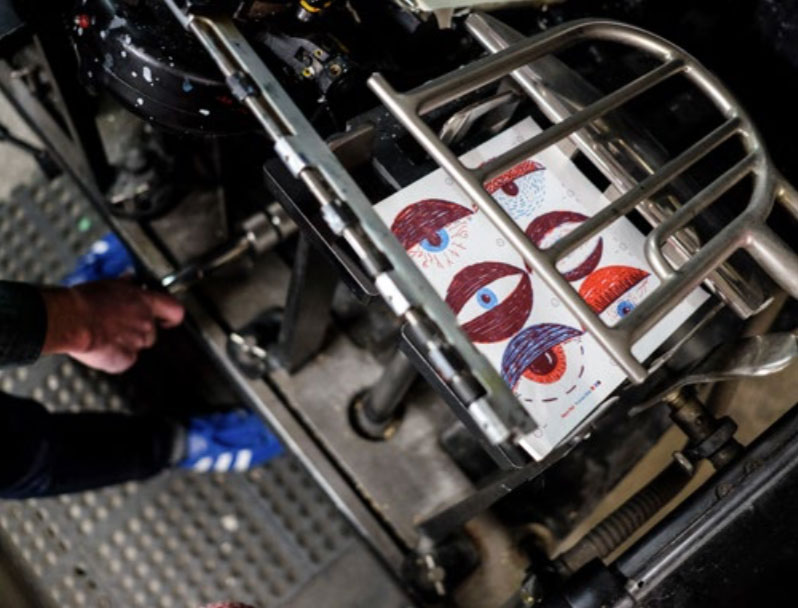 Do you follow a daily work routine?
Currently I’m working full-time as a designer at an agency downtown so I stick to a loose 9-to-5 schedule. When I was printing full-time my daily routine was more along the lines of: wake up, drink coffee, answer emails, do estimates, look at the internet
for way too long, get frustrated about UPS not delivering paper on time, start cutting paper, eat something, start printing at 6 pm. If I’m lucky, finish around 3 am.

How important is the incorporation of text and image in your work?
I think it all depends what I’m doing. Being a printer that mainly uses photopolymer plates, I’m definitely not a traditionalist and don’t believe that true letterpress printing has to involve wood or metal type. 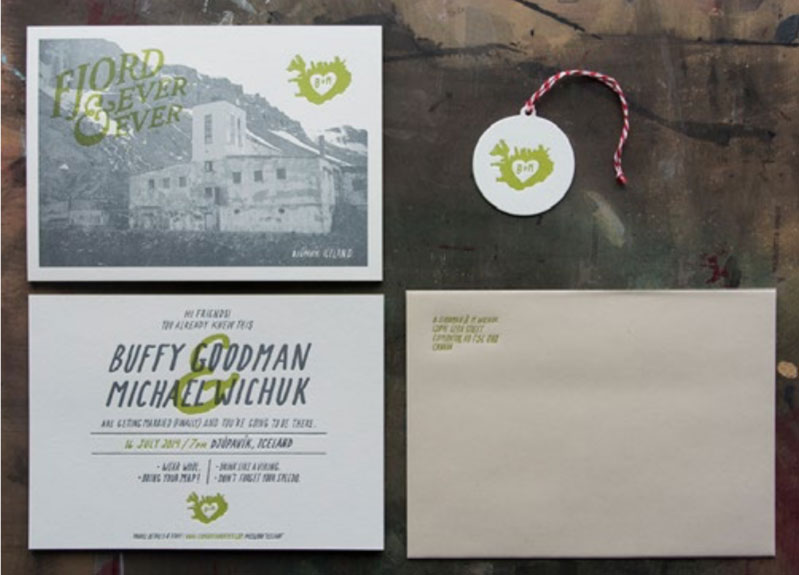 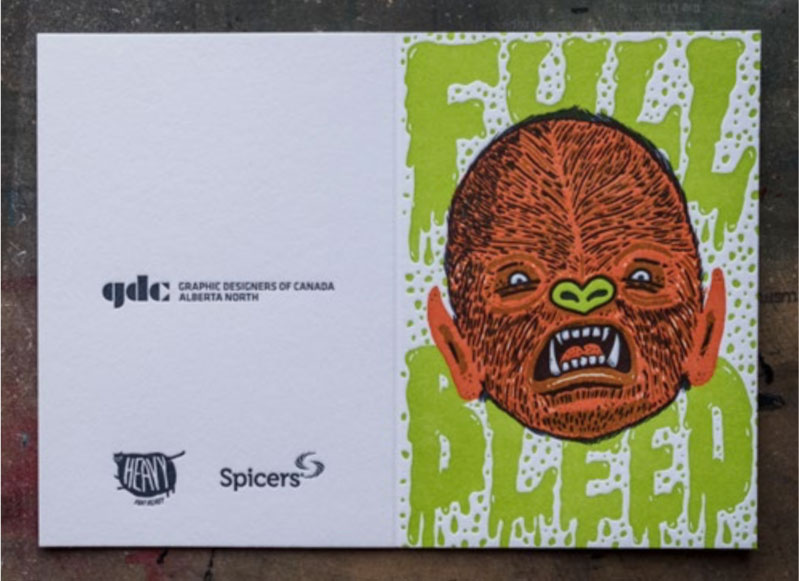 All photos by Buffy Goodman.