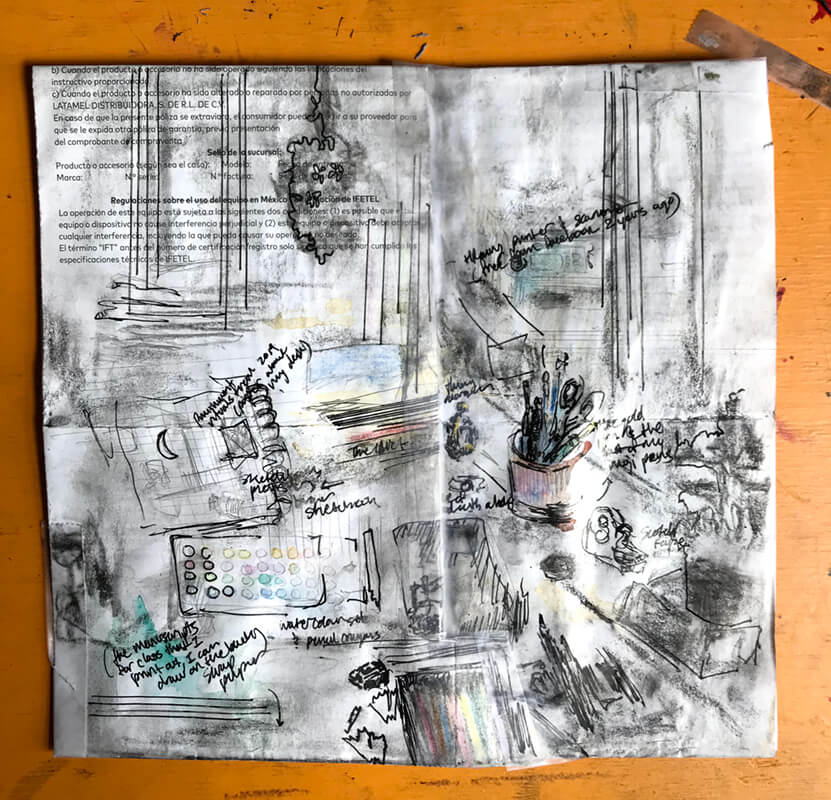 Early this spring, when the closure of the border between the United States and Canada had just been announced, a friend video-called from Oregon. I threw out a pile of paper (notes, receipts, half-finished grocery lists) that was taking up space on my desk, and answered. The signal fluttered in and out, a side effect of the University of Oregon’s free wifi network; as the video lurched frame to frame, Dana Buzzee and I abandoned our summer plans.

Since meeting in Calgary in 2016, Dana and I have written collaboratively, curated each other’s work, and provided critique from afar, maintaining the sense of long term, creative vulnerability that characterizes friendship between artists. We visit in person once a year during my annual return trip to Edmonton, and invariably our conversation follows the same, undiscussed route: we catch up–”what are you working on” becomes “remember when…” – and the track ends where it always does: on collaboration. For all the poetic potential within notions of collective effort and a loss of ego, creating beyond the scope of what one could do alone, there is a specific intimacy to the work of collaboration: the physicality of sharing tools, space, and intention side-by-side in the process of making together. In the spring, when Dana called, we spoke about collaboration and landed on a challenge: how to reproduce the physicality of working together, that side-by-side feeling, across nearly 5000 km of insurmountable distance.

Vice Versa is an ongoing project designed in response; it is one attempt to translate the specificity of place, time, and effort that printing together in person encapsulates without denying the implications of space between us. Collaboration over long distance is only possible through multilinked pathways of technology and labour. The physical web of cable that allows us to coordinate through the internet is echoed in an interconnected network of workers whose work in fabrication, transport, and sanitation enable our collaborations to continue. We have a responsibility to the network, and Vice Versa is an endeavor to meet it. I was already working from home when isolating became a public health necessity. A week later, Dana was teaching their undergraduate students through Zoom and grading at a folding t.v. tray table. In discussing our ad-hoc apartment studios, we looped back
over the logistics of printed work and long distance collaboration. Without the anonymity of a collective garbage bin in the corner of a shared studio, the potential volume of each of our individual waste outputs during the course of the project grew threatening. Printmaking has byproducts; offcuts, misprints, and test proofs join paper towels, saturated rags, and hollowed out plastic tubs in the incidental waste of working. Working digitally would appear to address the issue of excess material waste, but even digital consumption has an environmental cost.

In New Dark Age: Technology and the End of the Future, James Bridle examines the impact of waste, heat, and carbon emissions from large-scale data storage sites. Physical infrastructure that upholds the cables, towers, and data centres which grant us access to high speed video and file sharing produce “about the same carbon footprint as the airline industry,” expanding the number of people affected by our project to include anyone who works on the upkeep and damage control that our internet reliance necessitates.1 It was with this sense of gravity that we determined the “rules” for our collaboration: nothing bought, nothing wasted, and nothing sourced from the infinite, digital database that forms our immediate environment when sharing space is not possible.

These three rules of Vice Versa stem from our understanding of collaboration as a relationship of ownership and responsibility. Collaborators, as equal players in the work of art making, gain a sense of ownership over the work that’s produced; in doing so, we also gain a sense of responsibility to each other, committing to uphold each person’s contribution as integral to the whole of the project. In part, limiting the concomitant factors of consumption and waste through these rules is a means of controlling the collaborative network. In 1967, Charlotte Posenenske posited that artistic collaboration is not limited to artists with her work, Square Tube Series. “Collectors, promotors, steel workers, transporters, installers, and ‘spiritual and financial supporters’” were credited as “co-authors” in her steel and corrugated pasteboard sculptures, expanding the scope of who had ownership over the final pieces to anyone whose labour, in part, contributed to its exhibition.2

To extend Posenenske’s logic of co-authorship to contemporary printmaking, the list of unnamed collaborators must include not only paper makers, ink producers, and creators of digital image sources, but also sanitation workers, whose work is integral in actualizing the object of a print, and who, therefore, have ownership over it. In every purchase of paper and partnership with printers, waste is produced. Even an effort to “shop local” can’t account for the fact that the more we buy, the more labour is required of essential workers in fabrication and sanitation. Supply-chain economics and outsourced fabrication confuses the effort to consider every worker whose labour contributed to the final piece as a collaborator, and the geographic scope of Canadian garbage is far reaching. When the network of collaborators extends all the way to people who may interact with our offcuts and printing rags in Philippines, Malaysia, Cambodia, and Indonesia, the project of listing co-authors becomes too expansive to fully realize. If we are not responsible to our collaborators, the project fails. The more waste we produce, both physical and digital, the harder it is to ethically consider our work a true collaboration.

With any set of rules comes the possibility of breakage. While I don’t delude myself in thinking that we will manage to produce zero waste and purchase-free prints, the context of our isolation reveals the stakes of attempting to meet our own expectations. Arundhati Roy has described the pandemic as a “portal, a gateway between one world and the next”3 in which the former world is the current one, where violent, racial capitalism has determined that the populations most often targeted by structural inequality would also be the those most likely to be affected by the virus.

The same systemic oppressions that determine the unequal spread of COVID-19 also impact who feels the weight of the waste we produce. By expanding ownership or authorship to anyone whose work plays a part in creating the materials, tools, and systems that enable long-distance collaboration, Dana and I become responsible for the division of work, complicit in a system that places the burden of waste on people for whom isolating from a viral pandemic was never an option.

The word “collaborator” carries a second meaning: politically, to be a collaborator is to occupy a role of complicity. Collaborators are aides to the enemy, double-crossing obligations of solidarity. The fiction is that in colluding with the powerful you, at least, will be let out alive. Within the reality of ongoing health, human rights, and environmental crises, to get out and leave anyone behind is not an option. Collaboration grants us a framework to reconsider our responsibilities, and to own that which we produce. If we are going to reduce our complicity with structures of injustice, where we draw the line on how much waste is acceptable has to shift closer and closer towards zero. For Dana and me, Vice Versa is a means of continuing to collaborate within this future.

The rules of Vice Versa are a refusal to settle for half measures like recycled paper, “green” inks, and local production. For now, it is a chain of emails and a drawing of my home studio, sketched on the back of a notice from the city about wearing masks. Once I mail the drawing to Dana, our network will expand to include letter carriers and drivers, and every move we make in collaboration will expand it further. We are aiming to consume nothing and waste nothing; in our imperfect execution is the beginning of a collaborative practice that radically limits our complicity within racial capitalism and environmental damage. The stakes are no less than working towards the second world that Roy interpellates, the one on the other side of the portal.