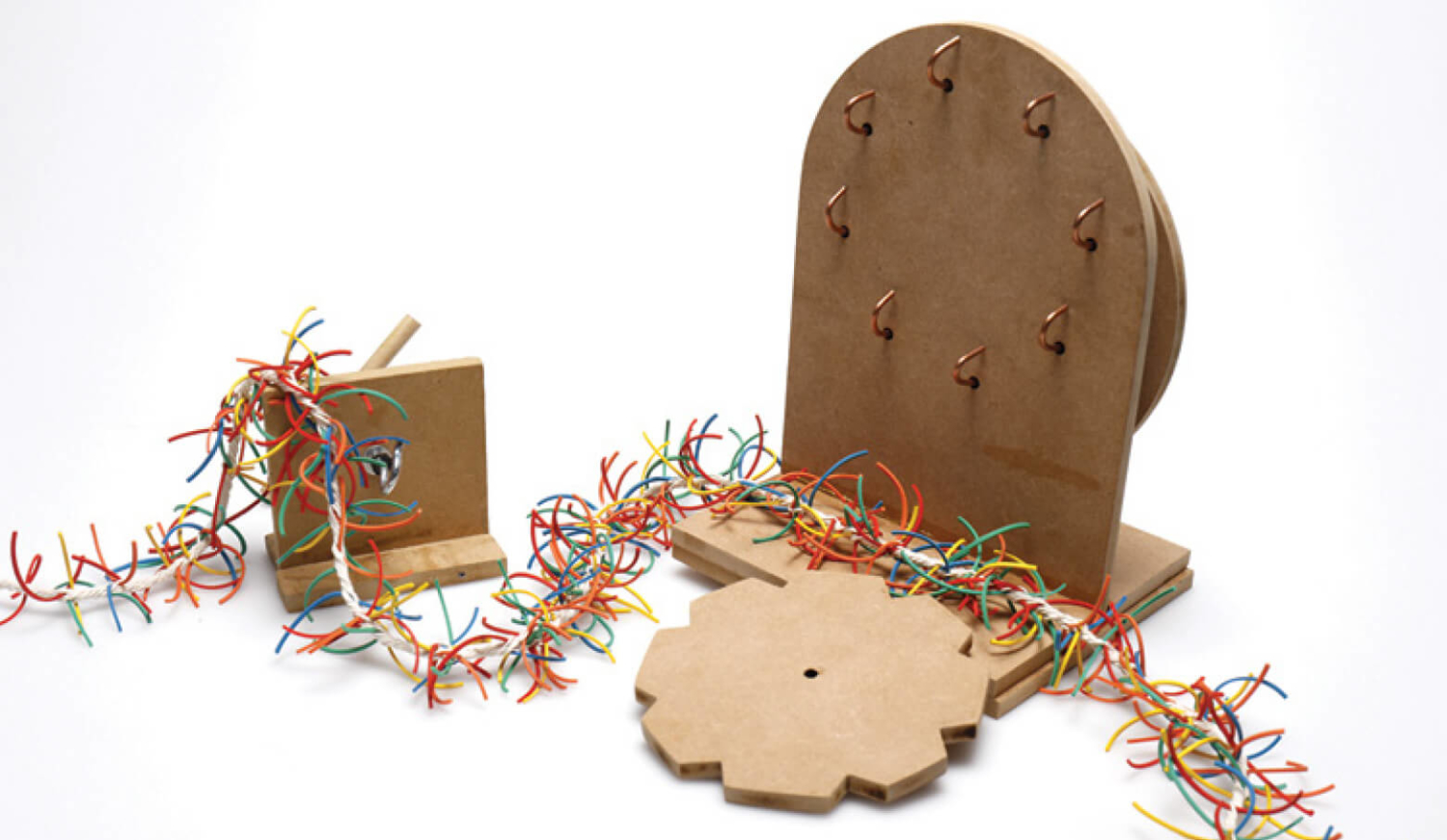 Let me begin by stating what will soon become evident: I am not a printmaker. I am, however, invested in understanding how artists work and how material circumstances inform what they make. My first foray into printmaking was through a Print Sampler course offered at SNAP in early 2017. As an undergraduate student of art history delving into the world of 20th-century graphic propaganda, I wanted to learn about printmaking techniques in order to better understand how these images were produced, what forms of labour were involved in their production, and how modes of production shaped their visual form and content.

After the four weeks of the course lapsed, I wanted to find ways to continue making modestly-sized prints in the comfort of my own home and within the constraints of my student budget. Enter, Print Gocco. Invented in 1977 by Noboru Hayama for the Riso Kagaku Corporation, Print Gocco (プリントゴッコ) is a self-contained compact colour printing system that combines elements of silkscreen printing and stamping to produce greeting-card sized images. The machine uses a flashbulb to burn a drawn or digitally printed image onto a plastic mesh, to which the user then applies ink. The inked mesh is then covered with a plastic sheet and stamped down on a substrate. The machine’s hinged top and adhesive gridded base enables accurate registration, which allows for multi-layered prints. In a testament to the product’s user-friendly design, it is estimated that nearly one third of Japanese households owned a Print Gocco in its heyday.1

As far as home alternatives to silkscreen printing go, Print Gocco sounded promising. I was fortunate enough to find a Print Gocco listed on Kijiji Edmonton for about 100 CAD by a kindly retiree who used to run a wedding card business. By the summer of 2017, Print Gocco had been out of market for 9 years, which meant that consumable parts such as the proprietary screens and flashbulbs, and materials such as ink were increasingly rare even on the secondhand market. In short, my Gocco printing days were numbered.

When the complexity of a tool that claims to make printmaking accessible renders repair, modification, or modular substitution unviable, then that tool effectively prioritizes dependency on the manufacturer above user empowerment. The Print Gocco system, like the Cricut plotter and many other making tools marketed under the guise of maker self-sufficiency, is designed to enable user creativity only within its own proprietary constraints and within the boundaries of consumer capitalism. These products channel consumer demand for creative tools into highly-designed all-in-one solutions that lack the modularity or repairability of truly accessible tools. In short, these products work as intended, but their interests privilege quarterly retail figures above the interests of makers and creative communities. I remain an enthusiast of at-home printmaking, but this experience has made it clear that creative empowerment cannot be purchased in a neat single package.

Do-it-yourself describes an approach to making, altering, or repairing things without the direct input of professionals or experts. Whether driven by economic factors, the desire to customize a product to suit specific needs, or the pursuit of uniqueness, craftsmanship, or empowerment, choosing to make something yourself means refusing generic market options. DIY culture thus crucially positions itself in contrast to mass production.

This feature of DIY brings a generative tension to creative practices that are characterized by the capacity to produce multiples, such as printmaking and weaving. Printmaking and weaving techniques enable makers to produce identical objects from a single design using materials, a set of tools or machines, and varying degrees of manual labour. This mode of production places particular importance in the nature and capacity of the tools or machines in use. A hand-pressed relief print differs from a silkscreen print, which differs from an offset print. In a similar vein, a textile woven by hand on a frame differs from one made on a floor loom, or on a Jacquard loom. Each object is a function of the tools or machines that made it. 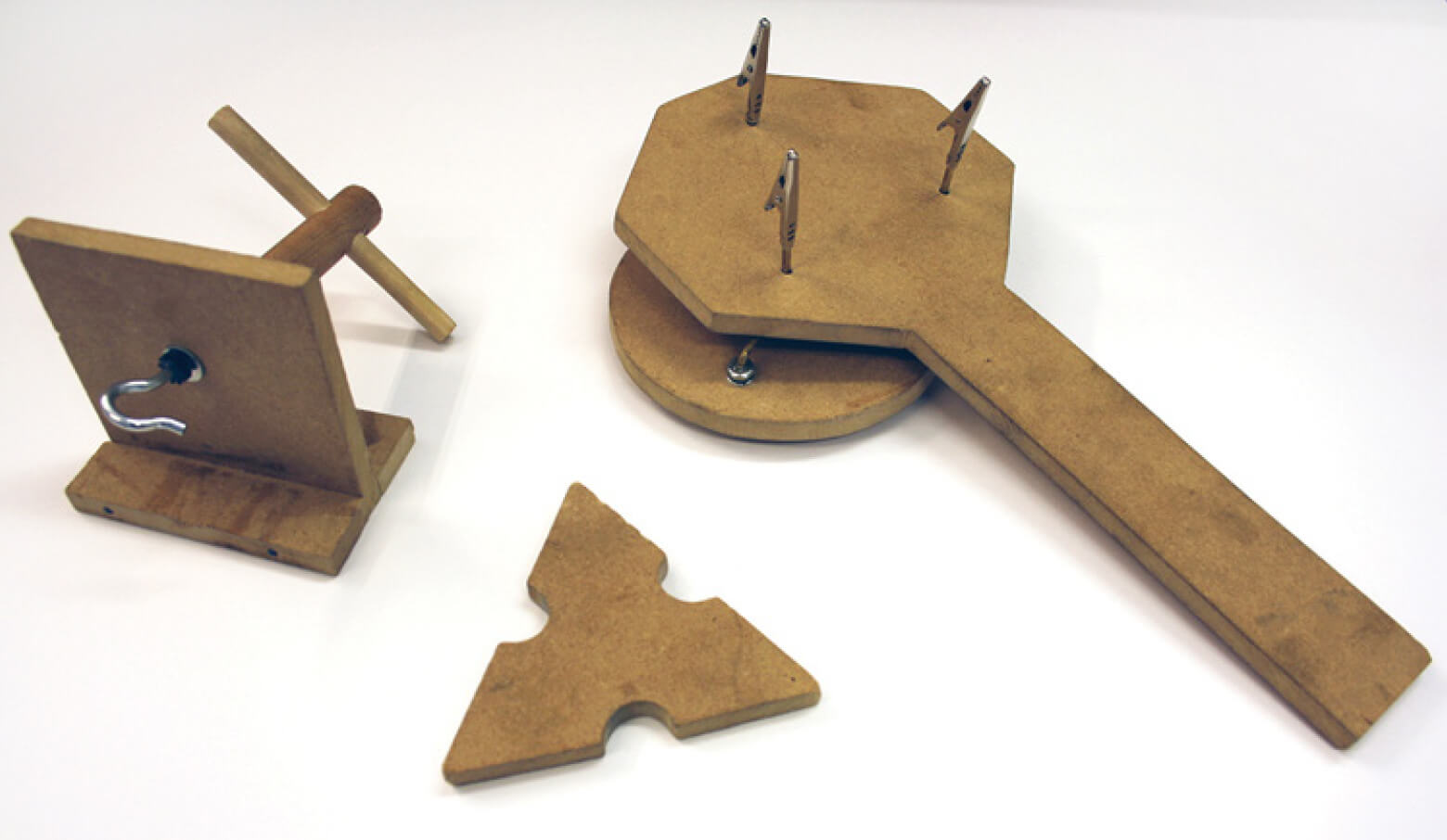 My distinction between tools and machines in this context is informed by conversations with Maritime-based textile artist and researcher Carley Mullally, who describes it this way:

I think of machines as a series of tools combined together. In a craft context, the order is typically hand-tool-material, but with machines it can be hand-computer-machine-material, which is a more precise way of saying hand-tool-tool-tool-material.

Mullally’s work explores the balance between machine technology and traditional analogue processes. She does this in part by researching and creating many of the tools with which she makes her fibre and textile-based projects. Mullally arrived at making textiles by way of sewing, initially as a means of expanding on the selection of materials available to her in her hometown of New Glasgow, Nova Scotia. Material research and experimentation are integral to Mullally’s creative process, which draws from her maritime roots and the seafaring and fishing industries of the region. It is through this lens of intermingling handmade and industrially-made tools that I approach Mullally’s work.

While I recognize that weaving and printmaking extend beyond what can be made on looms and presses, the present text foregrounds these two machines precisely because they can span artisanal and industrial levels of production. Weaving looms and printing presses have followed similar trajectories of increasing mechanization and automation, particularly at the dawn of the Industrial Revolution.2 Automation means more steps in the making process are carried out by machines, or a series of tools, without human input.

When a tool or machine is used to create a piece of work, Mullally explains, there is a separation between the maker and the object. As more elements of a creative process are mechanized and automated, the user’s role shifts from one of skilled craftsperson to that of machine operator. The human relationship to labour is reconfigured as the process of making is partitioned into smaller tasks that privilege the maker’s knowledge of machine operations over mastery of the craft. While automation vastly improves productive capacity, it risks alienating makers from the tools, processes, and product of their labour. Mullally challenges this trend by asking, what might be gained when makers make their own tools? 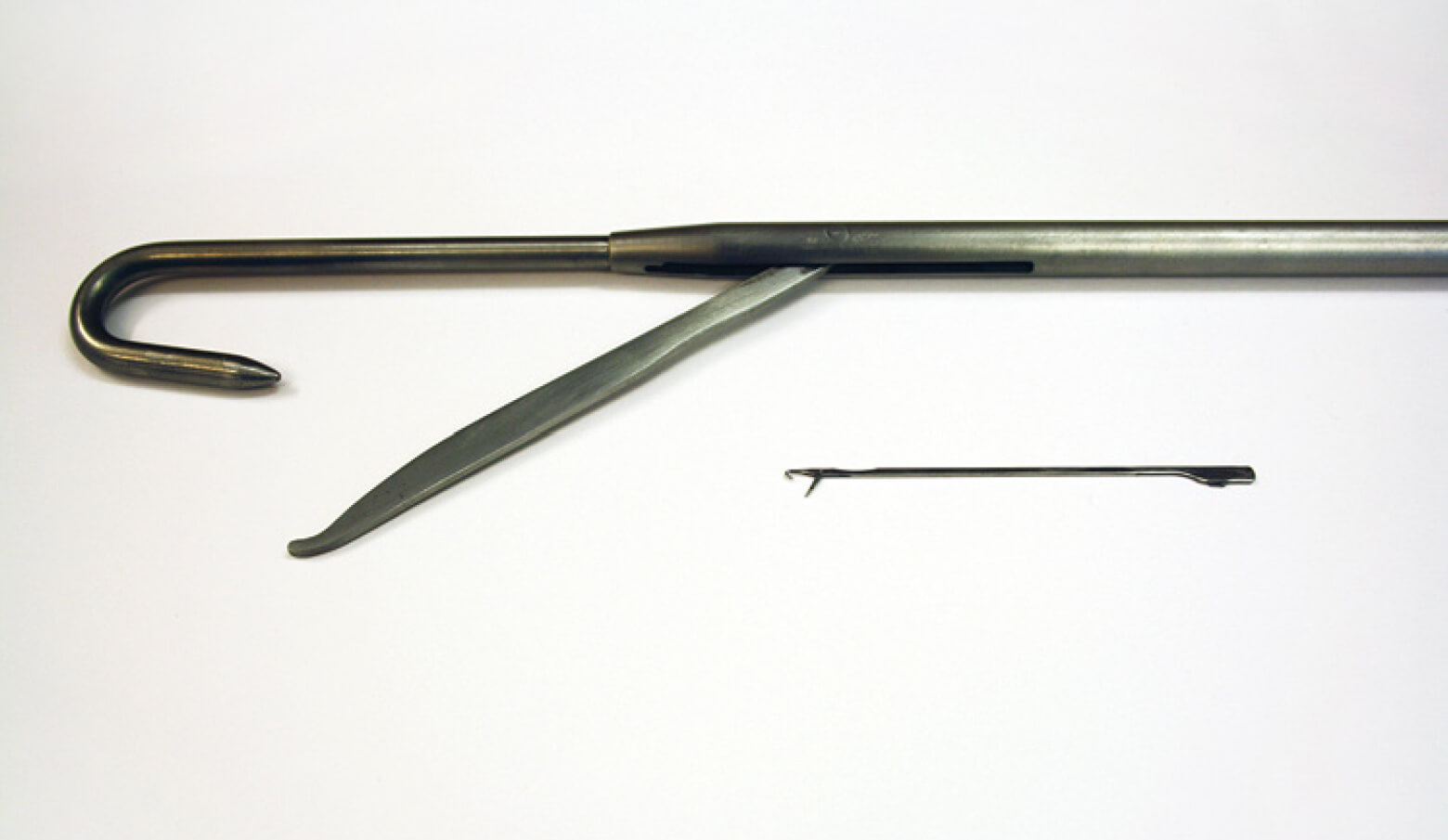 For Mullally, as for many makers, tool making arose out of a combination of material necessity and a certain creative drive. While pursuing graduate studies at the Royal College of Art in London, she contended with the untenable cost of materials. These circumstances led her to research and develop her own tools to create the materials she wanted, largely rope and rope-related objects, from start to finish. Drawing on traditional rope-making and braiding practices and technologies across a range of cultures, Mullally created and tested prototypes for tools precisely tailored to her needs. The final toolset included a range of rope twisters, kumihimo disks (a traditional Japanese tool used to create braids and cords), netting needles, and a giant knitting hook, among others.

By prioritizing process and proximity to material in her research, Mullally asserts that tools can be as important as the objects they make. She explains:

Hand tools or simplified machines — whether presses or looms — connect us to material on a more intimate level. When we make our own tools, the hand has been involved in every step, so the process that’s conventionally hand-tool-material becomes hand-material.

This direct connection between maker and tools has implications for the latter’s durability and longevity. A maker is most autonomous when they have the means and knowledge to repair their tools or machines directly. Where complex looms and presses often require specialized training and parts to repair, and are vulnerable to mechanical malfunction and obsolescence, maker-made tools and machines can be designed to be easily repaired, using transparent schematics and locally-available parts and materials.

How does Mullally’s work extend to printmaking? What might be gained when printmakers make their own tools?

The Open Press Project offers an illustrative case of DIY toolmaking in the realm of printmaking. Martin Schneider and Dominik Schmitz, two designers from Cologne, Germany, identified lack of access to presses as a key barrier to intaglio printmaking. Their solution was to create the Open Press, a small, portable etching press design that can be 3D-printed and assembled using commonly available hardware and tools. In 2018 Schneider and Schmitz published the plans for the press online on Thingiverse, a website dedicated to sharing open-source user-created digital design files. The press design is available free of cost. Users may also purchase physical presses at manufacturing cost or above. The project has grown into an active virtual community, with users sharing tips and modifications to the original press design, and hosting printmaking workshops and exhibitions of miniature prints.

While the Open Press Project has limitations in terms of scale, reliance on a 3D printer, and assembly, it offers a playful and functional entry point to intaglio techniques for those who may otherwise not have access to etching presses. Crucially, unlike Gocco Print, the Open Press is designed to be adapted, remixed, modified, and repaired freely without branded parts or proprietary technology. It is precisely this open-source nature of the project that invites printmakers to make this tool their own and build a community around alternative forms of making.

For artists looking to work at a smaller scale and at a slower pace, creating their own tools informed by communities, practices, and/or traditions that are relevant and meaningful to them can be a powerful strategy to take greater ownership of their work.

Carley Mullally is a textile artist and researcher currently based in K’jipuktuk/ Halifax, Nova Scotia. With a background in weaving, her work focuses on the versatility of off-loom textile processes such as rope-making, knotting, crochet and braiding, and how they can be translated for a wider audience and used interdisciplinarily. Carley’s aim is to continue pushing the boundaries of textiles and their applications, continuing to collaborate with designers, makers and engineers, and to encourage non-textile artists to use these structures in innovative ways. Each collaboration improves upon her own work’s methodology, helping to create an accessible language for understanding textile processes. You can read more about the artist at: www.carleymullally.com

2 The Industrial Revolution is the name given to the period of rapid industrialization in Britain, Continental Europe, and the United States from 1760 to 1840.

Liuba González de Armas is a queer brown woman and cultural worker with roots in Ciudad Nuclear, Cuba and amiskwaciwaskahikan/ Edmonton, now living in K’jipuktuk/ Halifax. Her training is in Art History (MA, McGill University, 2020 and BA, University of Alberta, 2018) with a focus on contemporary Latin American and Caribbean art, particularly state-commissioned Cuban posters of the 1960s and 70s. She served as inaugural Halifax’s Young Curator at the art galleries of Dalhousie, Mount Saint Vincent, and St. Mary’s universities (2020-21) and has worked and interned at the Smithsonian American Art Museum, the Art Gallery of Alberta, and the National Museum of American History.