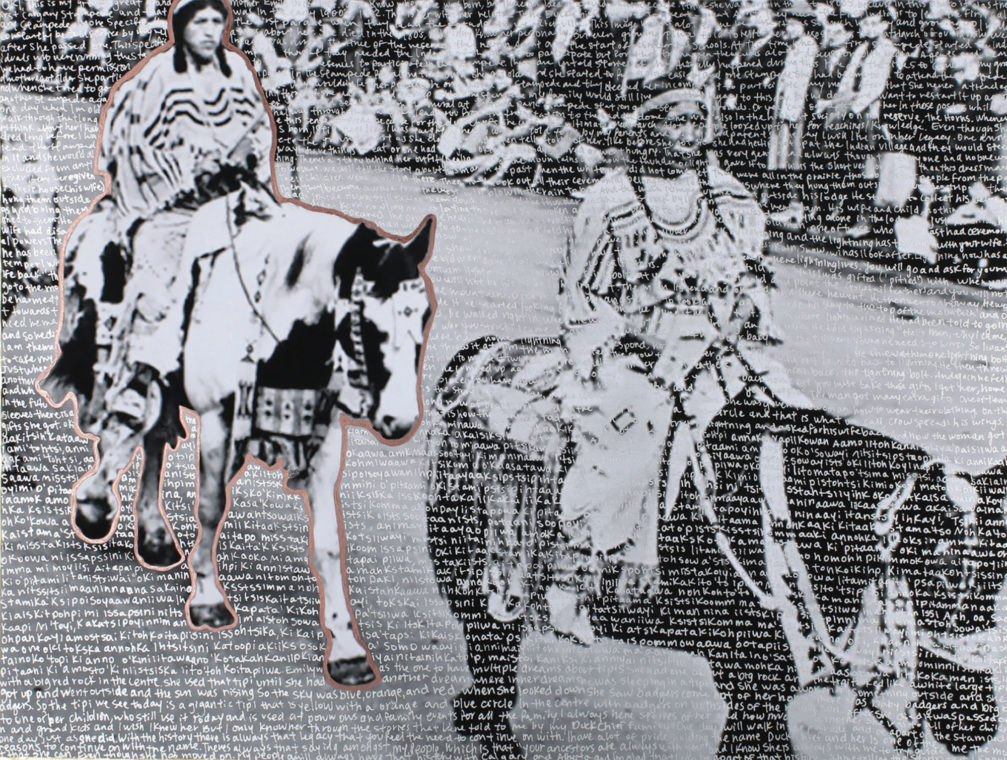 The Matriarch, grandmother, outlined in a halo of rose gold. Naahsa, Nitsiipowahsin for grandparent, is an archival photo of Alyssa Duck Chief’s great grandmother, Emily Duck Chief, the family matriarch, on a horse riding in the Stampede parade. As a means to reclaim familial and cultural stories from colonial narratives, Alyssa scours the Glenbow Museum’s archives for familial photos as well as photos of people from the Siksiká Nation. This image, depicting one of the main matriarchs in the Duck Chief family taking part in the Stampede parade in the mid-1900s, is one such photograph.

Stories of preservation, perseverance, and resistance emanate an aura of gold. In an act of reclaiming history, Alyssa has re-written stories about their Naahsa that they were told while growing up, alongside Niitsítapi tales of how women were gifted the dress from lightning across an enlarged reproduction of the photo. The Duck Chief matriarch enveloped by gold rides tall among stories of her success and resilience. 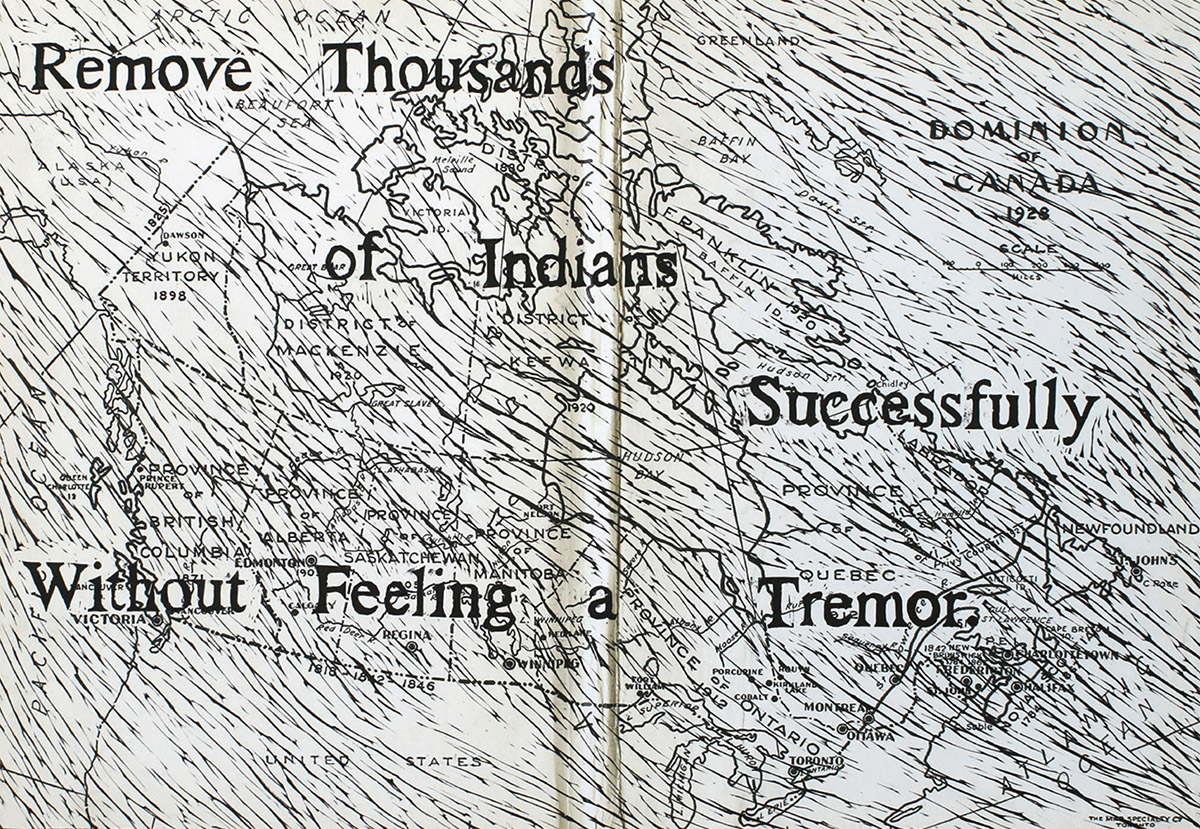 Alyssa Duck Chief’s drawings, prints, and zines embody contemporary Indigenous resistance. Alyssa is an emerging artist from Siksiká Nation and a recent graduate of the Alberta University of the Arts (AUArts) drawing program—formally the Alberta College of Art and Design. It’s a hot June day when Alyssa meets me to chat about their practice. It’s been a few weeks now since graduation and they are taking a deserved break. Alyssa is in the first stages of starting a summer art program on their reserve, a much needed program that would be welcome on many reserves. Reflecting back on their six years at AUArts—a very white, very colonial institution—they express their awkwardness with creating work at a place where they didn’t feel fully supported or receive the critical feedback necessary to grow as an artist until about halfway through their degree.

As a First Nations student, Alyssa has often felt as if they had to make ‘typical’ or ‘traditional’ Native Art and has resisted succumbing to the tropes of how Indigenous artists were and are perceived. The hunger for critical feedback from their peers and instructors coupled with their resistance to being tokenized and stereotyped as another “Native Artist” is what led them to start incorporating Nitsiipowahsin into portraits of their family members. While this marked a significant turning point in their work, it still did not elicit the critical feedback they yearned for from instructors or peers. They recount to me that this outright refusal to provide feedback “charged [them] up” to create something that their instructors would have to respond to. It was then that they realized that everything that they create is a form of resistance. Resistance against institutionalized colonialism and racism, against an institution that does not provide proper support to their Indigenous students. An institution that sees nothing wrong with using the Lodgepole Centre—their Indigenous student centre—for non-Indigenous related activities and events and employs an unsupportive Lodgepole Centre coordinator who tokenizes their Indigenous students. An institution that does not stop blatant racism and discrimination perpetrated by students towards their Indigenous student cohort. When you are in such an inhospitable environment, you can give up or you can resist. For Alyssa, everything that they do, “even down to the clothes [they] wear” is an act of resistance. 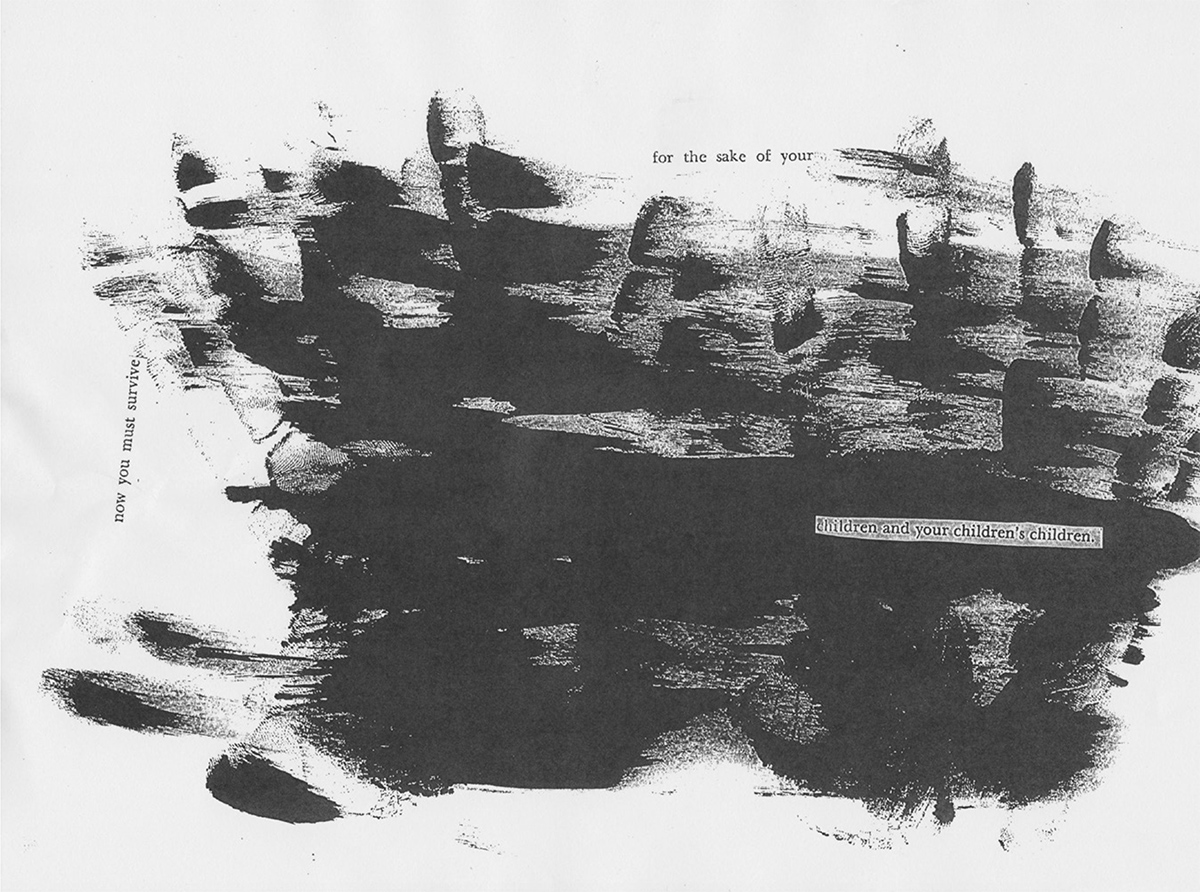 Floating words amongst blurred hands. Hands that have been cared for by those before and will continue to care for those that come after, for as long as they can. Blood memory of their ancestors running through their veins, memories of what they have had to endure, what they have fought to survive. Defied centuries of oppression and sanctioned genocide and to have survived against all odds, against all of their hopes. We must endure and take care of ourselves and those that come after.

Alyssa discovered zines after a classmate had created one. They had never seen nor heard of this democratic counter-culture medium. After researching the history of DIY publishing and creating a few tests, they started to incorporate zines into their practice. The first zines that Alyssa produced were an accompaniment to their larger pieces and were meant to replace a more formal artist statement. Reminiscent of the grungier aesthetic of the punk zines of the ‘70s and ‘80s and the critiques of the status-quo found in the riot grrrl zines of the ‘90s, Alyssa’s zines utilize found and archival text interspersed with familial and archival photos. They copy and copy and copy until the images are distorted, blurred, smudged.

At first, Alyssa was worried that non-Indigenous students or faculty would comment or say something negative about their work and the zines they were producing. When Indigenous people take a public stance and make their voice heard by critiquing settler-colonial power dynamics and ‘reconciliation’ or lack thereof, it is often pushed back by those same people, the same institutions, that they are critiquing. After reading the work of Indigenous authors and with the encouragement of a friend, Alyssa continued taking up space to criticize present day colonization throughout their zines and print works.

As an Indigenous person in so-called Canada, resistance is an integral part of everyday life. It is a fundamental part of being Indigenous. Since the advent of colonization, the First Peoples of Turtle Island have been fighting for sovereignty, for the right to just simply exist. It is no different today. We are still fighting for our culture, our language, our land, our existence. We resist the hegemonic wills of a government that up until recently mandated our extinction. As an Indigenous women from a long line of powerful matriarchs in so-called Canada, I resist and fight the dominant narrative of outright refusal to name the genocide against other Indigenous women. Our refusal to comply with the status quo means our survival.

Through their artistic practice, Alyssa takes back the narrative of their familial history from colonial institutions and resists acts of colonization by asserting their Indigenous presence and sovereignty. They are direct with their beliefs and do not back down. The resiliency in their work echoes and reverberates like the sound of a drum.

For more about Alyssa Duck Chief, visit their Instagram profile.

Lasting Impressions: Christi Belcourt and the Potency of Indigenous Printmaking
My Process: An Interview with Adebayo Katiiti