Lasting Impressions: Christi Belcourt and the Potency of Indigenous Printmaking 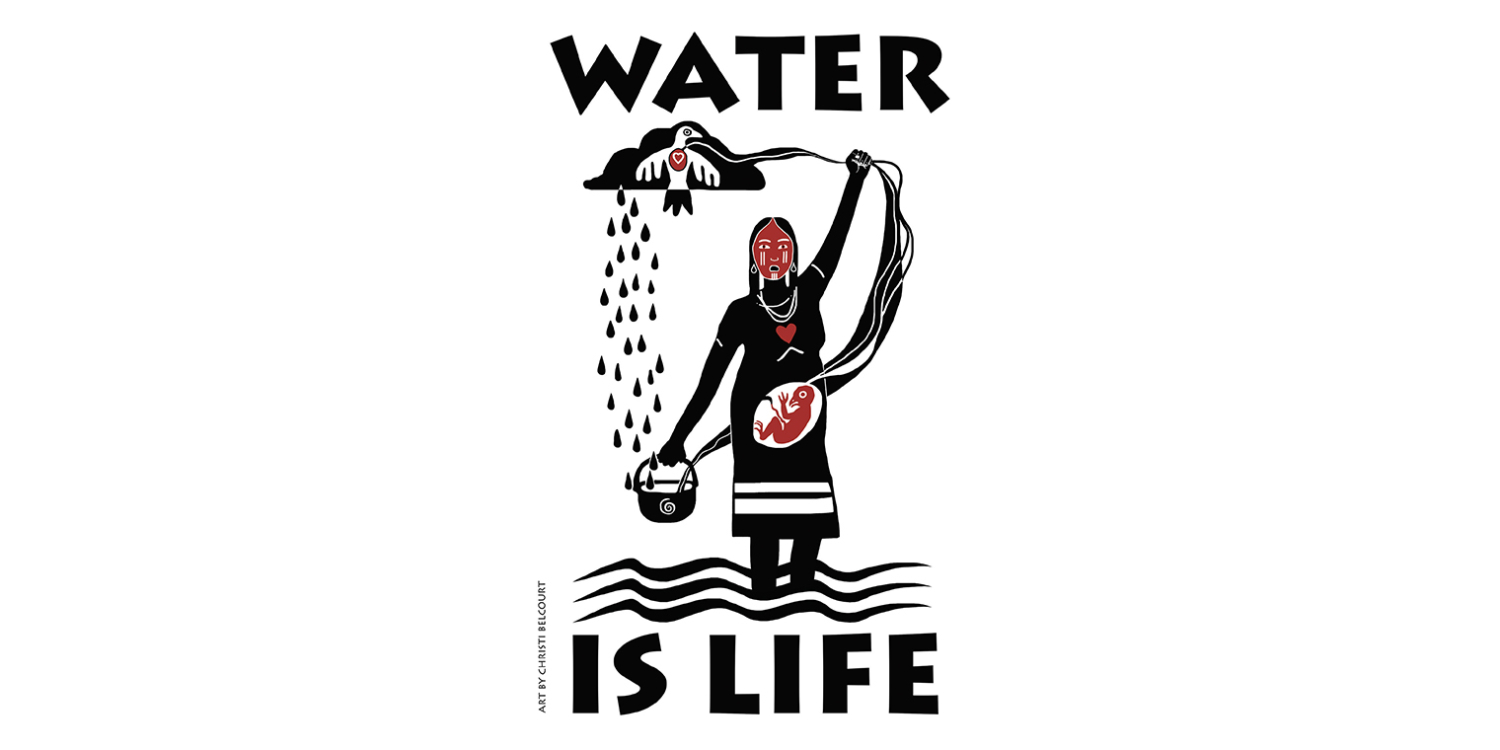 On a bitterly cold January evening, I stood alongside approximately 250 people at Beaver Hills House Park in Edmonton to protest the RCMP’s aggression on Wet’suwet’en Territory. Located in northern British Columbia, the hereditary Elders and Chiefs of the territory opposed Coastal GasLink’s plans to build a pipeline through their traditional homeland to the coastal port of Kitimat.1 Indigenous people across Canada saw the injunction by the RCMP and the subsequent arrest of land defenders as one of the many times the Canadian government has tried to suppress Indigenous sovereignty. 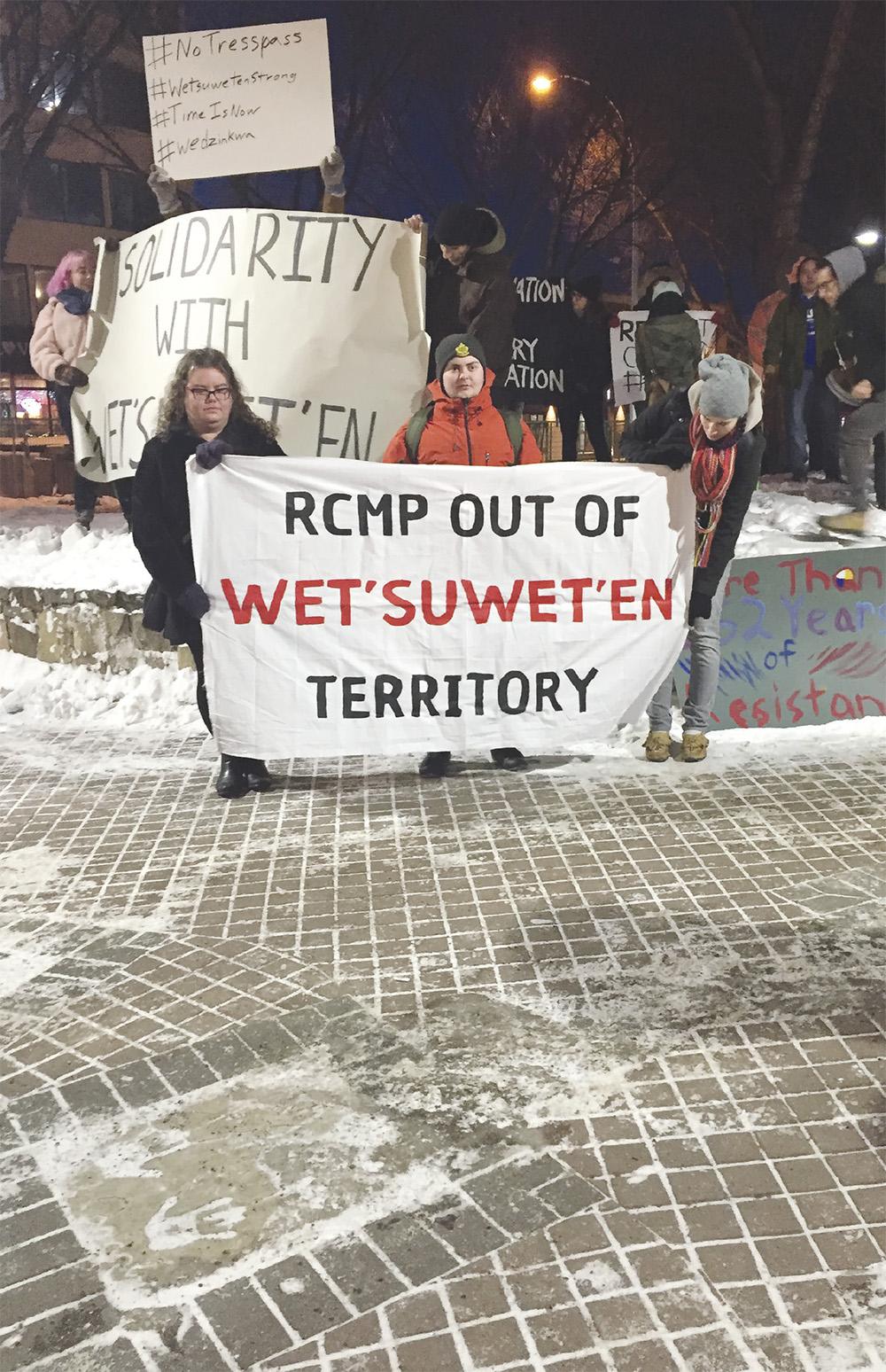 As I looked at the all signs made at the protest, one thing became immediately clear: many of the images and slogans used either directly or partially drew inspiration from the work of Nehayiw Michif (Cree Métis) artist Christi Belcourt and Anishnaabe traditional teacher Isaac Murdoch. Screen-printed or photocopied, these images showed the cyclical nature of life on Earth. Most prominent was the image of a standing pregnant figure with her fist raised, whose womb emanates water which cycles through her fist, directly connecting to the sky, which then flows from the heavens in the form of rain into the figure’s pail, an homage to the copper pail used by Indigenous water walkers across Turtle Island. Inside her womb is a baby Thunderbird, a reference to the traditional story told by Isaac Murdoch. The image, sometimes called “Thunderbird Woman’s Mom” uses traditional historical references while also referencing current movements of water protection actions and Isaac Murdoch’s Thunderbird Woman. Pared with the images, phrases such as “Water is Life,” “Consultation is Not Consent,” and “Mother Earth Revolution” are used to solidify its Indigenous rights messaging. Many of these images have been made available for free and can be downloaded through the Onaman Collective’s website.2

These striking and powerfully illustrative images help communicate the urgent issues facing Indigenous peoples across Turtle Island today. Issues related to access to clean water, the safe-guarding of the land and its resources as well as the survivance of Indigenous languages and the protection of children from child services are just a small fraction of the challenges the Canadian government and its settler citizens have placed on Indigenous communities. Through their work, Belcourt and Murdoch seek to resist the narratives circulated not only by proponents of pipelines, but also the federal, provincial, and municipal governments who continue to undermine Indigenous self-determination.

Indigenous printmaking has a unique history in Canada. While the Inuit have long incised images on ivory, stone and musk ox horn, printmaking on paper has a much more recent history.3 Some of the first printmaking co-ops began as government sponsored programs in the Arctic as a way to create alternate economies for the Inuit during the 1950s and 60s. From the co-ops emerged notable artists such as Kenojuak Ashevak, Pudlo Pudlat, Napachie Pootoogook and Jessie Oonark. The images made by these artists ranged from scenes of everyday life to creation stories, Inuit architectural structures to the migrations of caribou. Since the 1990s, Inuit printmakers have increasingly represented more biographical narratives, depicting domestic strife, romantic love, and the various ways in which governmental resettlement programs have altered Inuit life.4

In Northwestern Ontario, the Triple K Cooperative, founded and operated by Cree brothers Goyce, Henry, and Joshim Kakagamic sought to provide and ensure that means of printmaking production stay in the hands of Indigenous artists. The incentive to creating the co-op came from brother-in law Norval Morrisseau— whose fame and skills as an artist motivated the brothers to establish their own artistic practice. Founded in 1973 in Red Lake, Ontario, artists such as Paddy Peters, Saul Williams, and Norval Morrisseau, created high quality silk-screen prints through the Cooperative.5 Three years before Triple K Co-op, Anishnaabe artist Daphne Odjig and her husband established Indian Prints of Canada Limited with her husband Chester Beavon to further her career and those of other Indigenous artists.6 The works from these collectives can now be found in museum and art gallery collections across this country now known as Canada.

Along similar lines, the establishment of the Northwest Coast Indian Artists Guild in 1977 also sought to produce and promote the print-based work of Indigenous artists. Prior to the establishment of the Guild, the first published silkscreen print was the Soogwilis: An Indian Legend (1951), that “represent animals from the natural and spiritual worlds such as eagles, whales, bears, thunderbirds and the sisiutl or two-headed serpent. Images of transformation such as a figure with a bear’s head and salmon tail are also included.”7 As Secwépemc artist and curator Tanya Willard notes,

Many of these early works depict formal and conceptual elements specific to the Northwest Coast that would influence other First Nations artists who wanted to re-examine examples from their families and communities that had been suppressed by the residential school system and other forms of colonial control.8

The practice of articulating resistance through printmaking endures. Moreover, the images Belcourt and Murdoch have created continue to evolve and adapt. From prints and banners, they now appear as murals in public and educational institutions. The duo have also used their images on clothing, which are is sold to help fundraise for the language camp in Northern Ontario. The Nimkii Aazhibikong camp brings together Elders and youth for learning and teaching of languages such as Anishnabemowin. Additionally, practices such as hide tanning, tattooing, and pigment harvesting have been part of the camp’s dedication to Indigenous-led learning.9

A number of next generation Indigenous artists continue to take up printmaking. Anishinaabeg artists Christian Chapman and Chief Lady Bird have melded screen-printing and digital techniques to create images that merge traditional and contemporary themes. As the founding member of the Justseeds artist collective, Métis/settler descent artist and scholar Dylan AT Miner has both created and worked alongside print artists to support Indigenous sovereignty, migrant and immigrant rights. Kinnegait-based Inuk artist Shuvinai Ashoona’s colourful prints, and more recently collaborative work with artist Shary Boyle, has shown the intersections of everyday life and the fantastical. Artist Sonny Assu (Ligwildaʼx̱w of the Kwakwaka’wakw Nations) has merged the formline aesthetic of the west coast with pop culture references to create posters, prints, and banners.

Intertwined with the affordability of materials, ease of reproduction, and its collaborative nature, printmaking has been a creative site for Indigenous resistance. Belcourt and Murdoch’s images have been used in various grassroots movements, and I suspect, will continue to circulate as long as apathetic people hold power. When lands are returned, pipelines stopped, languages are recognized, the protection of clean water, and self-determination is achieved — all possible aspirations for the here and now — the images will attest to the history of Indigenous resistance. Future generations will look at the images as proof of the values and ideas shared to ensure an equitable life for all living and inanimate things on Earth.

1 The proposed Coastal GasLink (a subsidiary of TransCanada) pipeline will carry natural gas to the Pacific coast where a liquefied natural gas project is scheduled for construction. For more, see: https://www.cbc.ca/news/Indigenous/wet-suwet-en-camp-anti-pipeline-rallies-1.4969916