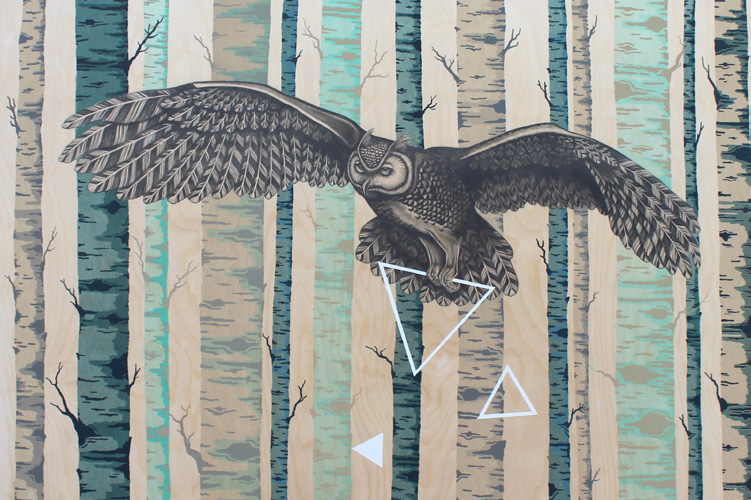 born: Peace River, Alberta (Grew up at Powder King, BC)
education: BFA (Honours in Printmaking) University of Calgary 2011
favourite artists: Zaria Forman, she documents changing glaciers landscapes in pastel on paper and they are stunning!
favourite book: Anything written by Thomas King
favourite films: Elf, and The Fifth Element
favourite albums: Don’t know about a whole album, but favourite songs, “Give Me One Reason” by Tracy Chapman and “Pennies from Heaven” by Louis Prima
music playing while printmaking:Jazz. Louis Prima, Ella Fitzgerald, and Nina Simone make me dance around the studio and get stuff done!

I first met Caitlin Bodewitz March 11, 2017 at the “By Curated Market” in the Prince of Wales Armouries in Edmonton. Her booth was dominated by her large-scale print, “Befriend the Unknown.” At the centre of the print is an owl in flight. It grips a triangle in its talons and flies against a backdrop of tree trunks in varied muted colours and textures. Two smaller triangles seem poised to drop to the forest floor. But the prediction could be illusory—perhaps the owl really means to grab the other two triangles before they escape. “Great horned owls represent this notion of deception. They cannot be deceived. I liked the literal sense that owls fly in the dark. That can be interpreted in the unknown. They thrive in uncertainty,” says Bodewitz.

She also draws on the image of a triangle for a more personal, metaphorical meaning in her art. She develops ideas through the perspective of a triangle’s three sides: autobiographical (a direct profound reflection), aboriginal (respect for indigenous culture), and academic (research-based and a social justice). Bodewitz is not of indigenous heritage and feels it is important to emphasize she makes no claim to an indigenous history. She gained knowledge of indigenous culture growing up. Her mother was adopted by an Algonquin Métis woman, the closest settlement was the MacLeod Lake Band Reserve where she completed her early schooling. Bodewitz attended high school in Mackenzie, B.C. She also minored in Aboriginal Studies at University.

She has strong feelings about cultural appropriation. “People taking without asking is a form of neo-colonialism,” she says. “I am 100 per cent coming from an educational and experiential aspect that is respectful to elders. If you have stories shared with you, you ask if you can use them. In a gallery setting you need to have a written statement that says, “I have permission.” There needs to be a clear attribution.” She says context is important. “Where those images are coming from and how you’re using them and why. It’s not just an aesthetic symbol.”

I talk with Bodewitz again at SNAP, where she has studio space full of old, weathered doors, reclaimed wood and, of course, her prints. Tacked to the wall are vinyl LPs she’s printed on. Bodewitz tells me it’s important to her to be an environmentally responsible printmaker and she tries to reflect that in her process. She spends a lot of time in the studio at SNAP. “I’m able to be a professional because of this space. I wouldn’t be able to be as far as I am were it not for this space.”

Though Caitlin Bodewitz has chosen to live in an urban setting, staying connected to the outdoors is very important to her. “My art is entirely about finding the balance between these two foreign realms. It’s a necessity to find balance between the two,” says Bodewitz. When she first came to Edmonton four years ago, she stayed with her partner’s parents in their home near the river valley where porcupine, deer and owls were regular visitors. Bodewitz was inspired by the way animals could live in harmony with this urban environment and welcomed these wildlife encounters in the city. “I want to be able to reflect on a personal basis, that’s the way I can authenticate.”

Bodewitz was raised in northern B.C. with a view of Powder King Mountain in her backyard, so she feels a connection with these animals. Her travels have led to other encounters with animals—turtles in Hawaii when she snorkelled for the first time, sperm whales and native birds while visiting New Zealand, sea otters, and polar bears. Animal and nature imagery is a recurring motif in her prints.

Bodewitz strikes a balance between urban and nature and she also aims to strike a balance between the artistic and purely practical. Market settings are an opportunity for her to display her prints to a wide demographic. “You never know who’s walking through, so I keep price points and items diverse. A large piece draws people in but buyers might take something smaller.” But she also emphasizes the importance of an online presence— online store, website, social media—to help get her work in front of an audience and potential buyers. She sold one of her most expensive pieces to someone who saw the piece on Instagram. “I am so grateful to be able to live as a full-time artist and sustain myself. I’m craving my next step of gaining new knowledge,” she says. “I want to push my practice, working big, working outside.”

When did you begin printmaking and what drew you to it? I wasn’t actually introduced to printmaking until university in Calgary. I took the introductory class to silkscreening with Professor Bill Laing and continued to take lithography and etching, but, mainly focused taking silkscreening to the advanced levels. During my first year of university I found the process of learning the fundamentals of all the other practices (drawing, painting, sculpture) very segregated and when I was introduced to printmaking I found that I was able to play with all those other forms of mark-making through one process. I fell in love knowing I didn’t have to categorize my aesthetic or practice, while being able to explore all kinds of gestures and marks.

How does nature and the outdoors influence your art? Completely, entirely, and unequivocally. If I wasn’t able to adventure in the wilderness, I wouldn’t be able to make art! My personal experiences in nature, the landscapes and wildlife, and the history of the land constantly fuel my art. Not only do my images come from direct personal experiences of being outdoors, but my respect for nature also influences the materials and processes I try to be as environmentally mindful as possible. I print on birch wood to directly bring nature indoors and it also allows me to avoid excessive plastic sleeves or framing, use water-based ink to avoid cleaning chemicals, and I even use corn-based biodegradable tape!

What printmaking processes are you drawn to and why? I primarily work with silkscreening as I love its ability to explore both organic and graphic imagery and also its ability to be transferred onto a variety of surfaces and integrated with different mediums. I integrate silkscreening with my photo-transfers and large scale drawings. I was also drawn to the process of having to come up with your final image first and then deconstructing it into layers and working backwards.

How do these processes inspire you and your work? The action of having to really break down your images forces you to slow down and spend a lot of time with your image and ideas. I feel this directly reflects my admiration for nature and what I try to bring into the eyes of the viewers. It forces you to slow down, focus, adapt, and commit. These processes are labours of love but, I feel, are invaluable.

Where do your ideas for printmaking originate? Primarily from being outside and new encounters with different landscape and wildlife. But ideas for full compositions come together when I’m back in the studio, reflecting on those experiences in an urban setting.

What project(s) are you currently working on and what are the connections to nature and the outdoors? My current “Balance” series is constantly dealing with nature versus geometry to explore this idea of two opposing realms and how to find balance between them. Nature is what I love being in, what I love learning about, and what I love educating people about, so I’m certain it will always be at the centre of my work. Moving forward, I plan on tackling more large-scale drawings with silkscreens, several art markets, and commissions to keep me busy during the summer and “Vignettes,” an interior design competition, in the fall.

“Vignettes” showcases the local talent and craftsmanship of Edmonton, including designers, visual artist, wood workers, furniture makers, and suppliers. This will be my fourth year participating and it is always an incredible amount of work with such a rewarding experience.

Can you describe your creative process? My creative process admittedly starts with a general idea or composition, but I commonly don’t truly know what I’m trying to depict until I stand back and look at the finished piece and realize what my original intention was all along! My art always seems to have a better way of say something than myself can. My overall process usually starts with rough sketches, looking at reference photos, then starting to work on compositions on tracing paper, then finally transferring my general line work to the birch wood. Once my line work is on the wood, I start freehand drawing the figure. I then seal the drawing and entire wood surface in preparation for silkscreening. Finally, I draw my geometric design as stencils and silkscreen the design into the drawing.

Is there a daily work routine that you follow? The joys of being my own boss lead to every day being different…but a typical day involves music on, prep photo transfers, expose screens, silkscreen, rub photo transfers, go cuddle my cat. And the unromantic side, but equally as important, of being an artist is being a business woman. So some days are staring at computers screens, shipping orders, phone meetings, professional development, and taxes!

What are your artistic goals? My goal is to simply share my art with as many people as possible. In the big picture I’d love for my art to have an impact on the conversations about our responsibility to protect our planet, one piece at a time. I wouldn’t argue with a couple solo exhibitions allowing me to travel and explore the world either.

How important is the incorporation of text in your print images? I think I love the idea of art as a form of story telling and by directly putting text into an image it’s just an immediate way to start the dialogue. The text I include has a direct personal connection for me to the land or animal in the piece but it can also act as a starting point for the viewer’s own reflection.

Land and Childhood – the narratives that come from it
Against Nature