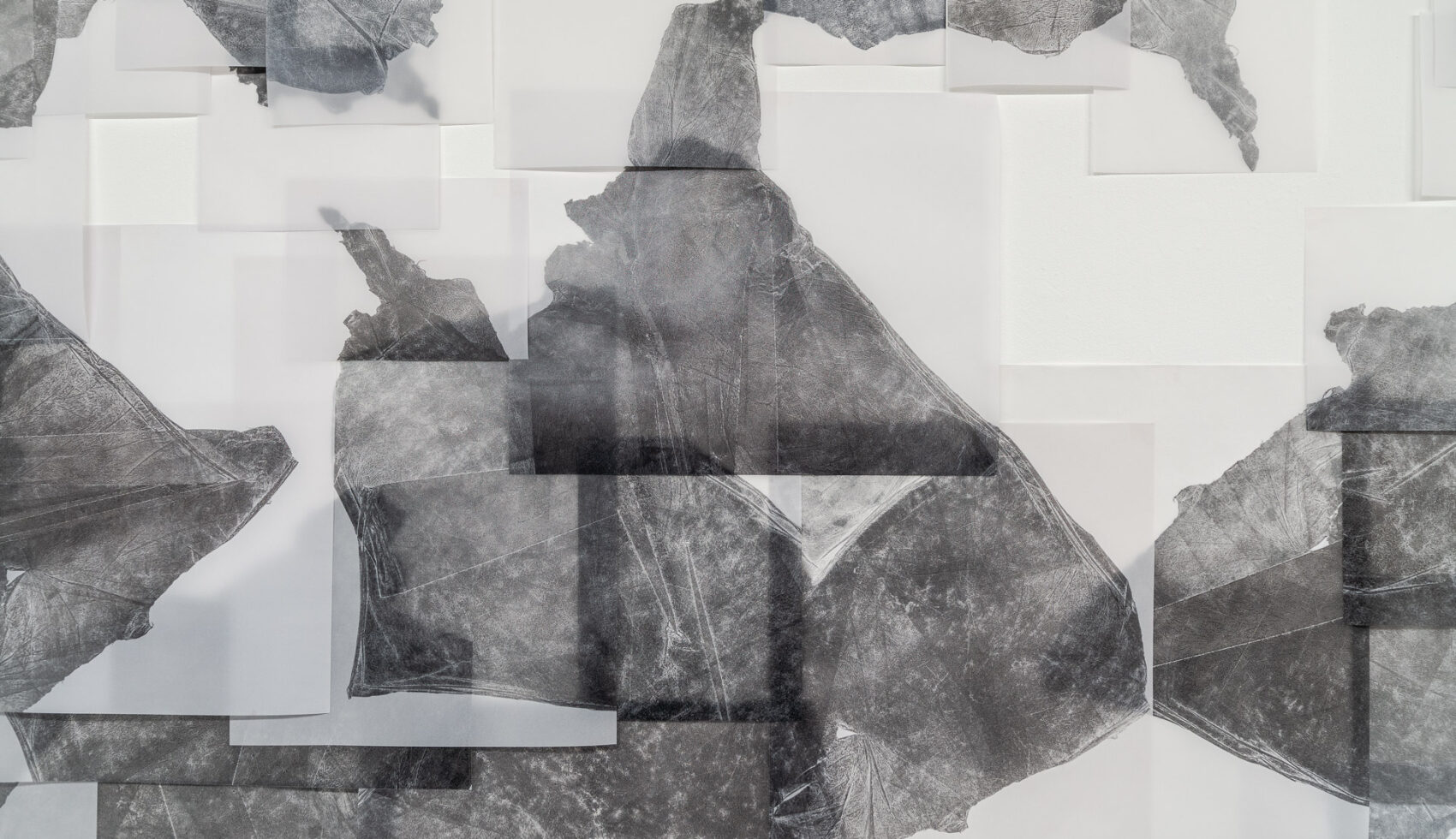 SNAP is pleased to present synthesis, an exhibition by Hildur M H Jónasson in the gallery from January 21 – February 18, 2023.

synthesis addresses ecopsychology or the psychological, emotional and spiritual side of the climate crisis. This exhibition touches on hope/despair, creation/destruction and beauty/ugliness in our human/nature relationship. The work is created using either natural elements, including glaciers or human generated waste in the form of plastic pollution collected from the high Arctic.

A letter to the future

Ok is the first Icelandic glacier to lose its status as a glacier.
In the next 200 years all our glaciers are expected to follow the same path.
This monument is to acknowledge that we know
what is happening and what needs to be done.
Only you will know if we did it.

In 2012, I moved back to my country of birth, Iceland. It was then, that I learned that a particular glacier (Snæfellsjökull*), was predicted to be gone around the year 2050, which could be within my lifetime. This was shocking, like receiving news of a loved one being diagnosed with a terminal illness, an immense grief of an impending loss. The climate crisis took a personal and an emotive shift for me. Two years later, the glacier Okjökull was the first glacier to lose its glacial status and was memorialized with a plaque where it once existed.

A few years ago I was a participant on the Arctic Circle Artist Residency – a two week voyage on a tall ship that meandered around the archipelago of Svalbard, Norway, much closer to the North Pole than the Arctic Circle. We were a group of thirty artists from around the globe along with guides and a crew. It is difficult to put into words the experience as I am still coming to terms with the visceral quality of this mythic-like part of our world. I had carefully planned some projects months before I set out for this trip but by simply being there, there were works that were created in direct response to the Narnia-like environment along with opportunities that arose.

I fished glacial fragments out of an icy fjord and created experimental cyanotypes where the weather, temperature, sun, and ocean became cocreators. The prints were simultaneously exposed and developed as the “bergy bits” melted while the sunlight travelled through them. As a result, each print carries its own ephemeral personality created by the melting ice. Glaciers are like ice fossils that hold climatic information dating back to tens of thousands of years but as they melt that knowledge is lost.

I created a print (frottage) with a glacier using the weight of my body clad in a paper thin shroud as I rolled over its surface. A canvas remnant gifted by a friend years ago along with loose charcoal and a non-toxic fixative recorded the texture of the monolithic ice. Generously filmed by Brandon Holmes, I was able to document this performance; a nod to biophilia and a reference to Ana Mendieta’s earth/body work.

Throughout the excursion there were small, unsightly clues of humans – a toothbrush tucked amongst pebbles on a beach, small pieces of fishing nets lying under a shell. On one island, my group and I came across a beach that was laden with garbage – the ocean currents don’t discriminate and carry whatever comes their way onto certain shores on this group of islands. We cleaned up all the trash – fishing nets, life preservers, faded and worn plastic pieces ranging in sizes. I dug a large plastic bag out of the sandy beach and noticed some stippling on it from tonnes of pressure from the sand. The bag may have been clear at one point and had yellowed but was still intact. It became a part of my trash collection that I would bring back to the studio.

My first experiments with the bag in the studio were inking it up and hand printing it – the result was disturbingly beautiful mark making. There is an absurdity to something so ugly transforming into such an intriguing visual language. I played with composition, folding the bag and created multiple monoprints. I took a deeper dive into inking and printing the plastic, I have spent the last few years pushing the process incorporating scale, textiles, collage – a maelström of work from large installations to glacial-like images.
My plastic bag has torn into a few pieces, lost some texture from the printing press and is stained mostly blue now from the palate I’ve chosen – even plastic has an ephemeral quality in that sense.

Plastic is a direct product of the fossil fuel industry and symbolizes capitalism/consumption—it’s a monolithic marker of the Anthropocene. It is our Pandora’s box, an unleashed monster, both creative and destructive. Plastic is not a simple problem, it is multifactorial – we all know that single use plastics are bad, but a lifesaving operation would not be possible without it.

While researching plastic over the last few years, I came across a marine biologist, Dr Sylvia Earle. Dr Earle has helped to clean up the oceans and create protected marine parks throughout the world that have been named Hope Spots. Although Hope Spots are a small (but positive) part to our overwhelming situation, I have started to direct my gaze towards these victories with cautious optimism. There are many other hopeful inventions such as biodegradable plastic liners created out of seaweed.

Perhaps plastic will become our fossils of the future as we steer towards the Symbiocene?

Hildur Jónasson (she/her) self describes as a printcentric, multi disciplinary artist. Her love of printmaking informs her art practice as she approaches her work with a printmaker’s eye. She explores themes of our relationship to nature at the intersection of the climate crisis, natural phenomena, and the folklore/mythology of her native Iceland.

Hildur is an emerging artist who has exhibited in Canada and internationally. Hildur has participated as artist in residence at The Banff Centre, The Arctic Circle Artist Residency and The Toni Onley Artists’ Project. In 2019, Jónasson was awarded the Don Wright Scholarship at St Michael´s Printshop in St John´s, Newfoundland.