When to Stand and When to Run… 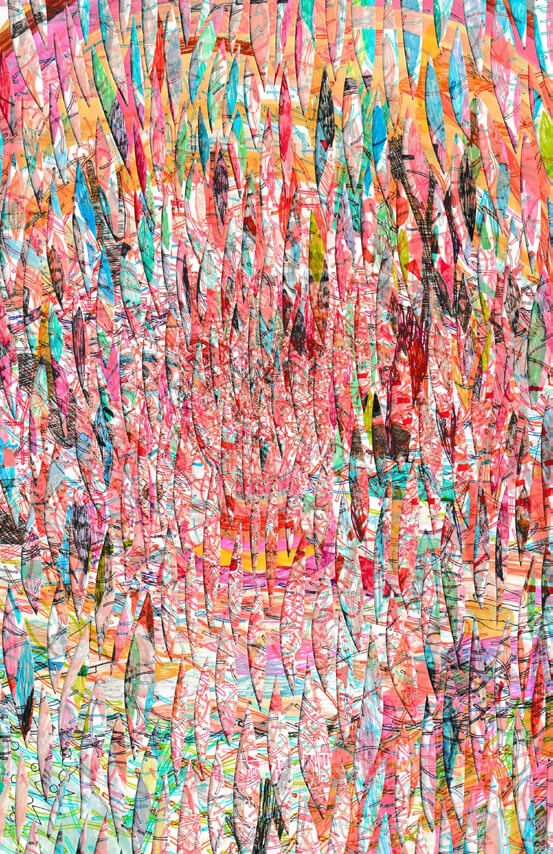 Cady Noland, Patron Saint of Private Artists, opened a show (THE CLIP-ON METHOD) at Galerie Buchholz (17 East 82nd Street, New York, NY) on June 17th, 2021. Prior to this, her last showing of new work was followed by a studio silence of two decades, interrupted by a blip on the radar in 2008, when she quietly exchanged an older work in the collection of the Walker Art Center for a new one (untitled, 1 metal basket, 2 motorcycle helmets, 1 film reel, 3 subway straps, metal). Her actions in 2008 and 2021 were not initially publicized, but detected by ardent Noland acolytes who are tuned to her signal like those who track and record number stations; those intermittent channels, apparently run by global intelligence networks, broadcasting empty static punctuated by ciphers.

Noland’s work is at once stoic in its indictment of interconnected capitalist pathologies, and austerely coded in tactics; not unlike the number stations, with their buzzing of electric razors in boxes, or women repeating Yankee… Hotel… Foxtrot… into the ether. She at times issues statements, to the public and to those she litigates, which are all too often held up as decoder rings to her modus operandi. Nevertheless, the ability of her art and words to reduce to the didactic is low.

Noland’s spectre hangs over the millennial art world like an absentee landlord, omnipresent in discussion even when she has made herself and her artwork scarce. I think about the other ghosts who linger in the minds of artists, gallerists, critics, and the public. Agnes Martin’s monastic retreat to the desert, or Duchamp’s public persona as ‘retired artist’ turned chess player. Lee Lozano’s refusal to engage the art world, begun gradually in 1969, became her final work, and continues on past her death, I suppose, into the present and on to the future (ouija board pronouncements and reincarnation not-withstanding).

The works of private artists are ripe for this kind of haunting, appearing as they do like ectoplasm on the table of the Spiritualist medium: evidence from a world not our own. When I read the call for contributions for this issue of SNAPline, which starts: “An artistic practice in printmaking is rarely private,” I think of those artists who defy this pronouncement—rare birds, or odd ducks, who disperse their work outside expected systems, or who make their images after hours as passion projects, or who have shown powerful bodies of work and then pull away. 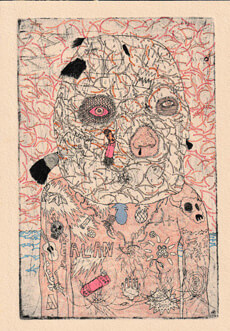 Ryan Cain agrees to a conversation about his work, which he shares online through the anonymous handle da___ da___da___da, and which otherwise arrives via text or DM in litanies of uncaptioned images interspersed with musical recommendations. I think here of Ray Johnson’s carefully coded collages— moticos—sent through the mail to his ‘correspondance school’. Johnson largely avoided traditional exhibitions, preferring to arrange meetings of his ‘school’ (during which he might himself be absent), or to stage ‘nothings’ (as opposed to ‘happenings’). 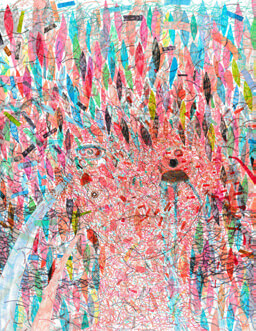 Like Johnson, Cain’s is a roving eye that sets up generous connections between ideas that do not immediately correspond. While acknowledging the influences of historical masters like Goya, Redon, and Dix, Cain’s more contemporary inspirations—Tino Seghal, Krzysztof Wodiczko, and Teresa Margolles—deal in more transient forms which often live on primarily as memory, always at risk of becoming forgotten. To put one of Goya’s Disasters of War up against the minimalist memorials to victims of cartel violence created by Margolles, it becomes clear the exhausting consistency of human violence—and in turn to triangulate this takeaway into dark interpretations of a work like Tino Seghal’s This Progress. Looking at Cain’s artwork has a similarly telescopic effect.

His figures stare off into space, or past the viewer through the picture plane. Behind masks or flurries of calligraphic marks obscuring their faces, they hover between coming together into solid beings and falling apart into the space between their atoms, rendered in static and snowfall, or viewed as if through stained glass windows or a school of particoloured minnows. The work becomes ever more densely layered: a drawing or etching you once saw seemingly complete might get cut into a mesh-like form, revealing other accumulated marks through the perforations. Within their maximalist aesthetics, close viewing is rewarded— every inhabitant of the horror vacui is the correct answer to an unwritten I Spy or Where’s Waldo?.

I ask Ryan about the intensity of this layering, and am met by one of his characteristically stream of consciousness replies: “[Incise] or take away enough of a moment in times again many marks given edit remove restart without canvas or camera in life like flowering engulfing resonance then just embrace breath and vanish.” 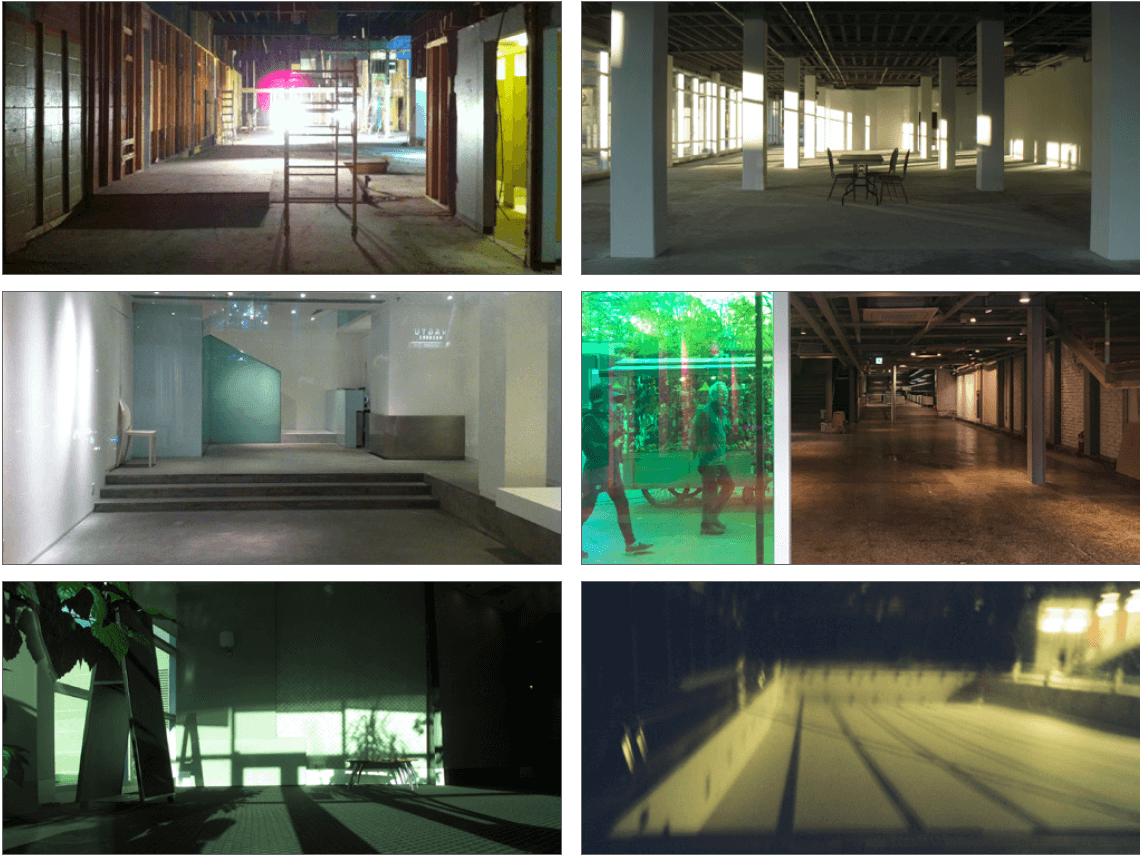 When C. Couldwell agrees to be interviewed, she politely leaves me an exit; mild protests that she isn’t a full time, or even necessarily a part-time, artist. A dabbler maybe, an amateur perhaps. If she’s not right for the piece, I can look elsewhere. For an amateur, however, her results appear dedicated: since 2006, she’s taken over 600 photos in an ongoing series peering through the windows of offices and businesses after hours. While she takes pains to avoid repetition, there are forms and symmetries to the urban landscape that prevail, telling us about ourselves even in our physical absence.

In exhibitions, the small size of the images makes you lean in close, recreating Couldwell’s curiosity as she cups her hands around her eyes and then fixes her camera through the window: “I could see into this place, which as a workplace is both public and private, and document the space and the artifacts left behind by those who were there.”

Her interest in photography began while working at The Gateway student newspaper at the University of Alberta. One could understand the various adaptations of her project into different formats as a legacy of this journalistic education, where every photo has the potential to serve different authorial narratives based on its arrangement on the hierarchy of the page. To date, her photos have been hung in grids, output as a poster, turned into illustrations for a colouring book, and most recently exhibited as a collection of several hundred business-card sized tiles to be interacted with and arranged by viewers in the gallery to form their own narratives.

However, unlike a photo accompanying a news item, Couldwell does not caption her images. They remain an insider’s view of the city, navigable by landmarks rather than street names, familiar and unnecessary to label. These are not the photos of a tourist. To recognize a window scene is to share in a private geography, to feel yourself a local. “Look, there’s the building they’ve remodelled three times in the last decade, and still nobody ever stays long!” These are things one can know about Couldwell’s images, but that the images themselves never overtly tell. 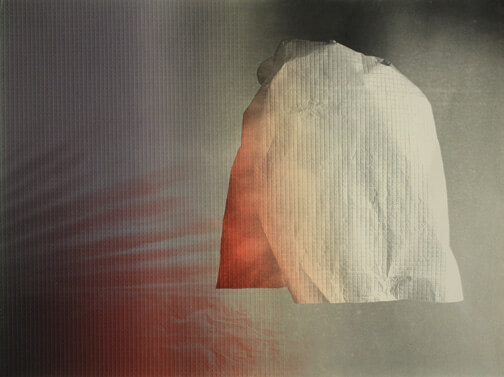 My biographical file on the last artist I profile, Rebecca Aronyk, is thin: born Kingston, Jamaica (Cancer on the cusp of Leo), a BFA from the University of Alberta in 1980, followed by a master’s degree in December of 1982. I consult the 14 slides of work from her MVA exhibit (13 of them still in their slide sheet, #9 found later, by chance marooned in a binder of student work previously gifted to me). Delicate photo-lithographic shadows and screens, soft vessels of paper and plant matter emerging from black and grey, embossed mesh forms and occasional applied elements pricking the illusions with reality. Colours are subdued; flesh tones that stretch between pallid and sunburnt, punctuated by an occasional bright orange or red—and once, by a hovering object fading gold to green to blue like a tropical bird in flight. Titles: “Of Unknown Origin,” “Duality and Contradiction,” “Two Possibilities,” etc. 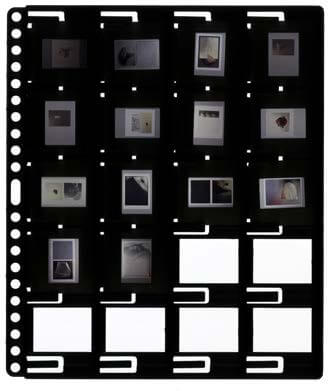 She showed such works in several major national and international print exhibits, and then, after 1982, the public record largely goes blank, save for a credit— ‘preparation of illustrations’—in a book on aneurysms. On the cover, dilated and weakened arteries are shown in silhouette, embossed in black onto the grid of red book cloth. It is imbued with her aesthetic when you know to look, whether she drew it or collated the illustration from elsewhere.

A mutual friend connects me with Aronyk, who is in the thralls of family wedding preparation, but generously offers up a few notes on her prints. It was her childhood in the tropics that led to a fascination with organic forms and found objects, such as seed pods and dried plants. Later, she began to make her own objects to avoid the limitations imposed by pre-existing forms, while hoping these found and invented forms would take on “a vitality and presence of their own.” Printmaking allowed for a combination of photographic imagery with the tactile, while the steps involved in the process sometimes led to unexpected surprises. The Japanese paper that carries most of her work was utilized for its semitransparency, creating a ‘partial view into a world’ enabled by printing on both sides of the paper. Indeed, looking at a few unmounted prints in person, the view of this world from the verso can be nearly as intriguing as it is through the frame.

Is there something to be gleaned from pairing the grids of Aronyk’s lithographs against the pierced screens of Cain’s drawings and etchings? Are his assemblages the interior lives of Couldwell’s empty office denizens? Do her photographically captured shadows of storefront plants and ergonomically dubious chairs call back to Aronyk’s printed jungle, light cast through gaps in the canopy? These are possibilities, but they are not my goal.

Author Joshua Cohen describes a certain genre of novel which might serve as “trials of historical consciousness,” where the understanding of the work relies on the reader’s engaged understanding of the world. To engage the works of private artists is often to be deprived of the release-valves of artist statements, biography, or the navigable arc of a continuous career, being left instead alone with the work and the world it inhabits. Cohen continues, “these are the books that provoke the reader, or at least provoke me as a reader, into seeking out the sources that are being denied, and in the process of that seeking I find myself situated within and vital to myriad continua.” This is what the works of Cain, Couldwell, and Aronyk provoke in me as a viewer, and why I look to them so often: for the endurance and depth of their mysteries, and the rewards of their engagement.

Cohen once more: “… this is how tradition works. This is what it means to live in a culture. Our books should be missing something, the finding of which makes us whole.”†

…and there’s no hole in my head— too bad.

The title and closing lines are borrowed from Malvina Reynolds’ song ‘No Hole in My Head’. All other quotations are from the author’s correspondence with the individual artists. Cady Noland’s exhibit THE CLIP-ON METHOD at Galerie Buchholz, New York, runs through September 11, 2021.