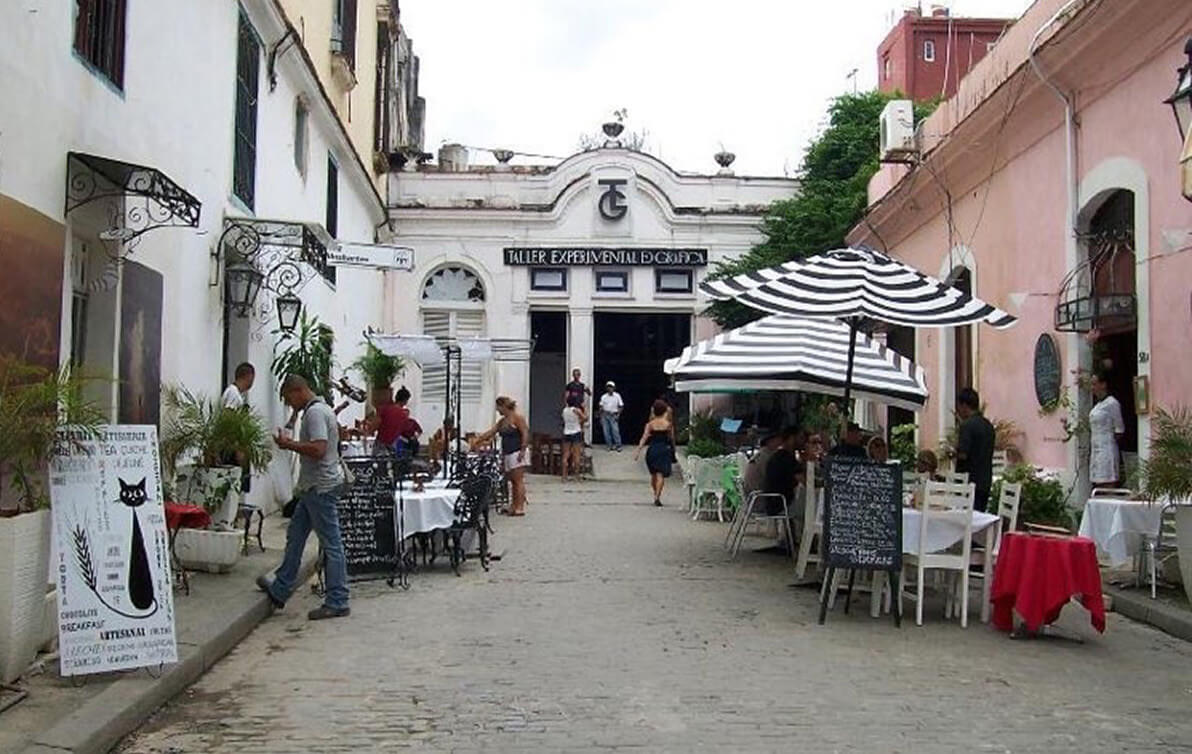 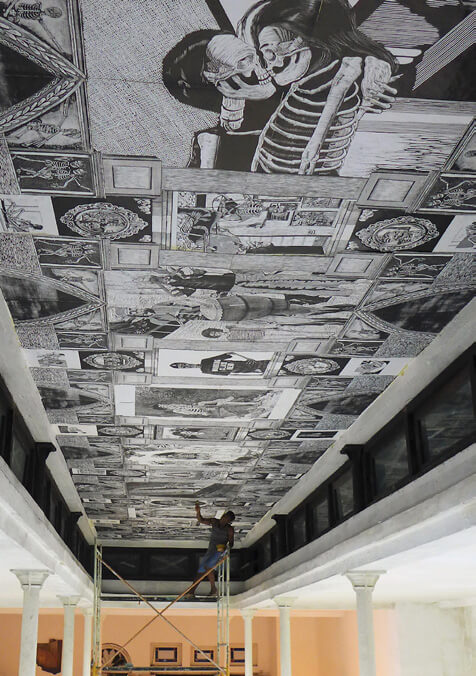 Taller Experimental de Gráfica de La Habana was created in 1962, three years after the Revolutionary government led by Fidel Castro came to power in Cuba on January 1, 1959. Its creation was part of a larger governmental strategy implemented with the objective of democratizing Cuban art, until then largely controlled by financial elites. This strategy included the immediate creation of art organizations such as Instituto Cubano del Arte e Industria Cinematográficos (ICAIC) for film, Casa de las Américas for music, and Ballet Nacional de Cuba, all of which were created by the new government within six months of achieving power.1 It took years, however, for the Cuban leadership to realize how instrumental printmaking was to their goal of democratizing art in the country, and actively support the creation of spaces like Taller Experimental.

When Taller Experimental opened its doors, there was only one art school in La Habana: Academia San Alejandro. Lithography was not taught at San Alejandro because, although there was a rich lithographic tradition in Cuba starting in the 19th century, it was almost completely dedicated to the commercialization of tobacco, and therefore, was not considered an artistic medium by orthodox academia. Until, in 1962, a group of Cuban artists2 appealed to Chilean poet Pablo Neruda3 to request of Cuban government leaders the preservation of large intaglio, woodcut, and lithographic printing presses that previously belonged to Compañía Litográfica de La Habana. Their goal was to create a community printshop to house the presses, and preserve Cuban printmaking traditions through education and experimentation not yet available at the only local art school.

Throughout the first half of the 20th century, Compañía Litográfica produced cigar bands (vitolas), and cigar box labels (habilitación) utilizing mostly lithographic techniques on limestones imported from Bavaria. Starting in the 1930s, however, this process was gradually abandoned in favor of metal plates, which were both cheaper, and less fragile, than the massive limestones. Consequently, both the presses and stones fell into disuse. By 1961, a number of the stones were used to create barricades in the streets of La Habana in preparation for U.S. invasions,4 and parts of the large printing presses were being used as agricultural equipment.5 This situation prompted Cuban artists to forward the petition that led to the creation of Taller Experimental. 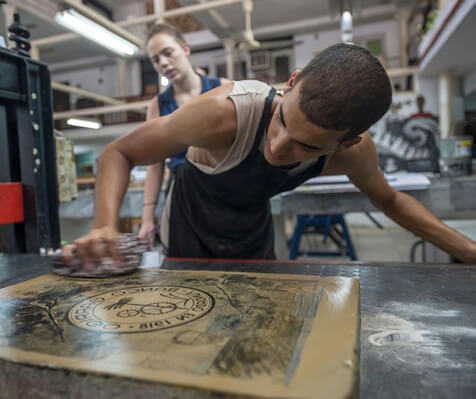 When Taller Experimental was officially inaugurated on July 30, 1962, the print shop had recovered a substantial collection of lithographic stones, one tórculo,6 three lithographic presses from the early 20th century, and one woodcutting machine from 1829, reportedly their oldest functioning press. For the next thirty years Taller Experimental would welcome students from a growing number of local art schools7 to learn printmaking techniques at the 18th century mansion facing Plaza de la Catedral where it was located until the 1990s. The technical capacity of Taller Experimental, its accessibility, and the willingness of its members to experiment made the print shop very popular, very quickly. Sandra Levinson, Director of the Center for Cuban Studies in New York, where an important collection of Cuban printmaking is held, noted in a 2012 interview that the majority of Cuban visual artists who trained during the Revolutionary period (1959–1990) developed a printmaking practice as a key part of their artistic learning process, many of them at Taller Experimental.8 Some of the most important Cuban artists who have produced at Taller Experimental include: Nelson Domínguez, Eduardo Roca (Choco), Umberto Peña, Ibrahim Miranda, Julio César Peña, Sandra Ramos, Manuel Mendive, and Roberto Diago. 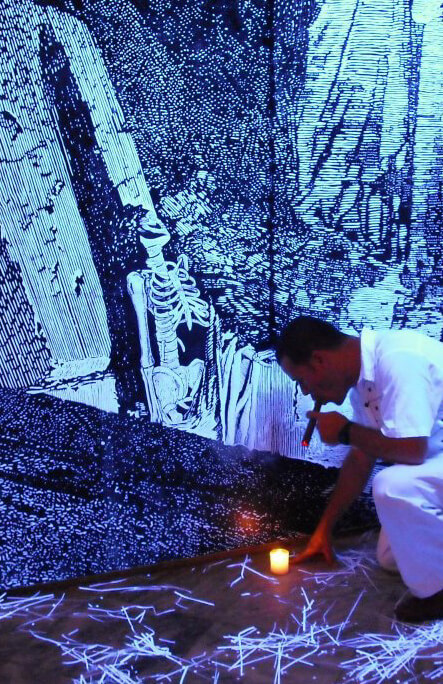 In the 1990s, Taller Experimental needed a larger space to accommodate a growing membership and a growing collection of print machines. So, it moved across Plaza de la Catedral to a large warehouse in Callejón del Chorro. The name of this narrow street is telling; it literally translates to “alley of the stream” because, although it is presently full of tourism-oriented businesses, in 1592 it was part of the first public ditch in the city.9 When Taller Experimental arrived to Callejón del Chorro, the ditch was gone, but tourists had not yet arrived. At the time, Cuba was experiencing a deep economic recession due to the collapse of the Soviet trading block, and facing an increasing number of U.S. government sanctions. The generalized, wartime scarcity also included art materials. As a result, collagraph became one of the most popular processes in the print shop.10 Utilizing found materials on a cardboard plate allowed artists to continue creating despite the crisis, and also conditioned the formal qualities of the work produced. Artists at Taller Experimental discovered, for instance, they could produce very large-scale works using matrices of scrap paper and cardboard. The inflated prices of metal plates in Cuba since the 1990s also informed the continued use of lithographic stones at Taller Experimental because they can be used repeatedly, as only the top layer is sanded down after an image is produced.

Despite relocations, political instability, and ongoing economic crisis, Taller Experimental has integrated deeply with the community. Although its membership structure has changed into a lengthy, peer-reviewed process, it is largely a recognition of outstanding achievement, as art students and the general public have open access to the print shop. Members of Taller Experimental regularly host workshops for printmakers of all ability levels, and collaborate with local organizations to develop and deliver cultural programming. In the last five years, they added a gallery and a small archive to the print shop, with funds raised by the community. Members agree, however, there is still much to do to ensure the appropriate conservation of printed works held in the collection of Taller Experimental. The location itself poses a challenge for needed capital renovations, as Callejón del Chorro is defined by ancient pipes, crumbling buildings, and extreme humidity. Against all odds, Taller Experimental continues to preserve traditional printmaking practices by teaching anyone who is willing to learn. Their goal is to maintain a profoundly democratic practice, driven by the understanding of art as a formative social force that prevailed in Cuba during the Revolutionary period.

3. Pablo Neruda won the Nobel Prize in Literature in 1971. He is considered one of the most important poets of the 20th century.