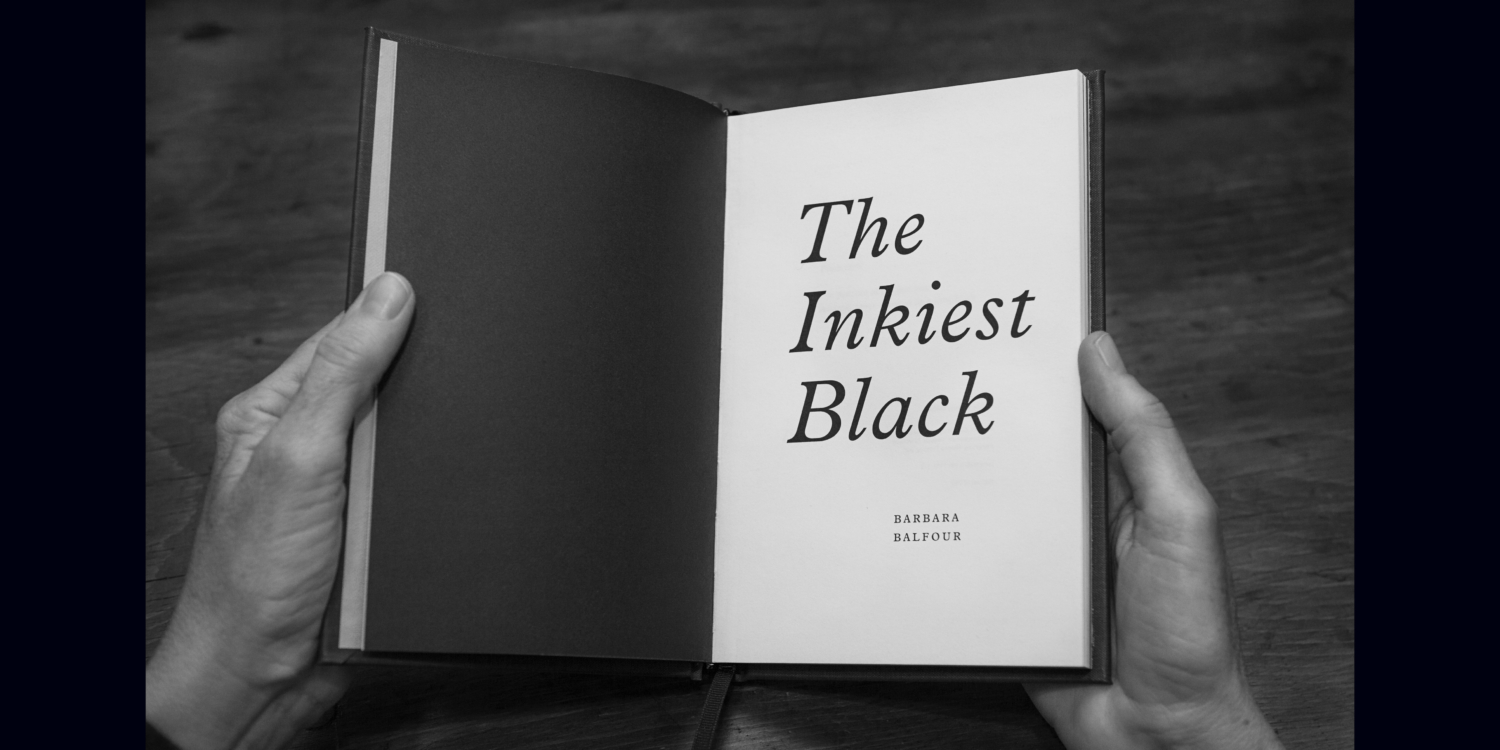 I want to believe the fiction, in fiction, that the author is speaking directly to you, the reader. Even if I know it not to be true, I’m often convinced that it is. 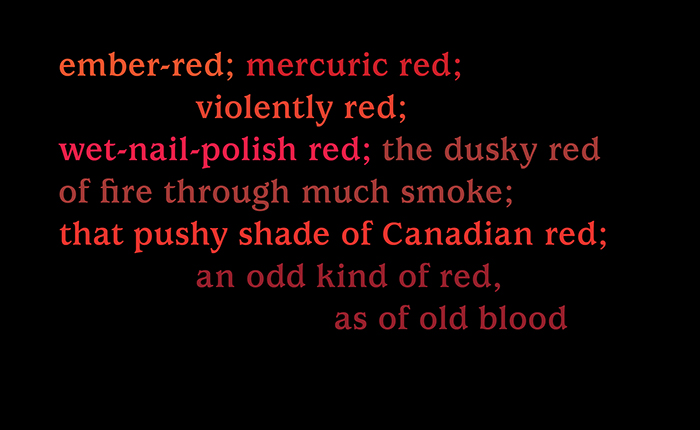 My experience of reading David Foster Wallace’s Infinite Jest was immersion punctuated by interruption. Certain words literally stopped me from reading further, with a frequency making it impossible to keep track of vocabulary. This lead to my compiling almost nine hundred words in Long List, the first section of my artist’s book The Inkiest Black. In the third section, White, Black, in the sequential order and relative placement in which they appear in IJ, I arranged DFW’s references to these two colours. Ranging from single, unadorned words to detailed and elaborately modified terms and phrases, they conclude with my personal favourite—“the inkiest black”. 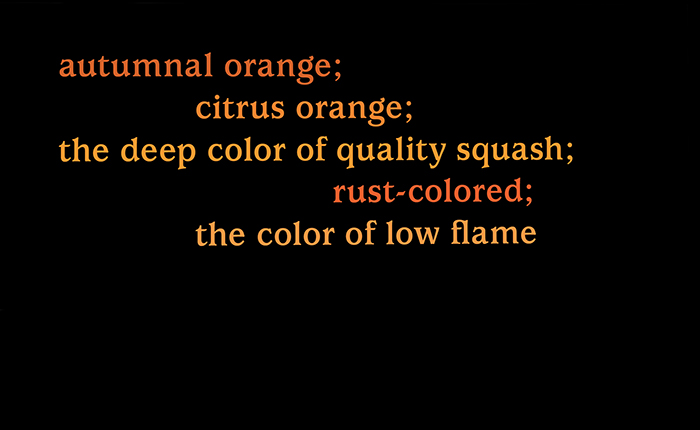 To believe the author is engaging in a mode of address, even when the author is dead, would mean one believes in a kind of spectral mediation, albeit a purely literary one. Although I certainly knew DFW was not contacting me, in a version of counter-apostrophe, it didn’t prevent me from replying. 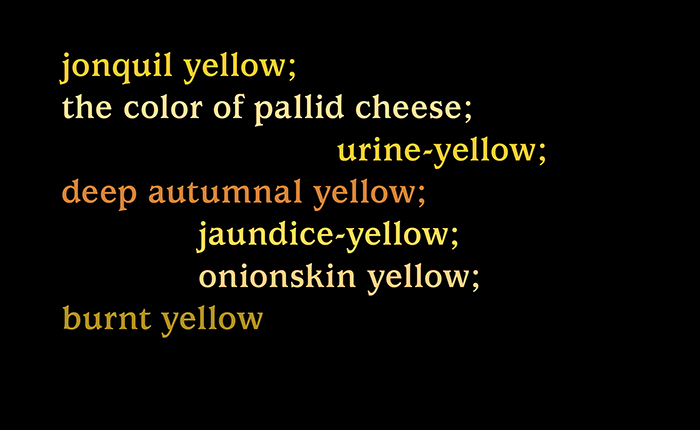 At some point in amassing the lexicon that became Long List, I noted a number of surprising and eloquent colour descriptions I couldn’t help but imagining. What would “obscene pink” or “burnt yellow” look like? Would I recognize “the white of long death”? Familiar with mixing printing ink, I decided to do just that with DFW’s idiosyncratic, ‘qualified’ colours. 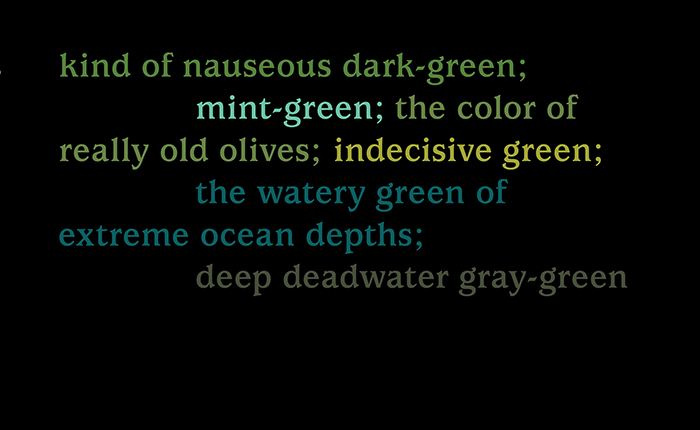 I made a working list of a subset of colour citations, subsequently subdivided into a loosely based spectrum. Departing slightly from the ROYGBIV sequence of red, orange, yellow, green, blue, indigo, and violet (relating best to the spectra of light), I formed groups corresponding to red, orange, yellow, green, blue, pink/purple, brown, grey, white, and black. Each set included six or seven variations on a given hue. 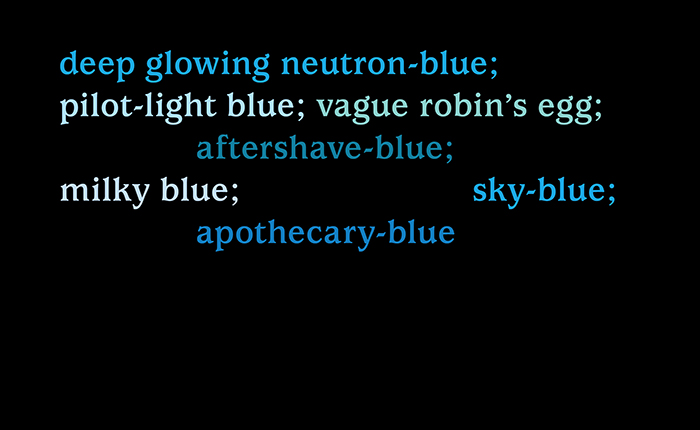 Although I had a notion in advance of some colours — “apothecary blue”, “the color of pallid cheese”, “the dusky red of fire through much smoke”, I took artistic license with others — “furious purple”, “creepy gray”, “the slightly sad color of early winter P.M.”. The challenge of “indecisive green” was in producing a green that would raise doubt as to its own greenness; it couldn’t be too self-assured or convincing. Caution had to be exercised to forestall a touch of red making a blue too purple, some yellow added to red causing it to veer toward orange and lose its very redness, a lightly tinted white swiftly becoming another colour altogether. For each colour mixed there were numerous inky iterations, necessary precursors to the one best approximating, to my mind, a DFW colour.

The practice of doing draw-downs, applying thin bands of printing ink onto paper with an ink knife, is well known to those working in print studios. A concentration of several grams of ink cannot convey how a single ink layer ultimately reveals itself when printed. Resembling commercial paint chips, draw-downs have a clear function: to indicate the full strength, level of transparency, and undertones of a given colour when applied to paper, ideally the one on which one intends to print. 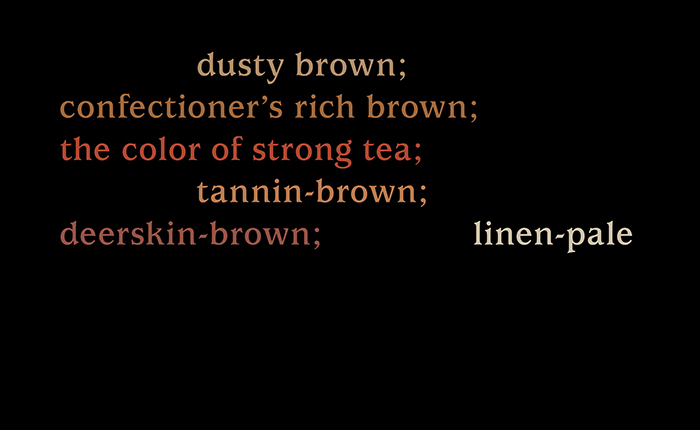 Draw-downs are one instance of myriad technical steps tacitly taken in a print project. As print-based artifacts, they have long fascinated me in being more beautiful than technically necessary. They retain a paradoxically ‘printerly’ character without actually being printed. Nonetheless, draw-downs tend to be summarily discarded once they’ve served their function. 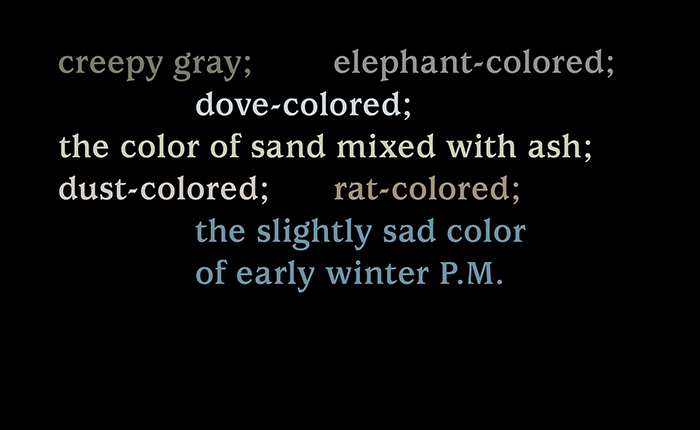 Tangible signs of the work to come, draw- downs are produced with a certain layer of an image to be printed in mind. When I began mixing the sixty-seven colours comprising Qualified Colours, others working alongside me in the print studio took note. The assumption was that I was undertaking a large printing project, although with more colours than one would tend to mix, especially within a related range of hues. I had to explain that this work was the work, an end in itself. 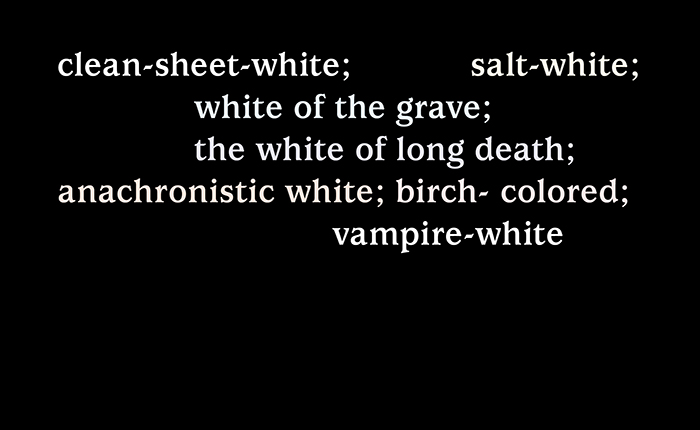 When the ten colour sets were exhibited, viewers felt comfortable assessing their veracity and accuracy, voicing opinions on the more speculative propositions. Discussion ensued in particular about blues and greens, commonly disputed hues in terms of one being taken for the other. In the end, my draw-down colour choices are undeniably subjective interpretations remaining open to debate, hopefully bearing some resemblance to the colours that were in the mind’s eye of David Foster Wallace, yet never entirely becoming a case of black and white. 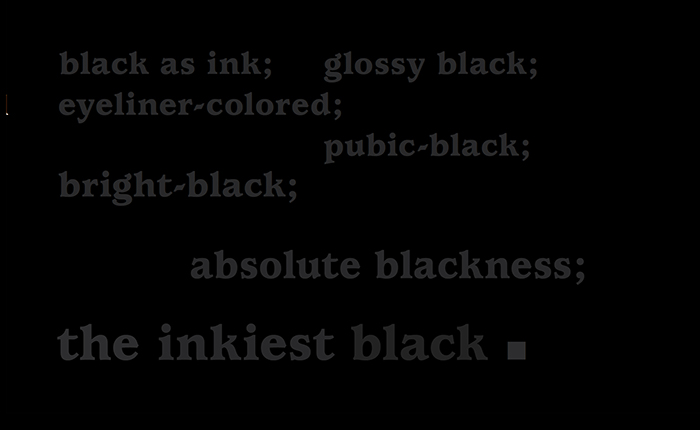 Barbara Balfour’s response to David Foster Wallace’s novel Infinite Jest takes the form of an artist’s book entitled The Inkiest Black. Comprised of three sections — Needs No Introduction, Long List, Qualified Colours, and White, Black — it pays particular attention to DFW’s vocabulary, his written descriptions of colours, and the various iterations of white and black in the novel, ending with Balfour’s favourite, “the inkiest black”. For those readers overwhelmed by the thought of a novel the length of Infinite Jest (1079 pages, including footnotes), The Inkiest Black is a more compact tome (140 pages) that nonetheless points you in its direction. 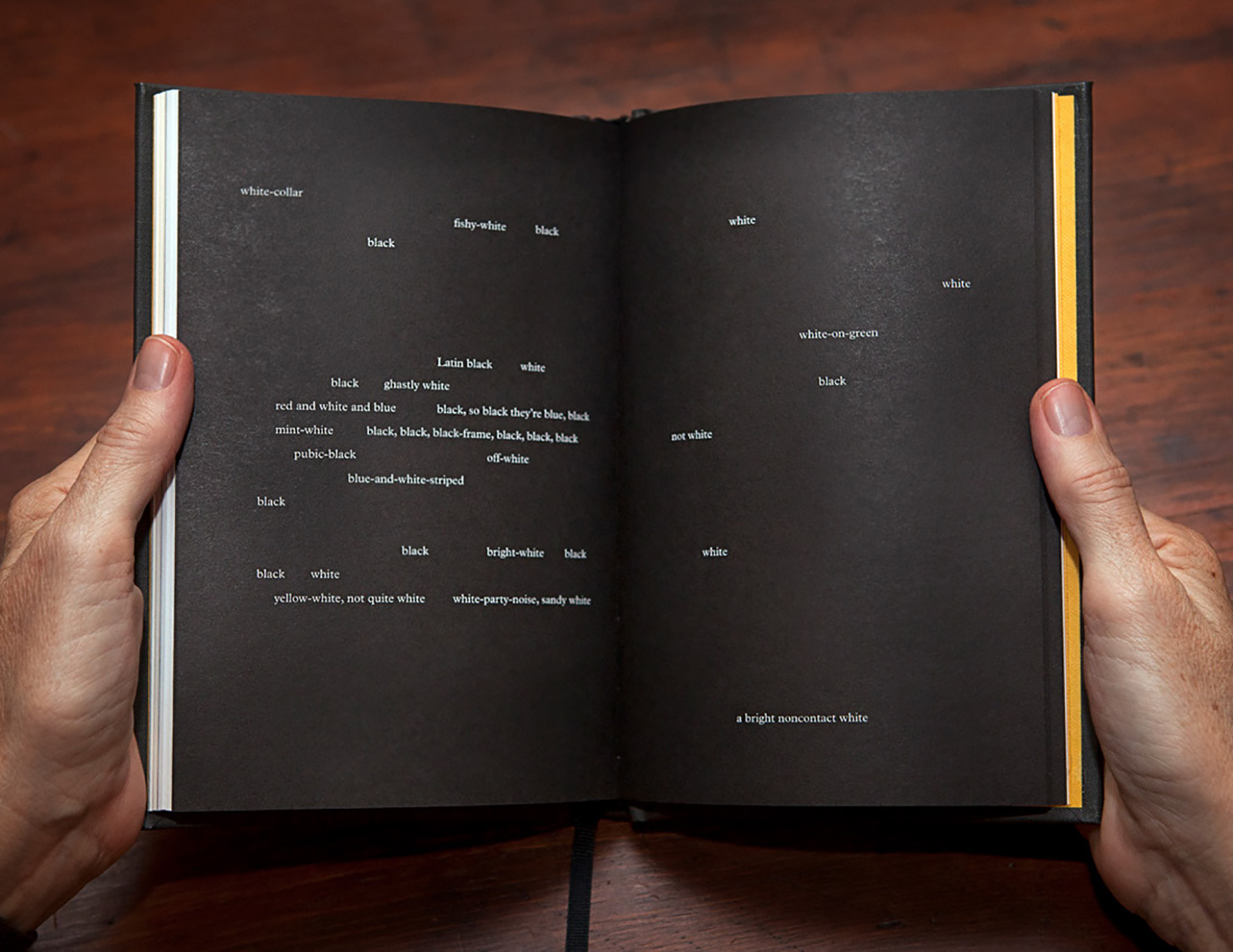 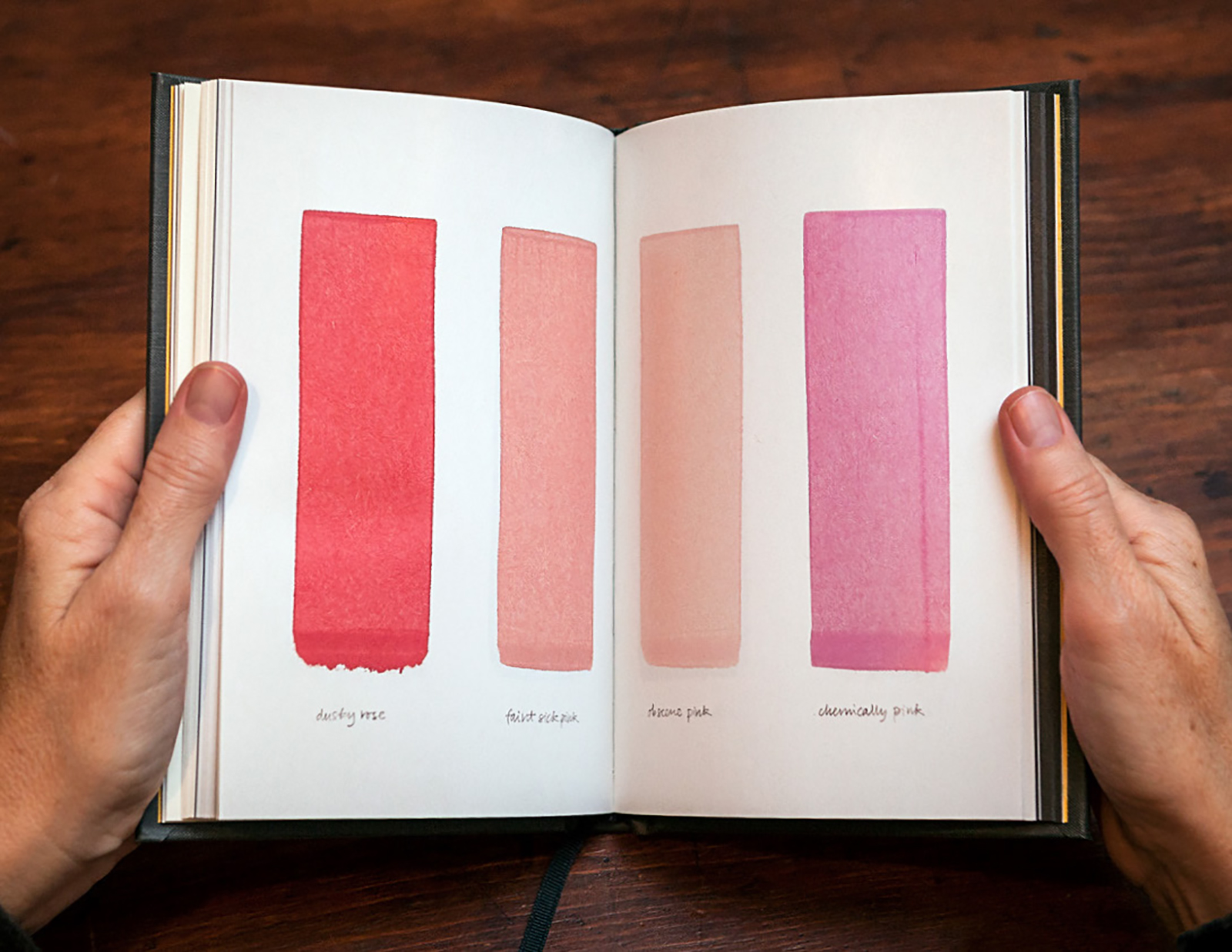 The Inkiest Black is available through Art Metropole in Toronto, ON; DNA in London, ON, and Printed Matter in New York City, NY, USA, along with selected venues in the UK. The artist may be contacted through her website at www.barbarabalfour.ca