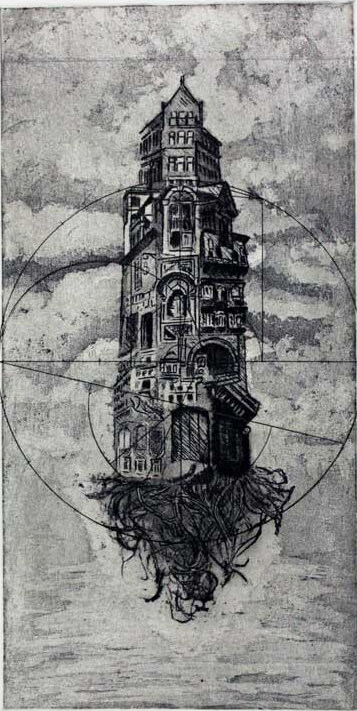 Contestants were asked to submit a story of 500 words or less, responding to Daniel Evan’s print Pauca Sed Matura and answering the question, “Where do we go from here?” Congratulations to Megan Klak for her winning story, “But Few Mature”, and to Max Cardilli for his runner-up, “Repeat After Me.” Two stories tied for third place: “Fortune” by Scott Hiller and “Centrifugal Trajectory” by Brad Fehr. Thank you to everyone who submitted stories this year, we enjoyed reading each entry!

We tore this house out of the earth and wrenched it into the sky, tore it out of the deep, wide, loaming earth, the black dirt encrusted on our hands, on our arms, painting our fingernails mud-colored. At first it didn’t want to come up, stubborn thing, we had to coax it, whispering to its roots in the darkness, muttering soft incantations and lies, stroking foundations and tickling doorjambs, until we became impatient, imploring, demanding obedience. And then we grew angry and pulled, pulled on the floorboards and banisters and windows, tugged at the quaking ceiling tiles and with howls hurled it into the sky, up and up and up and up.

We danced as the house shot upward, careening through its levels, running upstairs, downstairs, through walls, along ceilings, swinging from windows and tilting our heads up to glare at the clouds, taunting the sky.

The sky laughed with us, mad, drunk on the power of floating we grinned at each other, at the world and where do we go from here, where, where, spinning, cackling. The house shudders, passes through a cloud, water trapped in air, we stick our tongues out to lick it, to catch the cloud into ourselves and then we feel the house shake once, twice. And our bellies suddenly shoot up, crowding into our ribcages as we fall and fall and fall, through cloud and air and sky.

Where do we go from here?

They tell me to externalize it. Take the voices and give them flesh. Turn them into monsters. Separate. Repeat after me — you are not your thoughts. You are not your feelings. Hell, even your self-concept is self-constructed, so why not give it a shot?

So I point at random, giving them their official Monster Names™.

And hey, presto, there they are – just how I imagined! Well, maybe not exactly. Actually, the more I look at them, the less I like what I see. Godzilla shrinks into a shiny, frowning blobfish, flopping on the floor. Nosferatu becomes a chihuahua, shrilly barking, spooked by its own shadow. Dr. Lecter’s fate is unclear – all I can see of him is a hand beckoning from under the bed. I approach it slowly, lowering to my knees. This is it, I’m sure, my greatest creation. That is until I see that it’s only my Inner Child, looking at me with a tear-streaked face asking for my mother in a voice that’s nails-on-a-chalkboard meets hearing-your-own-voice-on-ananswering- machine. Useless.

“Turn them into monsters”, they said, “it’ll be good for you,” they said.

And what to do with them? The blobfish is suffocating, the chihuahua is nipping at my ankles, and my Inner Child has to go to the bathroom. They are following me around like ragtag goslings. Ugh. It can’t go on like this. My apartment isn’t big enough for the four of us.

Let’s take this outside.

I start building, grabbing whatever is at hand—the arches from my elementary school, the brick of grandma’s house, the chimney from Mary Poppins, wood from an abandoned treefort.

But, of course, they want more—the blobfish wants a swimming pool, the Inner Child is allergic to everything and the chihuahua won’t stop barking until it gets a mansion.

Fine, I say, throwing on windows and porches. The clock from Parliament Hill. The pillars of the White House. Whatever you please. Soon the thing is forty stories tall, tottering against a grey matter sky.

Of course not. As soon as they get in they are peering out the windows, snarling, crying, spraying me with water. Worse, now that they have a home-sweethome they are getting bigger, stronger. Dear God, the monsters are going to take over the asylum. Work fast. Slam the door shut, swallow the key.

Here’s my advice: take the house with both hands and pull. It won’t want to let go. Keep pulling anyways. The chimney might crumble, cracks will form in the foundation, wood will splinter. But don’t stop. The extraction isn’t complete until it emerges with the smell of fresh earth and childhood. Make sure to get it all—and don’t forget about the roots. Trust me. Otherwise it’ll just grow back.

Welcome to the town where even the dogs are waiting for the weekend. You know it yourself, a novelty to tell people that this is where you come from. The buildings are tall. They are not skyscrapers. Maybe some are. Small.

The light breaks over concrete edges near the sky, yes, and near the ground where it sails clear and clean through tree cover, chain link, car windows still beaded from night: cold inside, empty inside. The heat is building. It may be too much soon. It has all come too soon but hasn’t it always? He reaches forward and pauses because he doesn’t know what his fingers are touching. He reaches back.

A moment like a comet’s tail, he thinks, because all the fire is born from an invisible velocity, a speed preceding the rock but the trail tells you exactly how it got here. And all the flames point backwards. They implore one to see but the rock keeps flying forward. He reaches forward, he reaches back.

The town puffs out its chest. A national pride, say the people, the council, the mayor. The money is heard not seen. The town is small enough to duck the blame hurled its way. Too small to effect, the town protests with butterflied pockets. Voices rumble deep in its swollen bosom and they pound harder than a heart. Their fingers wreck those barbed ribs from within and poke out through button holes. The swell mutes their shouts however visible those hands become.

One reaches towards the problem, and pauses to assess. One reaches back. It’s not a fall but a reaching, backwards.

A bursting in the air and the berries hang rotten off the branch. No fresh berries can grow from a dead tree, least of all one that has grown from dead. Who is served by fruit upon a husk? His fingers begin to feel the sagging pulp beneath the skin and its the touching that brings it home. He has lost the sense to smell the decay. But there are buildings beside the tree and voices sing out from empty windows. “Don’t touch it. The buds are almost emerged. Come back. We’ll sell that harvest, you and we.”

His hand falls. His nose twitches. He should reach towards the height and grasp and shake the branches to brittle dust. His heart wants that. But there is no shelter from the climbing sun in that thin shade. The buildings are cool. He walks into that damned chill air. There are stairs for many feet. The bottom flights are worn to piles.

In a blue concrete shadow that tree is hidden, framed by towers one might mistake the two. But nothing so frail and filled with waste is long for life. It’s not a species but a stretch of bad root. However many feet lead slouching figures to the stairs, always there are hands reaching for the trunk. No one but many will tear it from the earth.

In the dim candlelight of the back room, Maxine gripped the arms of her chair as she watched the lady’s fingers settle on the final card. The three of swords and five of pentacles were already face up on the table.

She, of any one, certainly knew better than to be tense over some cards; after all, she was a PhD candidate writing her dissertation on the mathematics of business decision-making in the face of uncertainty. She developed probabilistic models to make sense of chance. And she knew very well the weaknesses built into the human operating system; the tempting logical traps or fallacies: “Appeal to Emotion”, or “Confirmation Bias”, anyone?

But Maxine couldn’t help herself feeling tense. The room was filled with the usual dollar store knickknacks passed off as exotica— candles, beads, stones— even a plastic skull with some not-so-spooky air-brushing. What would her peer reviewers say about her if they knew she had come to a fortune teller, and in a chintzy place like this? But the chaos of the last few months had worn her out, and upon seeing the “tarot readings” sign on the sidewalk, she had inexplicably walked in to the shop and promptly sat down.

“Ah, the Tower,…” the lady continued, drawing back her hand, “…not what I was expecting, dear. But no one expects the Tower, that’s the point—sudden, disruptive change is at hand, ready to destroy all.” She paused. “So, what is it that you have worked to build? And now, if in a blink it all falls apart, where will you go from here?”

Back outside, Maxine walked dazedly. A gentle rain had started to fall.

She’d always been fiercely logical and steady in her outlook. But in the last six months she’d been through it all: She’d been knocked to the pavement and nearly killed by a distracted driver, had her phone stolen, put down her cat, and, after getting her strength back and going for a hike in the mountains had –cliché– been struck by lightning. And now her dissertation defence was postponed again, with her supervisor taken ill. Oh, she knew not to fall for the “Gambler’s Fallacy”— there were no “runs” within independent, unrelated events. These were stochastic; pure randomness. As rational humans the best approach was always to step back and crunch the numbers, remind ourselves that in the long run a coin flip is always 50/50— that we could in fact know much about the uncertain future, if not the specifics. Misfortune was just life, understood best through the lens of chance, despite the convenient stories we wanted to spin to weave the disparate threads and sections into something that looked like it belonged together.

But she was broken. Her Tower was surely leaning, moments from collapse. She had built her cocoon of number-stories, but they hadn’t saved her from being beat down. She needed desperately to start weaving, to build a new foundation. It was time to tell a new story.