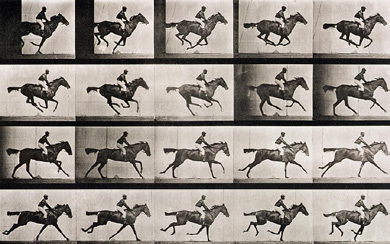 “He had captured aspects of motion whose speed had made them as invisible as the moons of Jupiter before the telescope, and he found a way to set them back in motion. It was as though he had grasped time itself, made it stand still, and then made it run again, over and over.” 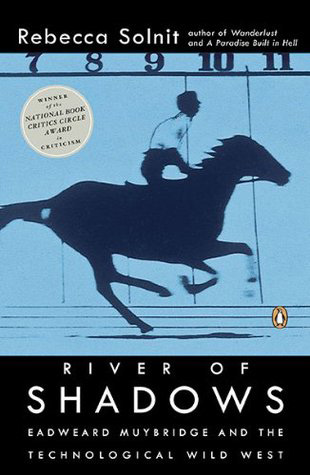 Rebecca Solnit captures the strange life of Eadward Muybridge in River of Shadows with a poetic and wide-ranging eye. As she explores Muybridge’s development of instantaneous photography in the nineteenth century, Solnit looks at the broader shifts in human perception during his life as cameras froze time with the click of a shutter and projectors reanimated motion for captivated audiences in the first flickers of cinema. As she writes, “He was the man who split the second, as dramatic and far-reaching an action as the splitting of the atom.”

Muybridge left England as a young man to sell books in New York and San Francisco during the 1850s. Passing through Texas, he was thrown from a stagecoach in a crash that damaged his brain and turned him towards an eccentric creativity. Following years of recovery and travel, he returned to San Francisco as a wet-plate photographer versed in the alchemy and technical restrictions of his profession. He took up a variety of commissions under the artist’s name of Helios, and had a portable darkroom in a carriage for business around town with the words HELIOS’S FLYING STUDIO painted on the side.

Driven to master landscape photography, Muybridge began exploring Yosemite. The artist took mammoth-plate photographs with glass plate negatives that reached twenty-by-twenty-four inches in size. Much of his work focused on natural phenomena such as clouds and water that shifted during his camera’s long exposures. Muybridge built a library of cloud photographs and improved his shutter speeds to depict more accurate skies. Water was too elusive to clearly photograph, and the white blur of waterfalls and rapids shows the minutes of time passing within each image.

Over the following decades, Muybridge created the technology to photograph each drop of water spilling from a jug and every detail of a horse stretched in full gallop. The way that a photograph stops motion seems natural to us, but for Muybridge it was a miracle that unveiled the blur of speed for human eyes. As Solnit writes, “He had captured aspects of motion whose speed had made them as invisible as the moons of Jupiter before the telescope, and he found a way to set them back in motion. It was as though he had grasped time itself, made it stand still, and then made it run again, over and over.” Photography had required immobile subjects, but Muybridge’s work began to capture processes and events in action.

To present the sequences of his motion studies, Muybridge invented the zoopraxiscope as an improvement on existing image projectors. Both a precursor to cinema and a nineteenth-century GIF machine, the zoopraxiscope showed dancers spinning, boxers throwing punches, and doves fluttering away. The photographer’s work packaged time and movement for consumption, pausing and diverting the forward motion of our lives. Solnit sees this apparent power over time as key to the appeal of instantaneous photography and cinema, as she writes, “‘Time lost or spent or not yet had’ was what people desired and fed upon in the films that became a collective dreamworld inhabited by multitudes. It all began with photographs of a horse in California.”