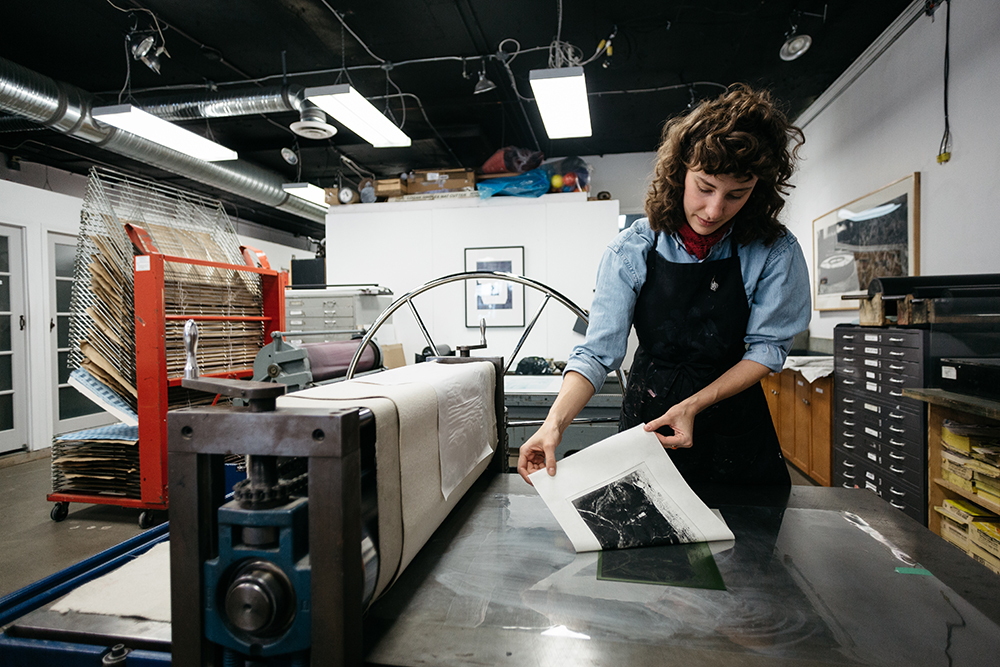 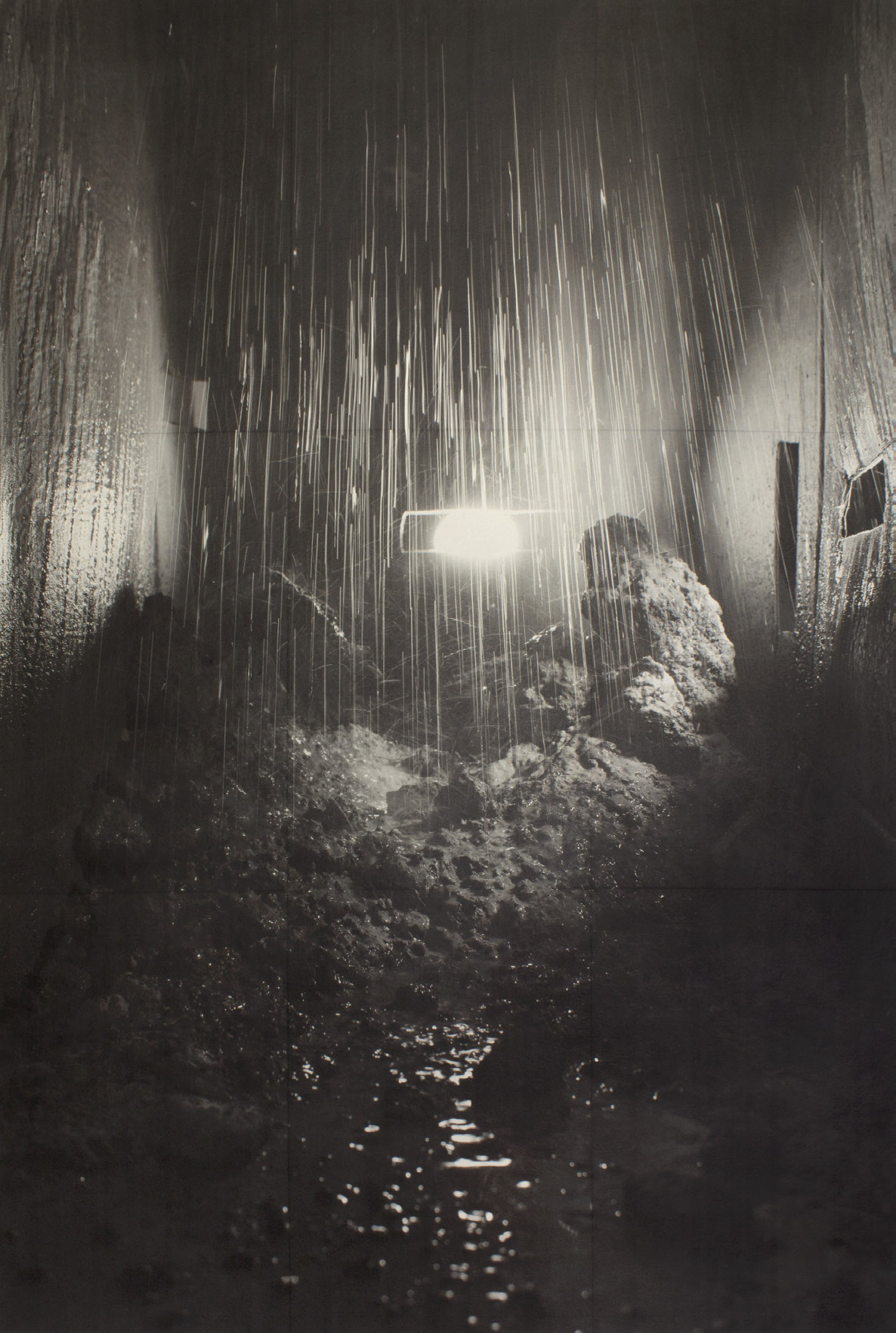 Whether Vermeer used a camera obscura when he painted is debatable, but, there is no doubt printmaker Angela Snieder makes innovative use of the camera obscura in her work. When I visited her SNAP studio, displayed on the wall and counter were the ‘guts’ of dioramas she usedin “Obscura”— an exhibition at the U of A’s FAB Gallery in early 2017. That show, part of her MFA Printmaking requirements, involved photography, printmaking, and an inventive cameraobscura. She literally turned the device upside down and inside out using a condenser lens from a photographic enlarger. Snieder made three camera obscura from 60.9 cm x 60.9 cm x 60.9 cm boxes and created a scene inside each box. What is particularly interesting is she lit the boxesfrom inside and put an aperture on the outside. As Snieder was exploring the original concept of the camera obscura, she was also playing with the viewer’s perception, the sculptural model in the box is upside down and projects right side up.

“It’s as if you are standing inside the camera.” Snieder used natural materials in the dioramas and modified their application to create scenes in the constraint of the boxes. She combined papier-maché with dirt, and hot-glued mud and sticks to surfaces. Snieder was thinking outside the box when she lit upon the idea for the dioramas. She began outdoors, but moved toward interior constructions, feeling the need for a more concrete methodology. “At first, I relied on spontaneity, walking around waiting for something to surprise me and usually it was scale, an ambiguous scale.” There is eerie quality to the scenes Snieder creates inside her camera obscura. “The dioramas are still life, but not. As if something had just happened, was happening, or had happened. It is evocative of the feeling of unease that I’m interested in.”

Her devotion to dioramas continues. “Obscura” will travel to Alberta Printmakers in Calgary January 11 – February 22, 2019 and to Winnipeg’s Martha Street Studio September 6 – October 18, 2019. During my visit to her studio, Snieder showed me sketches and proof prints of grass, and gampi paper replicas of grass. She plans to suspend the replicas in an interior scene and create a breeze inside, duplicating the movement of grass in the wind. “Their rhythms are unusual. They have an aura,” she says.

Not only is “Obscura” travelling to new Canadian environs, Snieder herself, along with fellow printmaker Morgan Wedderspoon, has accepted a month-long artist’s residency this July at St. Michael’s Printshop in St. John’s, Newfoundland. The duo’s plan for the residency includes creating an artist’s book using stone lithography and trace monotype, as well as some kind of textual element.

What do you listen to while you work?
I’ve been listening to José Gonzalez – very calming but also rhythmic, so it helps me get in the zone. Otherwise, I love listening to KEXP Sessions and NPR Tiny Desk Concerts.

What/who do you consider to be the greatest influence on your work?
Spending time outdoors. There’s a handful of memories I keep coming back to that usually involve affecting experiences of the natural world, that caught me off guard in some way and made me rethink what I know or how I know something. Another big influence is conversations with close friends – there’s nothing like a long chat with a kindred spirit. 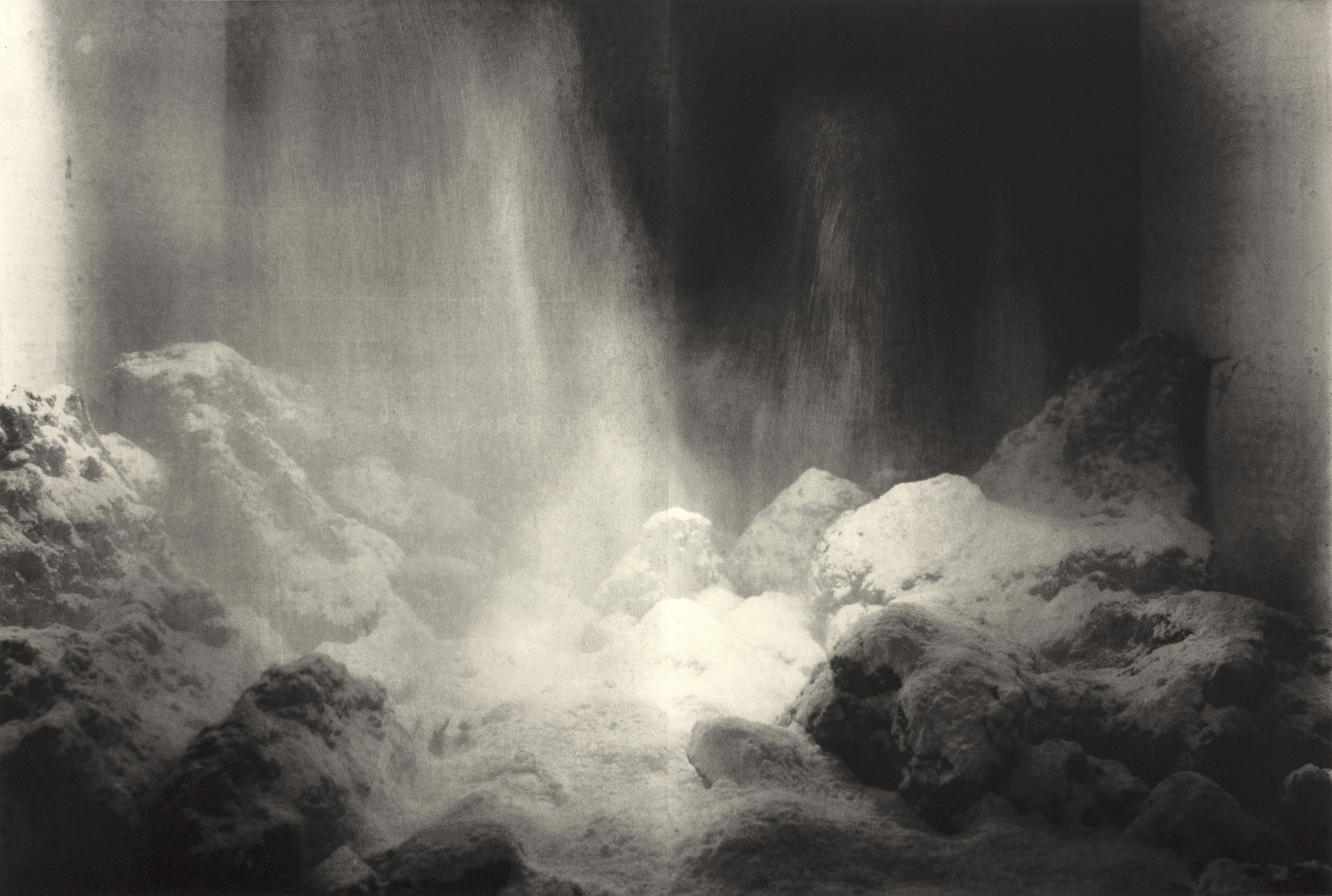 When did you begin printmaking and what attracted you to it?
I began in the first year of my undergrad. My first class was etching. I found the learning curve steep. Most of the process seemed up to chance, and involved observing and trying to predict what the marks would look like. Rather than drawing directly onto paper and responding to that instant feedback, the marks were always mediated by the process. Most types of printmaking involve some version of this mediation because of the use of a printing matrix and this means that surprise/chance always plays a role.

Do you have a permanent studio/workspace? How does it affect your art?
For the last year I’ve worked out of SNAP and shared a studio room with my friend and soon-to-be collaborator, Morgan Wedderspoon. I believe artists are stronger when they can share knowledge and resources and SNAP is a place where that happens.

How do the possibilities of the black and white photographic image inspire you?
A big part is the mystery. Eliminating colour can add a layer of ambiguity, because it can remove context that colour would provide (although colour can also function to generate ambiguity). I’ve always loved dark and black and white images, especially when the image is ambiguous in some way.

How does the idea of ‘truth’ (literal or figurative) affect your creative process and your work? (i.e., use of light and dark to create seemingly three-dimensional images, the malleability of perception in both photography and printmaking)
It’s an important rite-of-passage for many ways, never certain. Not only can this be a recognition of the dynamics of power at play in the inclusion or exclusion of certain stories in visual culture, but it can also open possibilities for playing with the idea of truth. This is particularly the case in photo-based methods, because of photography’s inherent truth-value and sense of authority. I can engage with mimetic qualities of photography that put you in a specific time and place, while undermining this authority (this assumed “truth”) through subtle or overt use of artifice or illusion.

How do the metaphors of the structures in nature (i.e.,caves, rock formations, flora) impact your work?
Although I’m intrigued by many natural structures, the forms/surfaces in nature that I most like to use are those that conceal their scale. Photographic images of materials like rocks, dirt, snow, or water provide textural familiarity or recognizability while also potentially being difficult to decipher. 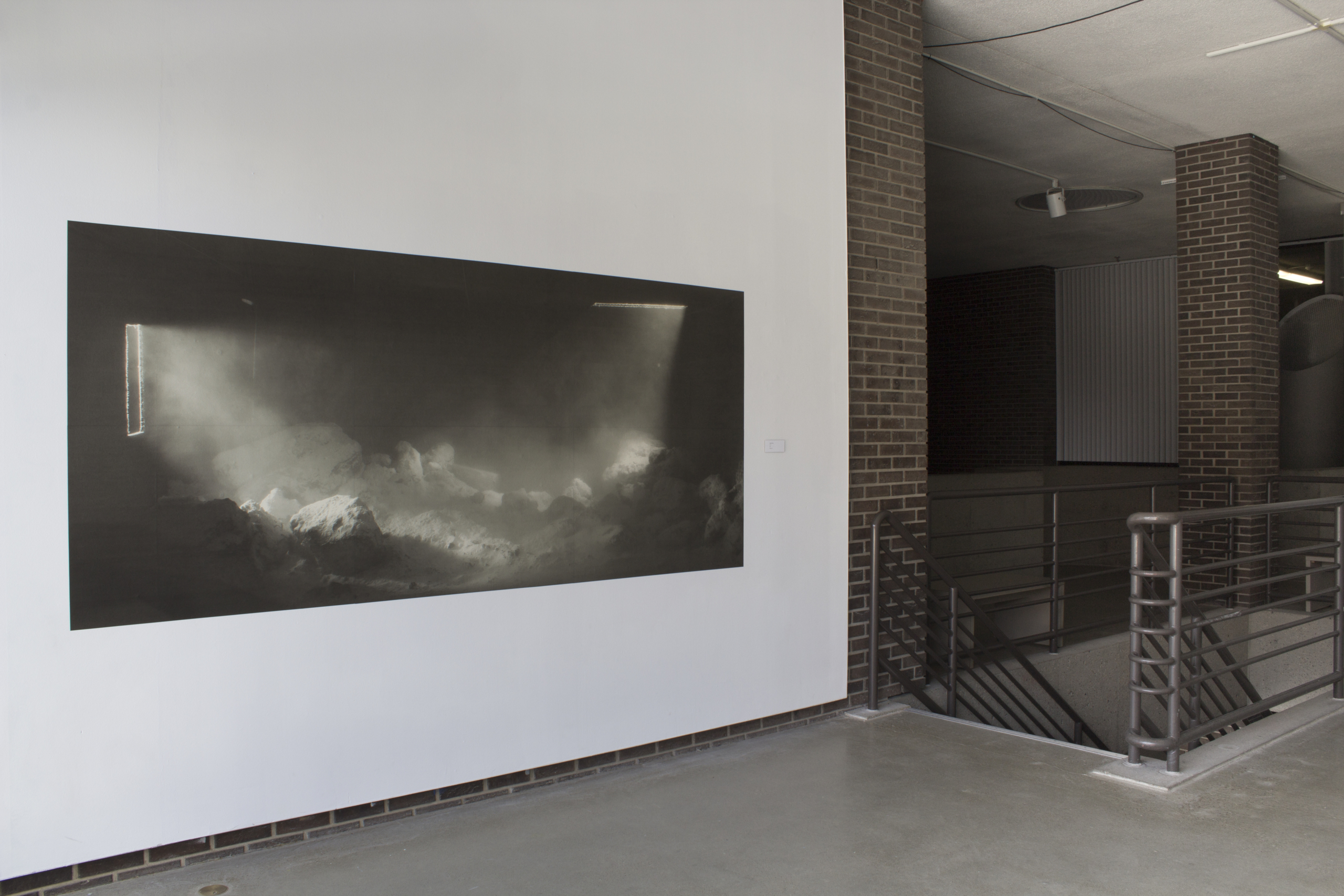 Are you a spelunker? What caves have you explored and where is your favourite location for spelunking?
One of my brothers and I went on a guided tour a few years ago of Horne Lake Caves on Vancouver Island and had the chance to crawl and repel through various chambers and tunnels within the cave system. At one point, the guide had everyone turn off their headlamps and we experienced what is called the ‘dark zone’ of the cave. This is the deepest and darkest part of the cave where no light can enter, where if you stayed long enough (or so we were told), your eyes would temporarily stop working. I think caves are so fascinating for many people both because of the fear factor of being in the dark and getting lost, but also because their structures are so unique. Caves don’t follow any of the spatial or architectural rules that we are used to, making them surprising and unpredictable.

How do you leave space for the potential random occurrence (and, ultimately, incorporation) of the natural world in your work?
In my most recent series, the prints were all made from various temporary dioramas I built in the studio. Making photographs within the scope of the built diorama meant I had self-imposed constraints to work within, which ended up creating circumstances for random occurrence and chance. The main variables I worked with were the structure of the space, lighting, and the perspective or cropping the photographs. A significant chance variable came from elements in motion – such as fog or water – which imitated natural rhythms of weather or atmosphere. These elements helped give the sense that the image was a moment within a time-based experience.

Can you describe your creative process?
My last exhibition involved building dioramas (often makeshift and always temporary) that I staged with light and atmosphere and then photographed. With the photographs I made photopolymer prints. Using a digital camera was important to make this work because of the feedback loop of taking the photo and reacting to it. Without something too specific in mind, I took photographs, altered the diorama, and took more photographs until something interesting and unexpected happened.