Looking Back (and Forward) in Suspended Time

Collage and words by Sydney Lancaster

This article was supposed to be straightforward: I would interview Robin Smith-Peck and Marc Siegner to chat about SNAP’s beginnings and what they felt was in store for this 38-year-old organization as it moved to a new home. A relatively simple proposition, in which I would sit down with people I know from the early days of SNAP and capture their ideas on the subject.

I did that, and then the world turned upside down about 48 hours later.

Just as SNAP entered a vital chapter of its existence, COVID-19 forced closures and cancellations and isolation right across the sector. The reception for the first two solo exhibitions in the new galleries—Residual Assets (skipped steps) by Andrea Pinheiro, and Horizon Line/ Base Line by James Boychuk-Hunter—was limited to 50 people, and contact information was requested of those attending, in case anyone became ill.

A strange time for crossing the threshold to…what next?

SNAP was born from both need and vision: the practical need for a place to create work after graduation; as a resource that offered continued feedback to foster that creation; and the vision required to build something that would provide reasons for people to stay in Edmonton.

Written on the back of photo: “As is well known — Marc and I resolved all our differences through peaceful and thoughtful consensus.” Robin Smith-Peck, mid-1980s.

Marc noted, “It was really that group dynamic that pushed and pulled us in more organic ways than not…We couldn’t afford to take the floor ourselves, we had to have other partners, and we found a number of painters in the community that were willing to also chip in, and help build, and help make studios—and their influence certainly was something.”

In short, SNAP began as a means to grow and foster community. As Robin explained, “We thought [SNAP could be] a response to…a kind of fractured animosity between media in Edmonton—which I certainly wasn’t familiar with—and we felt it’s not healthy to attempt to make art in communities where that becomes the mainstay of discussion…Our motivation was to create this community of people who were not standing on opposing lines because there shouldn’t be that kind of opposition.”

From the beginning, SNAP has been a hub for connection and communication, and inherently flexible in response to change. Both Marc and Robin were very quick to acknowledge the shared effort that heavily influenced SNAP’s history; as Marc noted of the early days, it “wasn’t just Robin and me—there were so many other people that have come and gone and contributed in huge ways.” And they were legion; the lists of names from those early years included: Sue Menzies, Janet Cardiff and George Bures Miller, Greg Swain, Anthony Pavlic, David Allen, Angus Wyatt, Marna Bunnell, Brian Noble, Trish MacEvoy, Pat Patching, Dana Schultz, Marlene MacCallum, Tina Cho, Phil Mann, Dick Der, Sandy Rechko, Bernd Hildebrand, Barbara Gitzel, Darci Mallon… and of course there were so many others in the decades that followed.

The agility of this longstanding community has allowed SNAP to evolve in many ways since 1982. Several changes in location and programming, additions to the printshop’s facilities, the development and refinement of the exhibition and educational programs, the expansion of the SNAPline newsletter into its present form … all this, the result of uncountable hours of hard work for staff and Board and volunteers.

Alongside these many moments of growth and change for SNAP, the shop also responded to, and incorporated, interest in both historical and future-facing practices. Classes in letterpress, linocut, woodblock, etching, and screen have their counterpoints in corresponding developments in computer software, hardware, and digital processes at SNAP, in particular the acquisition of the hardware and software for a full digital suite. The exhibition program has presented work from artists that combine not only print practices in combination, but also print in active relationship to installation, video, and sculpture—all of which have provided an expanded field within which SNAP actively engages with the city of its birth.

Quite to the point, Robin noted, “It’s a matter of the way we make images, rather than the tools we use. It’s not necessarily about something being more hand-based because you see it as a linocut, but I totally get that the use of the hand in the creation of the mark-making is something that people feel drawn back to, and I think that’s fabulous! I’m all for people engaging in those practices, as long as it doesn’t become this thing that printmakers have a tendency to do: they start doing this sort of ‘hierarchy of medium.’”

And now, with SNAP settling into Queen Mary Park, it is vital to consider the potential and possibilities for the future of this organization. Perhaps there is no better time to consider what comes next than in these odd and isolating times, when we all crave community. What life will look like post-pandemic is anybody’s guess at this point, but both individual artists and artist-led organizations will need considerable support of various kinds in the weeks and months to come.

Both Marc and Robin addressed the need to develop an expanded audience for art in general—and printmaking in particular. Developing an informed audience of collectors here would certainly benefit all artists, now more than ever. Robin notes, “[If] there is no informed audience, there never will be the necessary kind of investigative critical support required for a healthy community. Maybe that’s the future of printmaking: reintroducing a love-fascination-investigation of print as a language, and [of] print collecting as a really extraordinary opportunity to exchange ideas.”

Likewise, Marc sees an appreciative audience as a way to “support these artists in the community in a meaningful way. They have to be able to sell their work.” He also offered potential strategies: the expansion of the residency program to include custom printing projects that would employ local printmakers, and the exploration of sponsorships in the community that could bring print to a very broad audience. Worth noting perhaps, as we all face uncertainty on many levels. Just now, we don’t know what—exactly—will be needed. 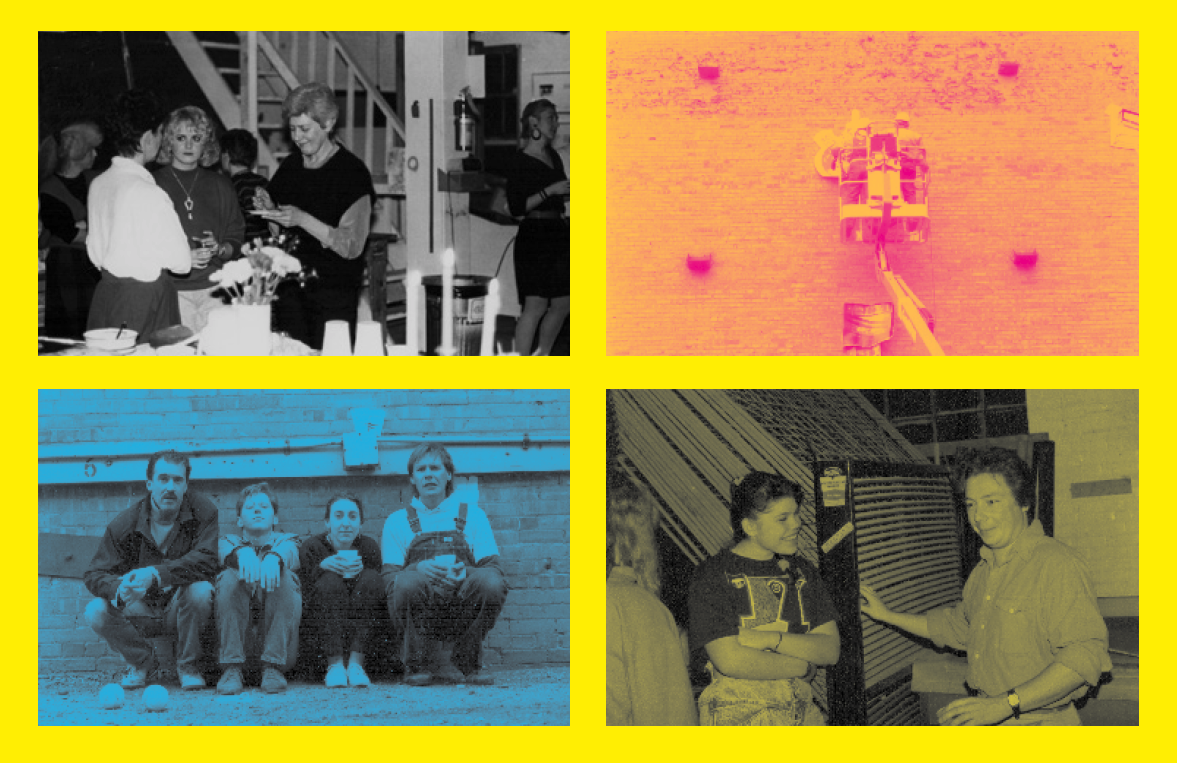 That state of not-knowing has made me think differently about what Robin and Marc discussed; for both of them, SNAP was and is a space meant for people, for community, for active engagement with printmaking. These words all but insist on in-person interactions; the reality of a communal printshop with a teaching and exhibition program insists on people in close proximity even more. These aspects of SNAP ultimately fly in the face of what we are currently experiencing. As complicated as that is currently, it’s also one of the greatest things to look forward to.

“Printmaking at SNAP has always been as much about working in a community as it has been about ink on paper…”
— April Dean, Executive Director, SNAP email newsletter, received 18 03 2020

At this point, we can only speculate upon what the ‘normal’ post-pandemic state of affairs will be. But even if the doors aren’t open right now, what SNAP offers to artists and the community at large remains deeply important. This is a community that is welcoming, encouraging, and supportive— and that cares passionately, isn’t afraid of hard work, and is willing to take risks. These strengths will allow SNAP to remain adaptable in the face of this rapidly-evolving reality, and will, no doubt, lead to new ways of connecting print artists to each other and to the broader community, the long history of print’s association with information in times of ‘plague’ notwithstanding.

I feel Robin and Marc should have the last words; what they each say below seems particularly apt.

Marc: “I’m a great believer in community, and I think if you tried to do that today you’d probably have people coming out of the woodwork that were keen, interested in wanting to make a go of it. There’s a lot of people out there too that maybe their ideas run counter to what you’re trying to do… raising questions that you didn’t want to hear, or bringing up things that maybe you thought were best not brought up, but I think you need some of that push and pull in order to examine fully what you’re trying to do.”

Robin: “[SNAP] should always be a place that meets the needs of the community— whatever those needs are. So if it turns out to be some kind of weird film animation kazoo party with puppets, then that’s what they need to become!

“I think it’s fabulous that they’ve survived —it’s a credit to all the hard work of all the people who have been involved. And it’s a credit to the community that continually allows it to become something else. It’s not an edifice, it’s not an institution—it’s an artist-run centre with some really cool expertise and equipment.”

I would like to thank Robin Smith-Peck & Marc Siegner for their time and thoughtful discussions, and SNAP for allowing me to access the organization’s archives for the images developed to accompany this article.

Featured Artist: JP King
Where do we go from here?