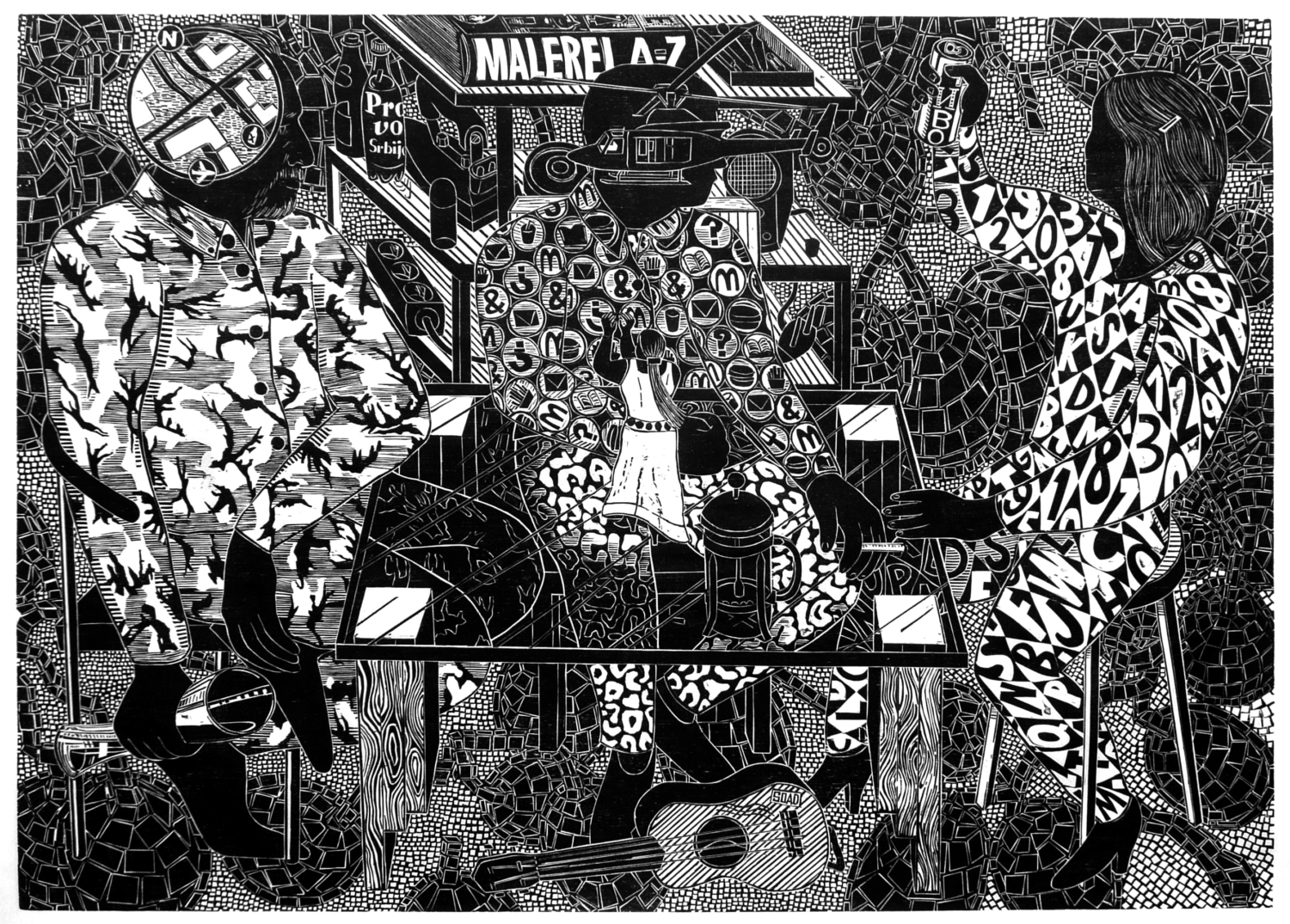 “The news say that the old Belgrade airport is being excavated,” reported the Austrian.

“Живели! I’ll drink to that,” toasted the Serb, taking another swig of her beer. “It’s been eight years since it was buried. That’s where I took off from before I came here, when I was seventeen,” she reminisced.

“Ya, I used to fly there too, in my younger days,” the Austrian nodded, stroking his beard. “Cargo planes, mostly, before the couriers switched to drones.”

At this, the American got excited and accidentally kicked the guitar lying at his feet. A burst of heavy metal roared from under the table for a few seconds. Ash floated from his cigarette while he struggled to reach down and shut it off. “I just got this new VR helicopter simulator, and it lets you fly wherever you want. And you can pick any model chopper you want, even the retro ones.”

The Serb was puzzled. “Why would you want to fly it by yourself? Why not just tell it where to go and let it take you? That sounds to me like wanting to clean your clothes by hand.”

“It’s not the same. You have way more control. You can go any way you want, not just in a straight line. You can go in zig zags, if you want.”

She was unconvinced. “I am happy to leave the flying to the machines. Aircraft accidents fell by 98% when commercial flights were fully automated. Besides, you cannot drink and fly, can you? Or smoke for that matter.”

The Austrian had an explanation, which he felt compelled to bestow on his younger companions: “It is because of – what do you call it? Heimweh. Nostalgie. People always look back to the past and think that it was better somehow.”

The Serb laughed. “This guy? Nostalgic? He’s not old enough for that. Look at him. He is a walking gallery of a dozen kinds of new technology!”

“Voulez-vous un peu plus de café, monsieur?”, asked the American’s miniature personal assistant and fashion accessory, as if to illustrate the point.

The assistant went back to cleaning up the ash from his cigarette and rearranging the pins and fobs on the American’s shirt, which blinked and vibrated with various notifications.

But the old ex-pilot insisted. “But look at his music box in the shape of a guitar. His drink dispenser made to look like a French press. Even the icons on his clothes are from another era. Who sends email anymore? Who still reads books?”

The Serb gestured at the thick volume on the shelf nearby. “Well, you certainly like to stare at your art book.”

“Ach, das ist wahr. It is my little oasis of colour in this black and white world of ours.”

The American came out of his reverie. “Why do you make it sound so awful? The new technology is where it’s at, isn’t it? And it’s why we’re still here. It keeps saving us from messing ourselves up.” He took a drag on his cig.

But the Serb took the old man’s side. “No, I understand. My mother used to keep one old keyboard around for writing her poetry. I used to ask why she didn’t dictate it, but she said it slowed her ideas down just enough to choose the right words.”

“Ya, I had artist friends who would carve blocks of wood – by hand – one for each colour in their picture, and print their images manually with a press. Even I thought they were a little crazy in hanging on to the old ways. I don’t think they were able to bring their presses here.”

Picking up her beer, the Serb toasted the air. “I’m just glad that someone had sense enough to bring some yeast up here with them!” Tipping the can and her chair, she finished off her beer.

“И сада? What happens next?”

This story was the winning entry to SNAP’s first Flash Fiction Contest inspired by Gabriela Jolowicz’s woodcut, PIVO (pictured above).
Read submissions by our 2nd, 3rd, and 4th runners-up here.

After Much Consideration, Tomorrow Has Not Been Cancelled
Gabriela Jolowicz