My research is focused on wilderness survival, and ecological change. Particularly temporary and propositional sites—such as camps— where humanity and architecture meet nature.

Jonathan Green is of Mi’kmaq and Inuit, British and Scottish heritage from Labrador City, Newfoundland and Labrador. He does not know a lot about his indigenous heritage but is trying to learn more. Green earned an MFA in Printmaking from the University of Alberta in 2016. He is currently an artist in residence at SNAP Printshop in Edmonton, AB.

Charlie Hailey’s 2008 book, Campsite: Architectures of Duration and Place expands metaphorically and literally on the Western conception of camping and campsites. For Hailey, the idea of making, breaking, and clearing a campsite can be useful for providing us with insight about the way we view the ‘wilderness’ as a liminal and separate ‘place’ in our collective conscious. The temporal and semi-permanent architectures of the campsite, or cabin, act as transitional sites—as spaces between the environment and culture. Camps create spaces that are permeable,
not just ‘inside’ or ‘outside’ spaces. 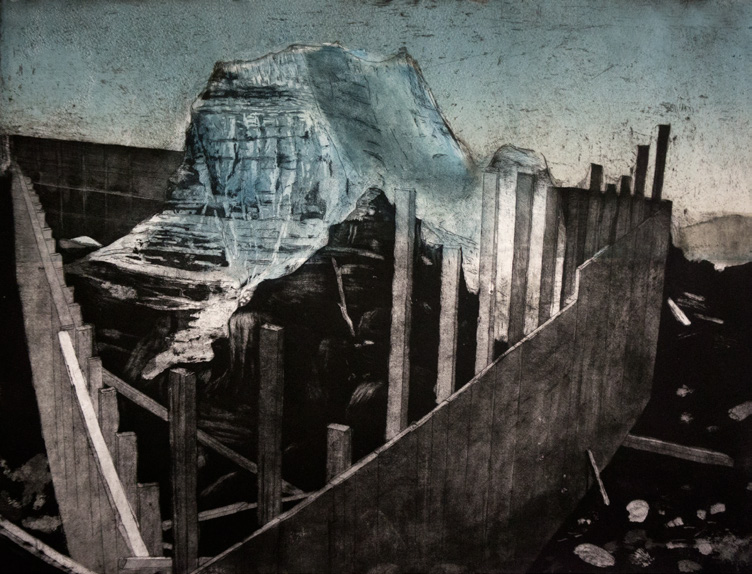 I combine my own documentation of the so-called ‘wilderness’ with appropriated images from survival books, and online images of wild landscapes, then merge them with pictures of cabins, construction sites, and modernist, experimental, ‘hippie’ architecture like domes. In these ‘camp’ spaces, our built human environments have the potential to work with or against the reality of nature. These campsites, and their accompanying landscapes, have become a “site of contest” between humanity and nature.

The image used for the cover of this issue is a detail from Jonathan Green’s Beta Series: Constructing an observatory. Intaglio 16″ x 18″, 2016.

isms: On Starting a Feminist Zine in Saskatoon
Authenticity in a Can