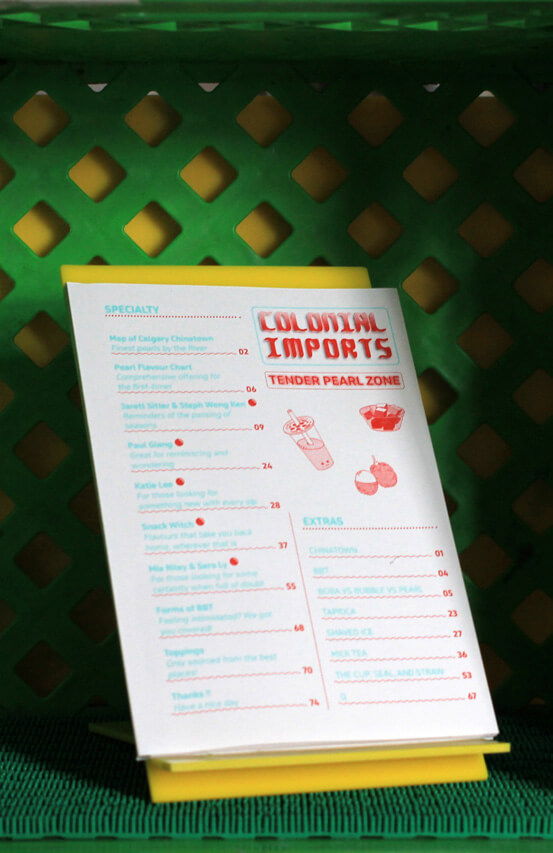 In the hot pandemic summer of 2020, a new risograph machine made its way from Japan across the Pacific Ocean to socalled Calgary. The purchase finally put artist Teresa Tam and writer Areum Kim’s duplicator dreams in motion. One year later, they are Alberta’s newest risograph publisher, Yolkless Press. ‘Riso’ means ‘ideal’ in Japanese, which couldn’t be a more apt descriptor for this new venture. The timing is perfect as neighbouring Edmonton risograph, Frankie Press, went on hiatus late last year. Yolkless Press is the risograph printer that we need right now. They are the perfect outlet for artists working through the pandemic’s resulting emotional baggage and the many critical cultural shifts of the past year. 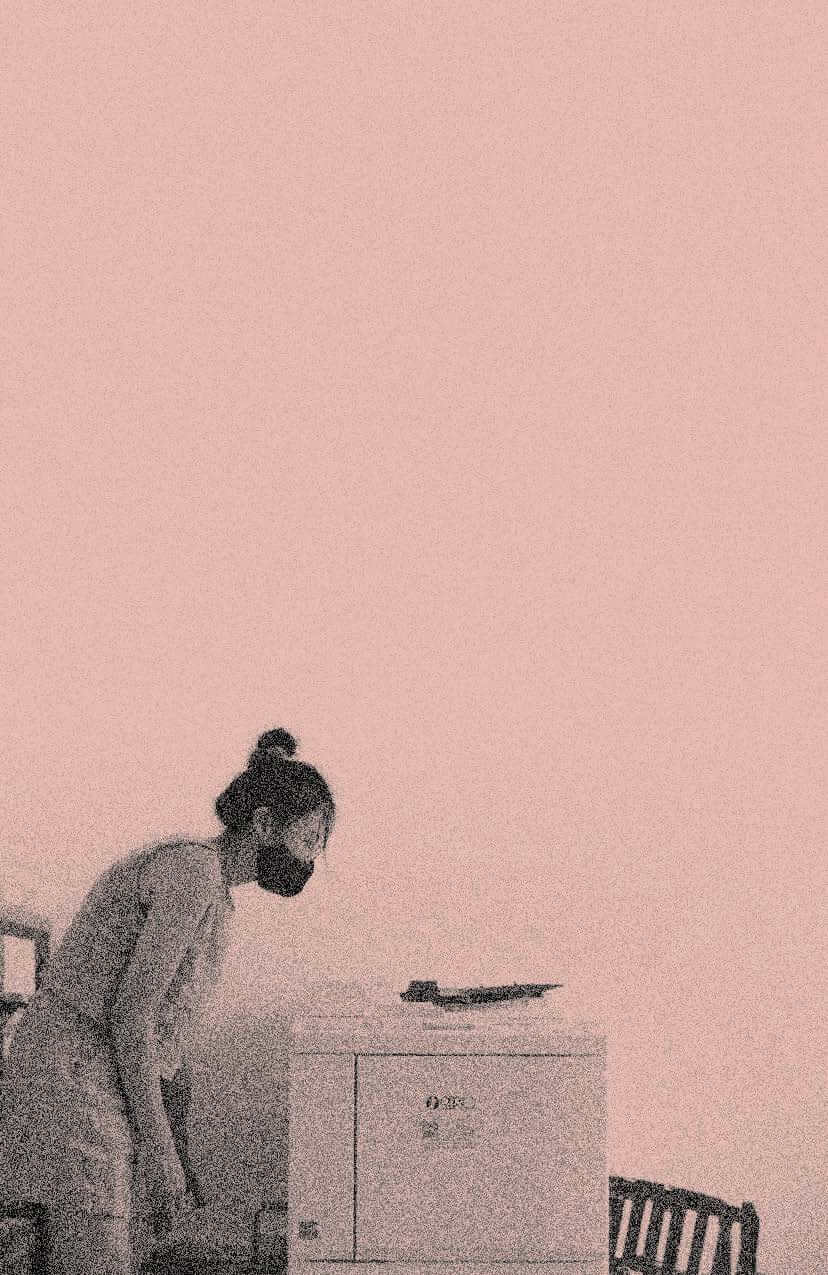 In 2019, the Yolkless Press duo worked on their first risograph book as part of Teresa’s exhibition “an ordinary hole-in-the-wall along macleod before the railway underpass” (AOHITWAMBTRU) at Stride Gallery. The publication was a compilation of artfully written traditional Asain recipes, artwork and stories by Areum and Teresa as well as Amy Lam, Cindy Mochizuki, and Ryan Tang. Through the project, Areum and Teresa found a shared passion for bookmaking and risograph printing. The vibrant colours and materiality of the process drew them in, and the potential for collaboration with others kept them dreaming of future opportunities.

The pair decided to embark on a trip to the Philippines in early 2020. The dream to start their own print shop was already brewing and became reinforced by DIY creative spaces they saw that were providing positive opportunities to people without access to arts funding. They saw risographs as the perfect tool to serve a community. While the initial start-up costs are high, Riso duplicators provide low-cost and brightly coloured reproducible prints. There is a good amount of artistry involved in the process, with many colour options and an intricate layering process akin to silkscreening. This is why risograph printing is a part of a longstanding and close-knit subculture of artists that extends across the world.

From an accessibility standpoint, risograph books shine as the perfect tool to help people translate their ideas into an easily circulated medium. Areum and Teresa envisioned that as a small but knowledgeable team, they could provide opportunities for those with little experience to work with them directly to design the work together. They liked that risograph machines are efficient at duplicating a large number of prints, which is why they are commonly used in schools or churches to print pamphlets and posters. From an artist’s perspective, the accessibility of the medium allows for creative ideas to become widely available. On the other hand, the materiality of a riso printed publication also made it a compelling choice. The two knew they wanted to craft beautiful objects with deliberate paper, ink, and binding options. The idea of large-run commercially printed works that typically show up as higher-brow artist publications and magazines did not fit right with the culture and community they could relate to: they were in all senses “too glossy”. 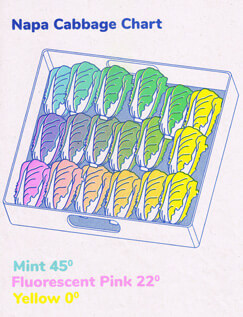 Wanting to become a part of the risopress community, and control their own means of production, Areum and Teresa decided to buy their own machine in the summer of 2020. During this time they started to explore their creative intentions for the project. Thinking back to their time in the Philippines, they began to consider what kind of community they wanted to serve. “When we initially dreamt up what this press could be, we knew that we wanted to serve BIPOC communities, where projects could be done with fewer barriers than institutions,” says Areum. “We’re interested in working with someone that would not necessarily fit within the institutional model and might have to jump through a lot of red tape”. They want to connect with people who aren’t necessarily artists or designers or even writers. Thinking of ways to reach their community, they began to imagine creating a review book that would center marginalized voices and counter the mainstream culture of food writing. With the concept for this project in mind, they first still had to get the press up and running.

Yolkless Press officially launched in November of 2020 with the release of a limited-edition tear-away calendar. Inspired by the traditional Chinese almanacs in our grandparent’s kitchens, their first sold-out success might lie in their unapologetically self-described “juicy” aesthetic. Using imagery from Asian food and household items, as well as popular fonts, their work speaks intimately to the collective Asian diasporic experience that they both grew up with. 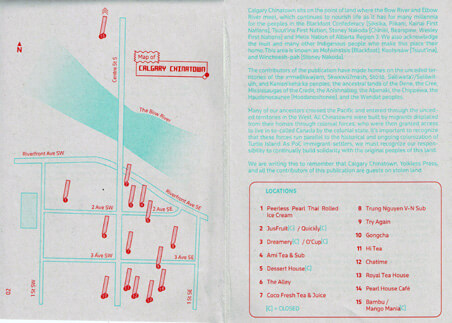 After hitting the ground running, Yolkless Press has a number of good things on the go. The review-book idea that began last summer has grown into an ongoing bi-annual publication. Colonial Imports delves into our colonial ties to food and explores how it is consumed, reviewed and developed. It includes a third editor, Stephanie Wong Ken, who is helping them to work with contributors from across the country. Tender Pearl Zone, their first volume, launched this past February and featured art and writing that centred on the theme of Chinatown and bubble tea. This issue simultaneously informs readers about the history and language around bubble tea culture, while gracefully giving space for contributors, mainly of East and South Asian backgrounds, to creatively share their stories. Their second volume, Indelible Recipes, is slated to be published in October of this year. It focuses on recipes as a form of inheritance, and readers can expect creative responses, such as the use of coding language, to explore the topic. Holding true to their vision, contributors will continue to include artists, writers and new-creatives whose work ventures outside traditional writing conventions. 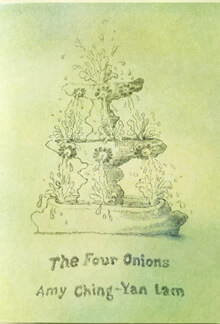 In June they published The Four Onions, a poetry chapbook by artist Amy Lam. When Amy first worked with the Yolkless team on the AOHITWAMBTRU publication, she mentioned her dreams of writing a manuscript. Serendipitously Yolkless Press’s launch and Amy’s manuscript came together this year around the same time, the stars aligning just in time to release the first chapter as a beautifully crafted book. One reason for Amy’s choice to print with them is that they are based in Calgary, the city where she grew up. A lot of the writing in the chapbook reflects on food and her family life during her childhood. For many artists, finding a printer that can understand their experience is important, even as it relates to place.

Alongside publications, Yolkless Press has been offering risograph workshops that aim to teach people how to create images and text digitally that work well within the riso aesthetic and printing process. They have a beautifully printed risograph user guide book that gives newcreatives the confidence to develop a piece that will work with Yolkless’ colour, paper, and binding options. They understand that creating a culture around the medium is important for the sustainability of the press and are empowering people to work collaboratively with them.

The team at Yolkless Press has learned a lot already, especially what it means to run a community-centred business. Paying people fairly, offering affordable costs and focusing on sustainability are all part of their mission. They see this as a slight deviation from the artist-run centre and institutional model, which often becomes paralyzed by scarcity funding. After creatively sourcing money to pay artists fairly for their first few projects, Yolkless’s goal is to generate revenue sustainably through the sales of their publications. In terms of covering startup costs, Areum likens the purchase of the risograph to buying a car, where the initial investment may not hold much value. Their priority is community-based work, with the understanding that BIPOC communities have had less access to publishing and printing resources due to the prohibitive cost of larger commercial-focused options. The service they provide to the arts scene and the ability to cover operational costs is enough for them to want to keep the project going. It is more important to them right now to give opportunities to individuals to share their creative ideas and pay them fairly for their labour.

Yolkless continues to be surprised at how people are finding them, but the fact is that the community has been asking for a local riso print shop for years. Their final dream is to one day have an affordable, great-looking storefront space. Rather than acting as an agent for gentrification, they are envisioning a space that is an extension of the community where folks can use it as a library, shop, workspace, and venue. With a longer-term vision in mind for Yolkless Press, there are so many possibilities of how it will grow and shift. For now, they want to let people know “we’re here, so let’s do it!” and encourage people who have been thinking about a project to consider them as a good option to turn their publication ideas into reality!

Message from the Board
When to Stand and When to Run…