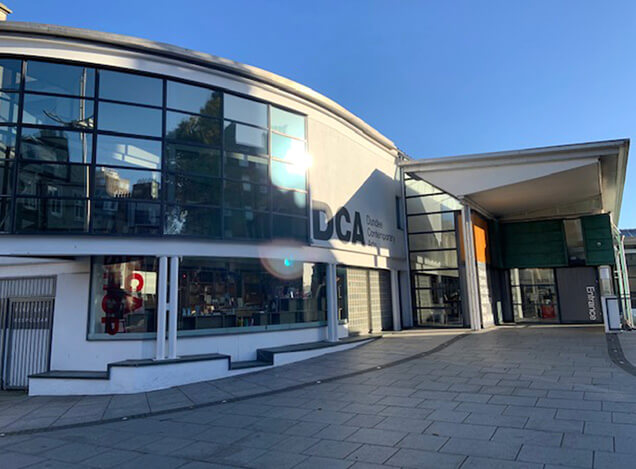 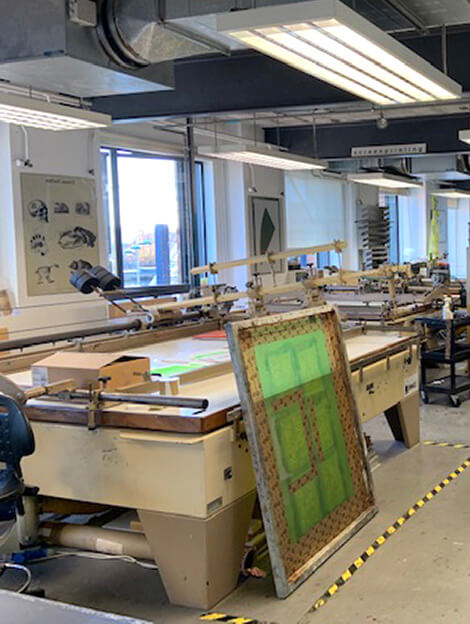 Dundee Contemporary Arts Centre (DCA) is not only a print workshop, it is a hub for creativity and culture in Dundee—a contemporary art gallery, independent cinema, learning department, restaurant, shop and, until recently, the Visual Research Centre for DJCAD (the University of Dundee’s art school). When I was a student, the DCA’s dramatically curved white building was the place to go for cutting-edge art, cocktails, and affordable movies. After I graduated, joining the Print Studio allowed me to keep making work. The studio was a lifeline to sanity in the post-graduation vacuum, offering a community of creative people ready to support each other. Scott Hudson has worked at the DCA Print Studio since 2001, and was a co-founder of Dundee Print Collective. I asked him about the DCA, what it does, and where it came from. As with most conversations these days, ours started off with Covid-19.

How have Covid-19 restrictions affected the DCA?

We opened on the 4th of September and prior to that I worked most of lockdown from home. So far we’ve been on restricted hours. We’ve had a strong cohort of about 15 people who’ve been in every week, but obviously we’re not near pre-Covid numbers. And we’re not doing any courses at the moment, just because the rules with social distancing keep on changing. That’s loads of lost income, but also new people coming to the studio. Like if they’d done a class and then maybe joined as a member and come in, there’s always a trickle of folk joining up. A lot of the ones who have come back in have really missed it; it’s a reason for jumping on the bus to go into town. I think the challenge now for DCA and many other organisations is to make sure you can get people back in and new people in when we get out of this.

What is DCA’s history?

DCA was 20 years old last year. It opened up in 1999. It’s an award winning Richard Murphy building but there’s elements of the older building incorporated into it. It was derelict for years and it was an unofficial skate park—behind the white walls in the gallery there’s still graffiti. But in its very first guise it was a hospital for infectious diseases. We’re talking 1700s.

Prior to the DCA, the print studio and the cinema used to exist in two separate locations in the city. The idea was to consolidate them into a cultural hub, but there’s been an open access print studio in Dundee since the 1960s. DCA has kept the traditional etching, relief, screenprinting, lithography, and photography, but also we’ve been leaders in introducing new technology to the print studio. We were the first in Scotland, maybe even the UK, to get a digital laser cutter, digital router, digital vinyl cutter, basic 3D printing. That changed the print studio quite a lot because you open it up to a wider audience. So we were getting designers and makers coming in.

DCA recently started offering Risography, can you tell me about that?

The best way to describe the machines, they are oil-based screenprinting photocopiers. You put in a black and white image. Maybe it’s got tonal values, the Riso machine picks all of that up in one stencil. You press the button, and inside it makes a stencil like a screenprint, on a roll of banana paper, and it wraps it around the barrel of the ink, and the stencil gets ink pushed through it and then your paper’s run through and you can print off hundreds. You print one colour at a time. When people are buying second-hand Riso machines you might have two or three colours and that’s all you’ve got. We’ve got two machines over a couple of years, the same model, and we’ve got a few inks with each one, so we’ve got about ten colours now.

What’s really good about Riso is it’s got its own little counter-culture. Since we got it into the studio it gives us more insight into what’s going on, what people are working on and what people want to do: cheaper, quicker, more colourful, brighter—posters and zines and artist books. It’s really good for workshops. My colleague Katie at the print studio does lots of Zine and Riso workshops, because it’s not particularly complicated to use. It might be a bit of a lifesaver for us to get new folk in.

Tell me about collaborating with artists who are exhibiting at DCA? 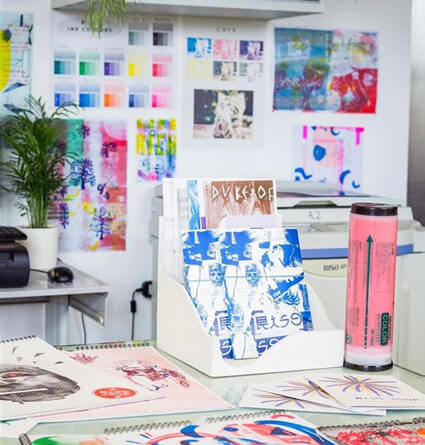 More often than not you’d be working with artists who’ve never worked in print at all. Often they’ve come to visit DCA and a conversation might start there about making a print, or something specifically for the exhibition, or a co-edition. Martin Boyce was the main artist for the Scottish pavillion in the 2009 Venice Biennale; a lot of people from DCA went out to Venice to work on the project there and the show returned to DCA, so we did a number of different types of edition for that exhibition. At the moment we’re going to be editioning with a selection of artists, about 10 or 12, who’ve all worked with the DCA before. Toby Paterson, Martin Boyce, more recent artists like Patrick Staff, who’s based in the States. DCA has approached them and asked if they’d like to support DCA by making an affordable edition. We’ve worked with David Shrigley, Will Mclean, Clare Barcley, Ilana Halperin, Lucy Scaer. So my working week might be as diverse as chopping up rags, cleaning work surfaces, prepping for a class, working with some school kids and then working with a high profile artist. If you get your teeth into a good editioning project it makes you a better printmaker because people will ask you to do something and you’re like, hang on, can we do that? Well let’s have a shot. Test the barriers a little bit.

The Victoria & Albert Design Museum recently opened in Dundee; how has that boosted creative culture?

DCA is one component in the story of the V&A coming to Dundee. It wouldn’t have happened if DCA didn’t exist. Dundee is a university city; you’ve got DCA, DJCAD, the University of Abertay, the games industry, the comics, all these things for a small place, so it’s like why shouldn’t a big design museum work outside central Scotland? DCA’s footfall went through the roof, people visiting our gallery, even dropin visitors to the print studio, because they’ve gone to the V&A and then come up into town. From down south, or another part of Scotland, or France, Europe, further afield, loads of visitors. There’s talk now the Eden Project is supposed to be coming to Dundee, big domes with different natural habitats inside like an indoor living museum. And then the old factory that used to print the Beano comics, the hardback annuals for DC Thompson, that’s been earmarked to be refurbished as a working hub for designers and artists. There’ll be affordable studio space, exhibiting space, workshop space. I really hope it does happen because it’ll benefit the creative sector massively in Dundee.

I moved home this summer after living in Canada for 5 years. I count on the DCA and places like it to help me find my feet again in the Scottish art scene post-Covid, as they helped me find my feet in Canada. Across the world, the arts are feeling the pinch of the pandemic, but it gives me renewed energy and optimism to hear from Scott how actively the DCA is still working to bring creativity to the lives of artists and non-artists alike. By adapting as they have always done to changing opportunities, technologies and audiences, places like the DCA will carry on enriching our lives and enabling our creativity through the times ahead. For now, as Scotland inches into tighter restrictions, I sit tight. But I look forward to visiting Dundee and the friendly, productive familiarity of the DCA Print Studio soon, and trying out their Riso machines.