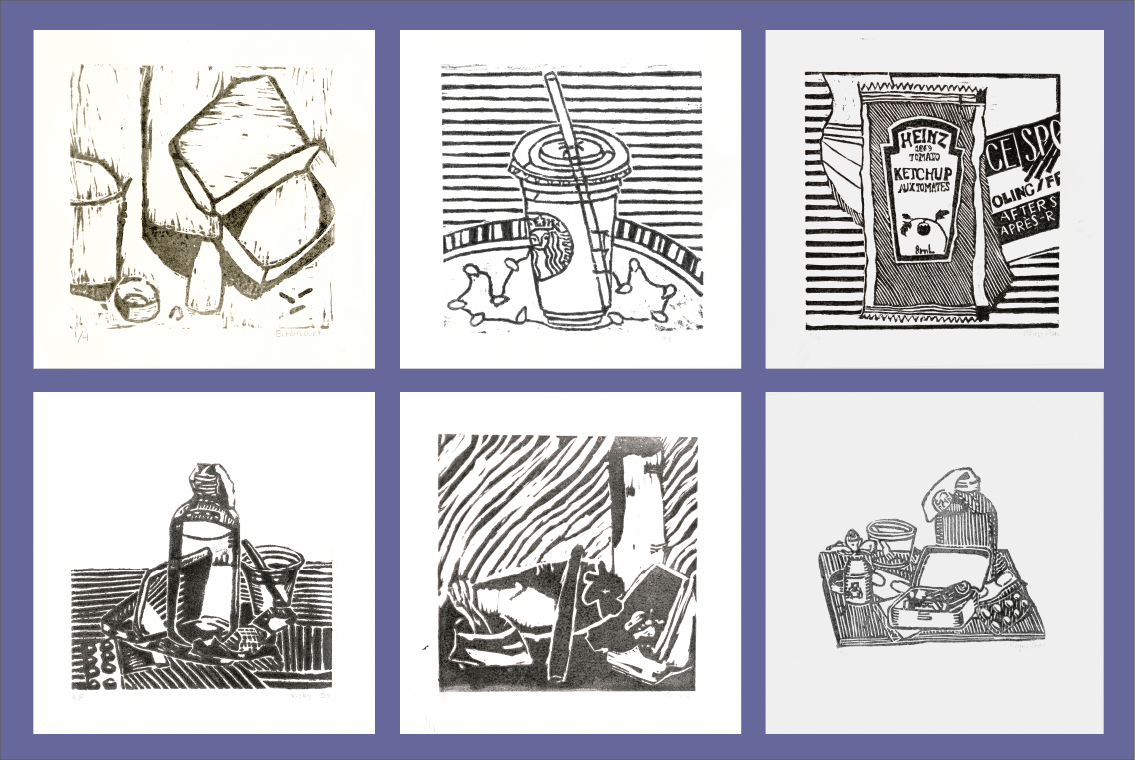 The genre of still life imagery is one that makes the commonplace objects that surround our everyday lives immortally captured in an image.

In the past still life was closely linked with concepts of memento mori, inevitable death, and fleeting beauty. Unlike any other time period in history we are surrounded by stuff that is quickly thrown away and it has a fleeting beauty. But what happens to all the things that one day is so precious and the next day is thrown away without a second thought? Do our objects of fleeting beauty deGrade as fruit and insects do? Or are our disposable objects going to haunt us as they pollute our world? In this series a grade 8 class at Langley Fine Arts School looked closely at the objects that they normally disposed of and made portraits of their garbage as a reminder that these objects might never fully degrade. We began by collecting disposed objects from our surroundings that are delicately beautiful but are quickly disposed of. Then we drew these objects with a ballpoint pen focusing on composition, balance and texture. As a final step in our process we carved linoleum and printed our images using a printing press. My deep hope for this unit was that we will look at disposable objects with a critical eye and come up with creative ways to reuse objects or find ways to avoid one time use. 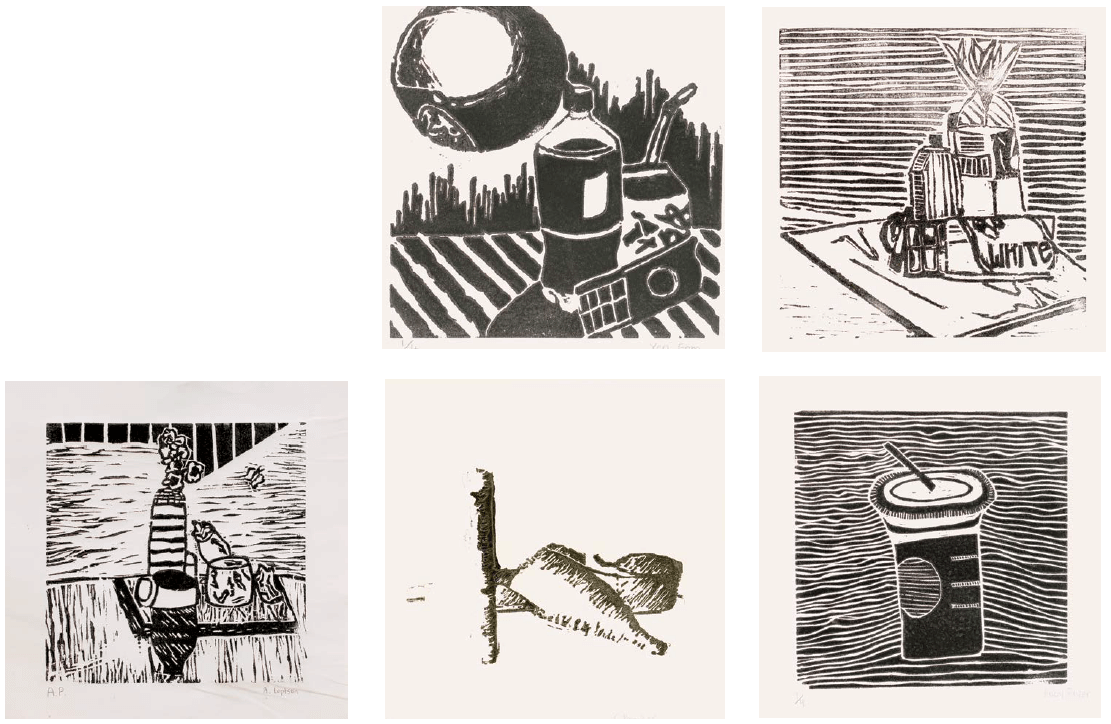 NATHANIEL HOEDEMAKER-PURVIS:
When assigned a project that involves collecting and refurbishing garbage tastefully arranging it in an appealing jumble, then carving a still life out of it, it is obvious that the only class involved is Visual Art. After Ms. Fisher told us of the project, I assumed I would have to find the most sophisticated pop can ever, but the truth was much simpler. All it had to be was, for example, a washed-out plastic spoon, maybe a piece of plastic wrap, or in my case a ripped wrapper from a granola bar that I ate that morning. My group cobbled together an assortment of different objects; a fork, a crushed pop can, a squished water bottle, the granola bar wrapper, and a few other objects. For something made of such disgusting things, it didn’t look bad. When Ms. Fisher had us practise our still live drawings, it wasn’t easy for me. As we repeatedly drew the objects in our sketchbooks, I slowly got better and better. When it came time to carve, I felt I was ready and prepared to do it. I was wrong. I got frustrated as the carver constantly slipped and turned as I tried hard to make my design. After cutting myself accidentally, I realized that I wasn’t focusing. I worked harder and focused more until the carve was finished. I started to print-press my design. This was surprisingly harder than the carving because I had to line up the paper, apply the perfect amount of ink, and roll the print-press with the right pressure. I finished the four final prints after almost thirty tries and ended my project. 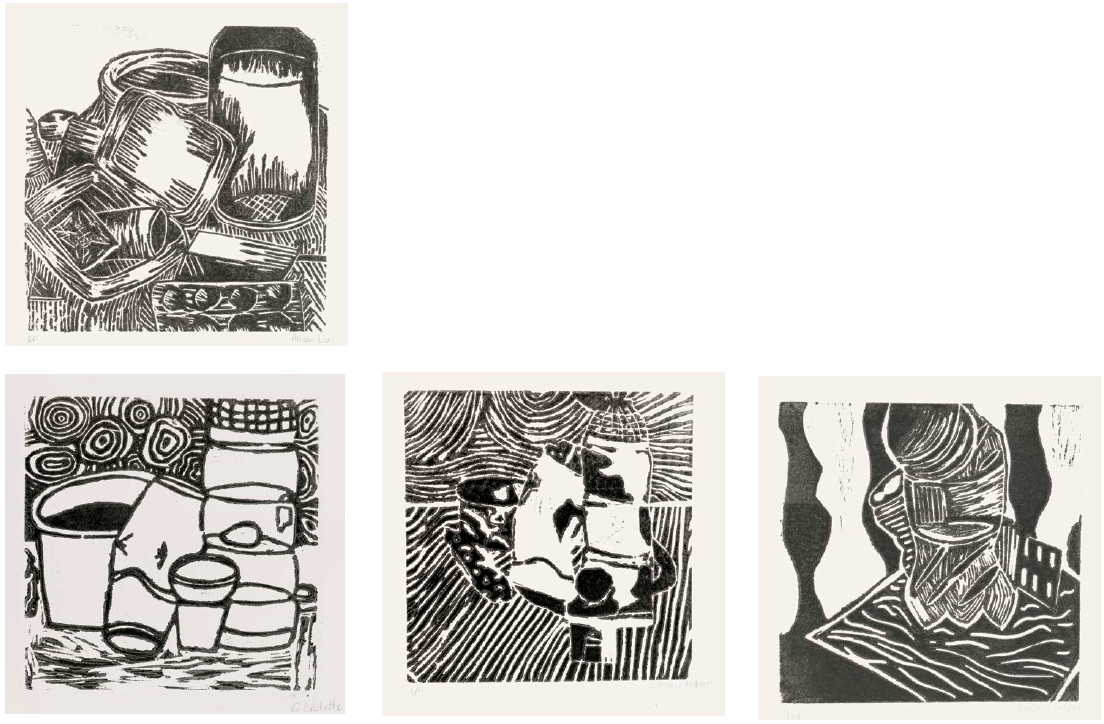 LEONARDO JUNG:
Through the process of collecting, drawing and carving a print based on garbage, I was able to learn how anything can turn into a piece of art. Also, carving the print was a fabulous opportunity to try a unique type of art which is a bit tough but at the end, it visualized all the hard process we went through. This project had a high completeness when it transpired. Hope we could have this opportunity again later on. 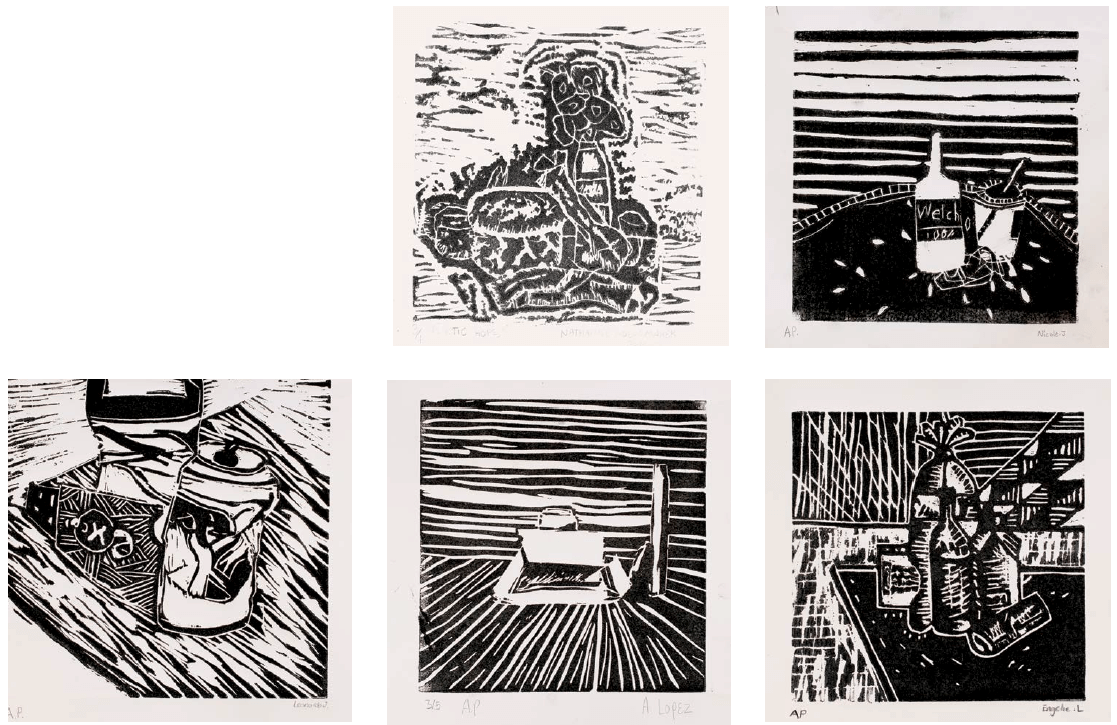 REINA ASAI:
I think it was cool and interesting how we used garbage as inspiration for art because it can help us learn that even if you think something is trash, it can still be used for another use. If the object was crumpled or broken, it made the drawing part even more challenging and that was really fun to draw. I enjoyed the carving part too, because even if it takes a long period of time and patience to complete carving it when you ink your lino and print it for the first time and you see your original drawing printed on paper, everything becomes totally worth it!