Authenticity in a Can 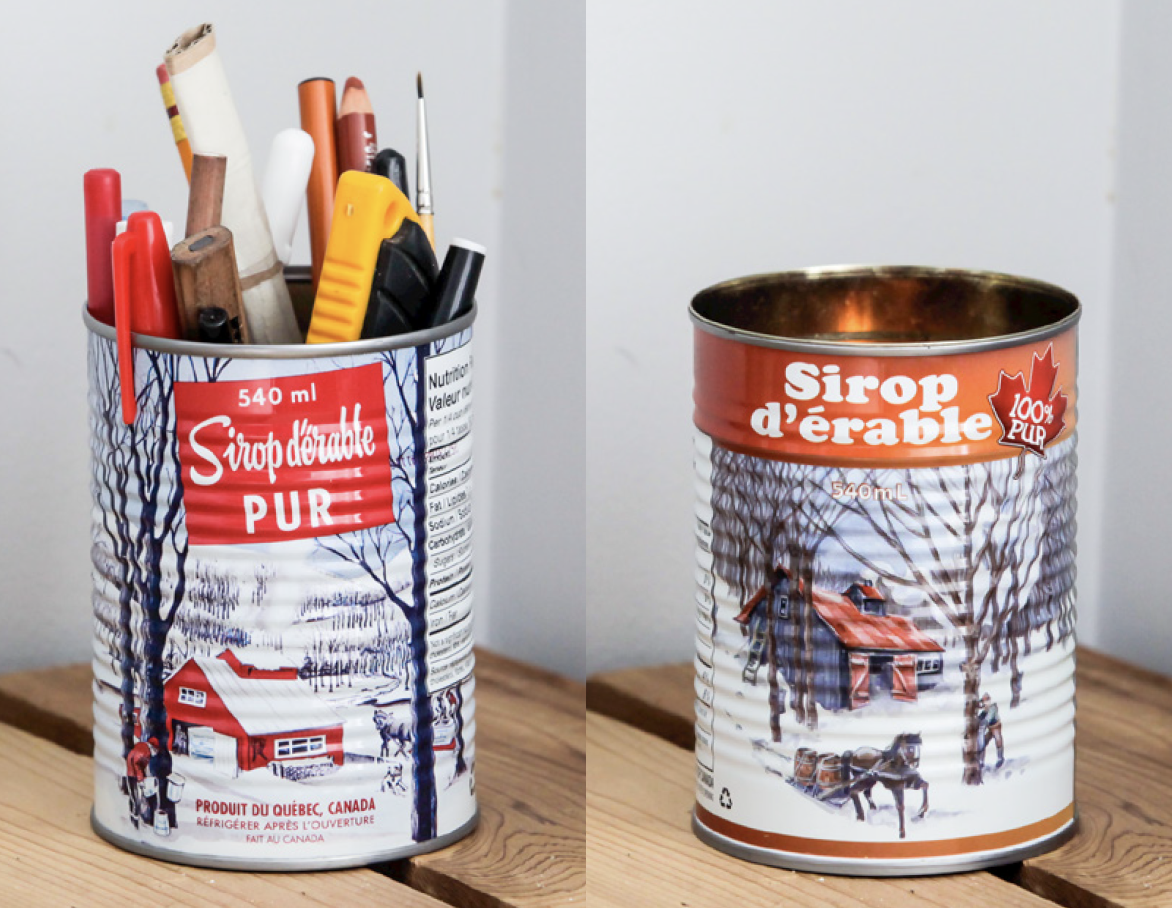 I’m looking at a tin can that rests on the corner of my desk at home. I bought it from the local drug store on sale for $5 on a typically snowy January day in Edmonton. I recognized the same design motif from souvenir and gift shops found just about anywhere in Canada from coast to coast—you know—the ones that sell Canada flag keychains, “Moose X-ing” signs, and butt-flap pyjamas that say “Bear Bum” above an image of a cheeky looking bear.

The outside of the can is labelled in both official languages, but the side facing me reads, “Sirop d’érable” along with “100% PUR” printed inside a maple leaf just next to it. Beneath this text is a snow-covered landscape filled with maple trees. In the foreground is a horse pulling two wooden barrels on a sleigh, a man hanging a steel bucket from a spile, and an old-style sugar shack with an open barn door and a smoking chimney—where one may assume sugar maple sap is being reduced to its delicious ten-times concentrated form. Inside this can, however, is not maple syrup, but rather a maple-scented candle with a wooden wick that crackles while burning. It lights quickly, but the artificial scent is more akin to what a chemical engineer would call “maple scented” and much less like the smell of real maple syrup. Although I typically avoid purchasing kitschy objects, there was an alluring absurdity to this one that held my attention, not to mention I had deliberately set out that day to find a candle.

When I brought the peculiar specimen home I placed it next to another maple syrup can that has sat on my desk for much longer, serving as a catchall penholder. Like the candle, this can-turned-penholder depicts a similar idyllic scene, but with a blue and red colour scheme that is much more familiar. I possess a 23 year old memory of this exact image repeated in a stack of cans that my father had stored beneath our basement staircase for years, and I bought this particular one from my grandfather’s convenience store in Saint-Philippe, Quebec a number of years ago. I’ve kept it mainly for the symbolic values I’ve imposed on it, but must admit that I’ve indulged many-a-time in the peacefulness of the serene landscape printed on its surface.

Both cans were wrapped in romantic depictions of an old fashioned cottage industry as a way to bolster their contents with authenticity; a marketing technique that likely began many years ago when producers realized that they could take a portion of the market share from competitors who labelled their cans with text alone. Many years later, the symbolic value of this imagery has only grown stronger and aligns easily with current trends in shopping for handcrafted, local, and eco-conscious goods. The staying power of maple syrup as a cultural symbol might be because maple syrup is more “Canadian” than the confederation of Canada itself. After all, the syrup consumed today is virtually unchanged from that which Indigenous peoples were making long before the first European settlers arrived, and certainly before winter sports and knitted toques.

Through observation, these landscape-clad cans prove to be more than just vessels for distributing sugary liquid or enticing tourists. They are artefacts that expose many threads that connect to colonial history, patterns in the marketing of Canadian wilderness and ‘winterness’, and the complex orchestration of nationalistic visual identity that exists between artists, industry, and consumers.

Featured Artist – Jonathan S. Green
Land and Childhood – the narratives that come from it