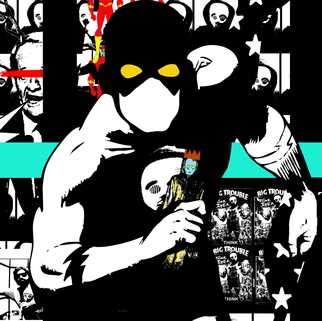 The deviously brilliant leader of ITEM has created a dangerous t.h.i.n.k tank. A dangerous weapon that will help him expand his empire. He is prepared for battle in a mask that uses sunlight to power his cybernetic armor. As the showdown with the Streets of Edmonton begins, he sends in his new tanks for the final attack.

Bringing pop culture commentary into SNAP’s Community Gallery, thinkITEM’s works are commonly found throughout Edmonton in it’s nooks, crannies, and poster walls. Via Instagram, he shares clues of pieces’ whereabouts creating a social media scavenger hunt through the city. We’re excited to have thinkITEM as the first exhibition of 2014 in SNAP’s Community Gallery.