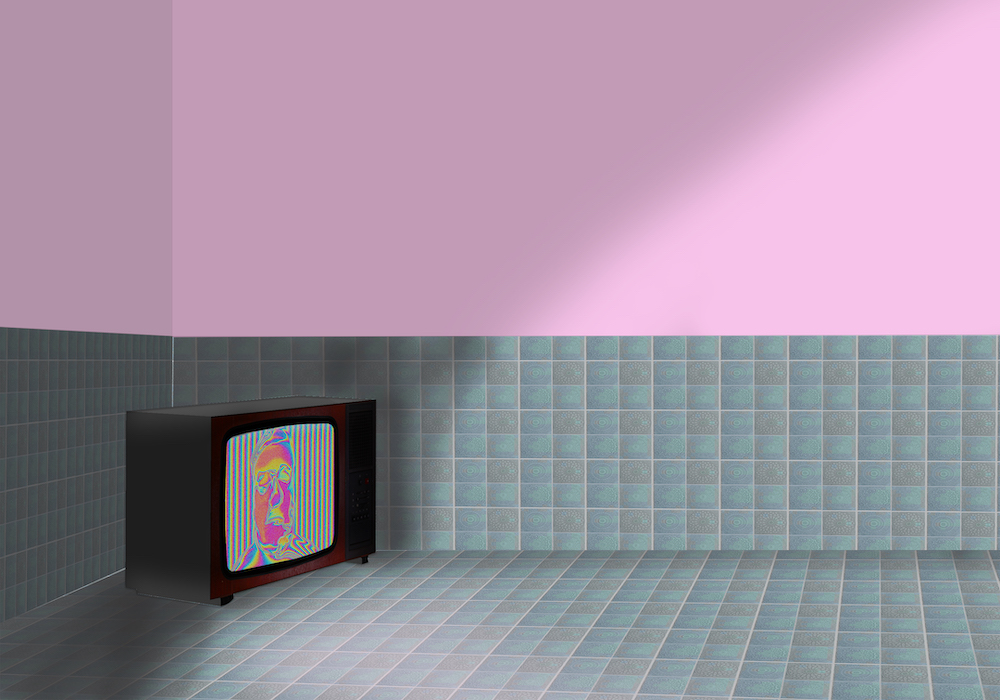 “Hauntology suggests that our perception of the future is only conceivable by acting in retrospect to the past.1 My work presents a hypothetical future in which reality and virtual reality haunt each other in one simultaneous space. This future holds no strong grasp in reality, nor virtuality. Although focusing within this digital realm, the binary relationship of past and present is consequently blurred in my work as well.

My work starts digitally, as I create fabricated, virtual scenes. Moving forward, I combine this digital imagery with traditional practices such as painting, copper plate etching, or collagraph. Process is important in establishing the timeless, historical authority of my work. These techniques bring the digital images into a relatable context with regards to reality. The human touch creates memory about space, blurring reality and time.

My work portrays future real estate, in a world where space is limited. In this future, the only way to store your valuables is by uploading these tangible objects into the digital realm. For example, the houseplant is a recurring motif in my work, used as the stand in for the figure in these digitized spaces, and acting as the value of life transcending into digital storage. Similarly, aged television sets appear in juxtaposition to the houseplant, opening a dialogue between the visceral body of the plant, and the haunting presence of history and technology. This relationship legitimizes the character of the houseplant as the hopeless figure in a fabricated world.

“D.I.S. Tech,” or the Digital Imprint Storage Technology company begins as harmlessly transcending these physical objects into the digital world. In this realm, no decay occurs; it is an immortal, timeless realm. Eventually at the turn of great profit in a dystopian future, riddled with over population and a lack of habitable space, D.I.S. Tech turns to biological tests, and finally human transcendence. Now humans can scan their bodies into an endless web of virtual reality as an escapist utopian dream. While their humanity rots in the decaying state of Earth, humans opt for a virtual world without mortality.

Thematically, my practice explores the strained relationship of mortality and humanity in my work. At a time when technological advances are slowly altering what it means to be alive, humans are choosing not to die. Unrest and division begins to haunt the real world, as well as the virtual. In any interconnected web, things will get caught that do not belong. This virtual pollution relays from hackers and rebels in the form of graffiti and garbage, riddling the perfect “nuclear family” idealism within D.I.S. Tech’s virtual world.

While this constructed world lives in the realm of science fiction, its principles hold true to the state of contemporary life. Humanity is caught in an immovable wave of technological advance, carrying with it a seeming need to “cure” the human condition and push beyond mortality. Is it possible to maintain humanity in an ever-growing fabricated world?”