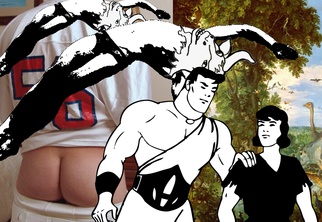 We have been close friends for 10 years meeting on the dance floor at a Lola Magazine party at Lee’s Palace with the question; “I don’t know if you like boys? But you are really cute.” We have appeared sporadically in each other’s work but this is the first time we have worked together.

Sissies and Psychopaths began as a project requisitioned by the Hamilton Print Studio asking for a show responding to what it means to be gay. The project starts with the question “What was gay like when I was 5?” The prints respond with dragons and unicorns, death metal and prince, He-Man and cross-dressing, moustaches and monkeys.

The videos; 1978–1991, uses both Jeffery Dahmer and Freddie Mercury to open the conversation about AIDS/HIV. Mr. Wint and Mr. Kidd on Their Last Cruise adds a new scene to the James Bond film Diamond’s Are Forever, Mr. Wint and Mr. Kidd are the killers hired by Erns Stavro Blofeld to advance his plan and to kill Mr. Bond.

Gay and Light is an interview of my parents in their home about Mr. Humphries, a character in the British comedy Are You Being Served?

What was gay like when I was 5?” forces one to readdress their childhood history. Asking this question assumes a mature and modern understanding of sexuality that is not possible as one is trying to understand the world around them. It also questions the popular notion of either always knowing one was queer, or homosexuality being an innate biological idea. In a playful way the prints use and abuse icons and ascribe them as gay. Even Baphomet becomes a fag.

“Of course I do.” with laughter and a deep kiss was the answer to the question at Lee’s Palace.

The prints are a conversation between the Daryl Vocat and Peter Kingstone on what it meant to be gay when they were 5. The conversation, the images are culled from personal histories, excited memories and media stories. The prints are unframed and wall mounted using magnets.