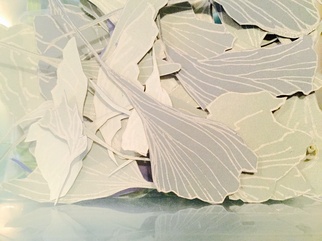 In the community gallery SNAP’s 2015 Emerging Artist in Residence, Dara Humniski presents a new body of work titled Nothing but us. In this exhibition the artist looks at the relationship between humans and nature, and considers the implication of the Anthropogenic state of the world, or the actions humans have permanently made upon the environment. To convey this, the artist uses nature as a starting point then assembles fictional worlds created from abstract mark making and mass-produced natural renderings which represent human’s habitual nature, while paying consideration to the effect and scale the scale of the work.

Dara Humniski is a multi-instrumentalist with a diverse background encompassing visual art, industrial design, public art and carpentry. Using the natural world as a starting point, Dara experiments with scale and media to assemble fictional worlds with open-ended narratives that express things about the human condition. She completed a Bachelor of Design from the University of Alberta and is a founding member of the international design company Loyal Loot Collective. Her work is included in Edmonton’s Public Art Collection and Canadian Centre for Austrian and European Studies. Dara has shown in solo/group shows since 2005.