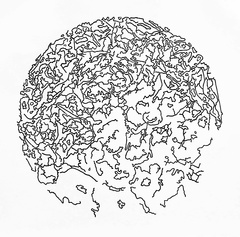 Since 1991 Klavs Weiss has worked with objects shown along side the impressions they make on paper. He exhibits the objects on equal terms with the prints, the object plays the role of an instrument to make an impression but for Weiss the print alone is not the final result. This method illustrates in a simple way the source for his graphic media, namely the process, which is a major part of the value of these works. Thus, these works are unique and not reproducible as traditional prints.

Weiss also incorporates principles of randomness such as in the work ‘Bicycle tube ballets’ (2005) and in this exhibition the work ‘Borderlines’. Here the world’s boundary lines are cut into 164 pieces of veneer, inked and laid in a circular frame as the only holder of the concept – different variations are printed and the prints are displayed along side the veneer pieces. With this piece the composition and re-composition of many pieces of veneer can, through new juxtapositions, generate an infinite number of new countries independent of the natural, cultural and political conditions and barriers.

The 11 cylinders and the imprints of their circumferences are pointing back towards more geometric objects – with this work Weiss attempts to move the focus to the process. Although this work began more than 11 years ago, it has only now been completed in occasion of this exhibition. The cylinders look like tools whose sole purpose it is to be used for printing their own circumference – and so it is. They appear to be an attempt by simple means and simple graphics, to let mathematical and geometric logic into the world of poetry.

Of this body of work Weiss states: ‘I never said that I’m a printmaker, but I like very much when I’m able to use the simple graphic techniques in my attempts to make art’.

The Faces We Know and Love
Super Spy Narratives: Paintings of Drawings of Prints