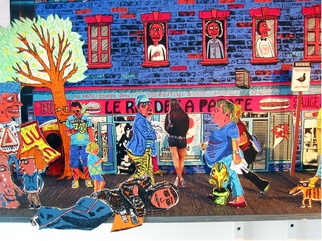 Micropolis 2.0 explores urban life and the relationships between people and large cities. This enchanted universe made out of silkscreen cutouts and digital prints is intended to convey a sense of wonder, awe and contemplation. Looking though the microscope, viewers are drawn in a god-like perspective, entering a strange theatrical dimension where dwarves take lifts on the back of a snail at rush hour. This installation seethes with narration; there is a sense of suspense and palpable drama all over the mini streets of this surreal city where everyone is rushing around like in an insect’s nest. We cannot know every detail of these ambiguous stories happening, but we can feel them nonetheless. Viewers can imagine the moments before or after the one presented.

The piece evokes a childhood world filled with twisted dreams and figurines. The vertiginous shift in scale gives the viewer an impression of distance in time. Assembled to evoke a busy modern commercial street with little pedestrians, creatures and vehicles passing by, it is an anthropological character. Inspired by a mixture of cityscapes and periods of architecture and costume styles this nonlinear temporal space is inspired by Québec, Montréal and Toronto.

Allison Moore is a multidisciplinary artist. Originally from the west coast Vancouver Island, she is now located in Montréal, and has produced projects in Ecuador, Brazil, the United Kingdom, and Europe. Allison obtained a BFAdegree in Interdisciplinary Arts at the University of Concordia in 2005. She is an active member of Oboro New Media Labs and has developed projects in live video performance, animation and interactive computing as an invited artist at Studio XX and the Society of Arts and Technology in Montréal. Allison’s projects at Studio XX focus on using open source media tools such as Pure Data, Arduino, and Blender 3d Game engine to create new media installations. In the summer months, Allison teaches animation and visual effects at Gulf Island Film School (G.I.F.T.S.).

Arthur Desmarteaux obtained a BFA in media and visual arts from University of Québec in Montréal in 2003. He is an active member of Graff Studios in Montréal, ARPRIM [Association for the promotion of Printed Arts in Québec] and the Puppet Association of Québec. He has produced and exhibited projects in Quebec, Canada and Internationally. His principal inspiration derives from the Pop Art Movement and the figuration narrative of the sixties; art brut, or Outsider Art, and the naivety found in children’s drawings. The subjects are taken from everyday life in the city, the mass-media, the graphic style of retro video games, theatre plays, the history of cinema and at times referring to art history and popular culture. Arthur uses automatic drawings, dreams and memories, forming a sense of nostalgia to influence his bizarre creations.

The Sunny Side of Edmonton
Walking on Walls