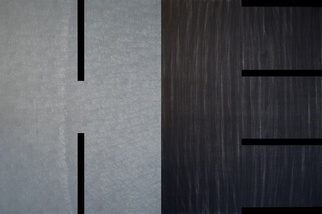 SNAP Gallery invites members and guests to Fractions from Belgian artist, Ingrid Ledent. In this upcoming conceptual exhibition, Ingrid Ledent presents work where she combines mediums to create an interpretation of representation and serendipity of time. Starting with stone lithographic prints, the artist allows the process to influence the content by printing repeating layers to develop new visual forms that both depict the change of time and the time they took to create. These prints act as an element in her finished piece, combining digital elements of print, video and sound, to further augment the boundaries of her craft and the subject of time.

Ingrid Ledent was born in 1955 in Brasschaat (Belgium). She studied graphic art at the Royal Academy of Fine Arts in Antwerp and specialized in lithography in Rudolf Broulim’s studio at the Academy of Applied Arts in Prague, Czech Republic. In 1981 she obtained her Master Degree at the National Higher Institute of Fine Arts in Antwerp. Currently Ingrid Ledent is a professor of lithography at the Royal Academy of Fine Arts in Antwerp where she has been teaching since 1984. She has given workshops in lithography at many national and international institutions and has been shown in numerous individual and group exhibitions in Armenia, Belgium, Brazil, Bulgaria, Canada, China, Croatia, Czech Republic, Denmark, Estonia, Finland, France, Germany, Great Britain, Hungary, Italy, Japan, Morocco, The Netherlands, Norway, Poland, Russia, Slovenia, South Africa, South Korea, Spain, Sweden, United States, and Ukraine.

Nothing but us
The Lebret Residential Petroglyphs