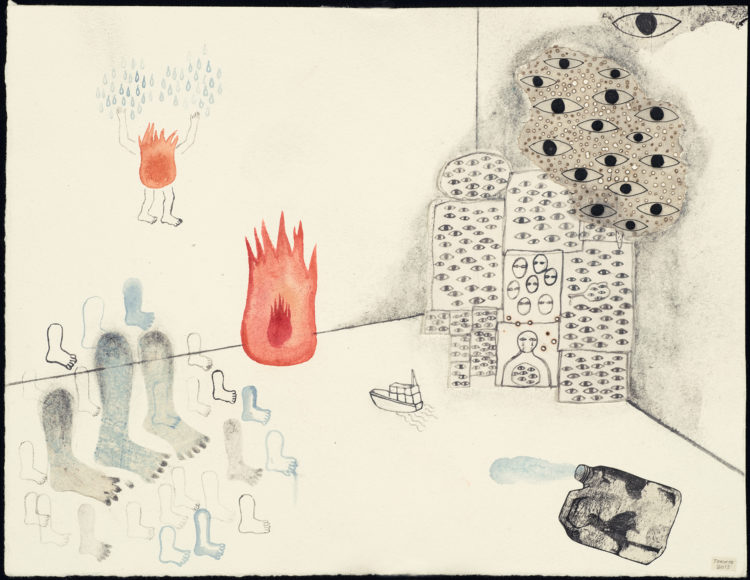 Artist Tomoyo Ihaya says about her work: “After many years of traveling and living abroad, particularly in India (sixteen visits since 2005), I have grown increasingly sensitive to people who have been forced to migrate. I have heard many stories of the loss of lives in struggle against suppression, lost homelands, escapes, and life in exile. There are many young and old friends with whom I have shared time together, who are refugees. Each of them possesses a story of hardship within his/her heart. They have not seen their families for many years. Some elder friends have passed away in the foreign land they escaped to, far from their native land. All these stories I have heard have made me think about what it is to be born and live. As a person who was born in a stable country (Japan) and who now lives in a stable country (Canada), my level of resonance/synchronization with these people and their journeys may not be able to reach the true depth of their despair. However, I do feel pain and I feel compelled to draw when I see the images and hear the stories of thousands of people escaping en masse over mountains, across great plains and oceans by any means possible. These works are the result of my direct and indirect experiences with people whom I have come to know.

Eyes Water Fire comprises videos, installation, and mixed media drawings that record my longstanding engagement with the lives and struggles of close friends who are refugees, with whom I have spent much time in India. The installation expands my art-making beyond the fixed dimensions of the prints and drawings with which I have long been identified. Eyes Water Fire utilizes layering and repetition to suggest narrative complexity and convey a sense of the cycle of life and death while allowing the possibility of folding new ideas and experiences into each site-specific interaction.”

Tomoyo Ihaya was born and raised in Tsu City, Mie, Japan, and has been a resident of Canada since 2000. After studying studio arts at universities across Canada, she obtained her MFA from the University of Alberta (2002). Her curiosity about other cultures and strong belief that art and one’s life should be intertwined has led her to travel and produce artwork through international artist-in-residency programs in India, Mexico, Thailand, the United States and Canada. She has exhibited locally, nationally and internationally since 1998 and is a recipient of numerous project grants and awards for artists. Since 2005, Ihaya has spent an extensive amount of time in India on independent art research projects. When she is not in India or elsewhere, she lives in Vancouver, British Columbia, Canada, where she teaches and makes art.