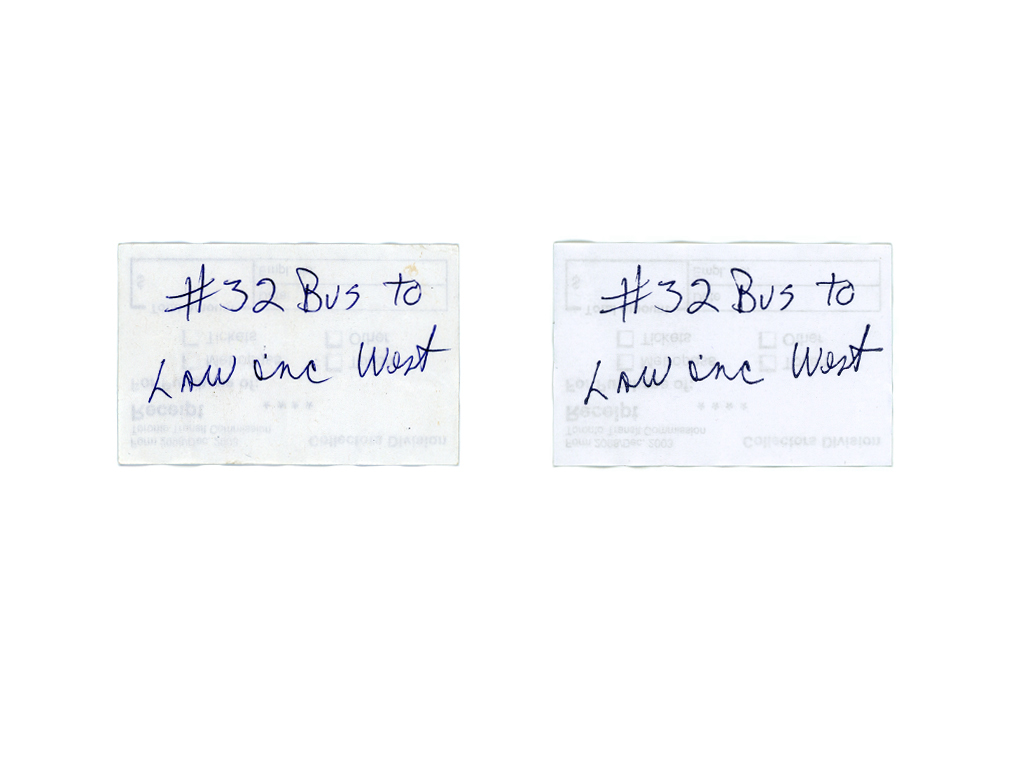 People are evidenced on paper throughout their homes and across their personal and professional lives. We keep paper intentionally and as the result of laziness – not wanting to cull piles and undertake the work of sorting the necessary from the superfluous. Some papers are produced deliberately, while others materialize haphazardly. Regardless, the gestures used to produce papers (even those as unassuming as scribbles or the way a piece of paper has been torn), point the object’s observer outside the object, to a moment of production that is evidenced but no longer accessible.

Doppelgängers is an ongoing body of work, which sets found paper objects and meticulous copies side-by-side. Each small detail of the found papers is copied using like materials and actions to imitate those observed. At first glance these Doppelgängers might appear identical, while upon closer inspection they exhibit subtle inevitable differences. The relationship between these found and fabricated objects becomes a means of exploring the limits of reproduction, through the labour of observation and duplication. The act of copying within Doppelgängers is not undertaken with the goal of achieving perfection, but rather to realize a sameness that acknowledges difference. Pairs provide an occasion to perform direct comparison – to move back and forth between one object and the other. Here, the copy is not produced to deceive or to disseminate, but to accompany the original. Regardless of the most perfect resemblance, a copy is always distinct from its original in time, space, and matter.

Evidence of human gestures embodied in material culture allows one to learn about or remember the past moments an object refers to. Cultural historian Hillel Schwartz differentiates between two modes of copying, those that duplicate stroke-by-stroke, and those that duplicate an entity in its entirety.1 Copying stroke-by-stroke allows one to approximate the actions that produced an original, by engaging in a sort of re-staging.  Alternately, copying an entity in its entirety generates a complete copy all at once using mechanisms such as photography or xerography. Within Doppelgängers a stroke-by-stroke methodology is used mimic not only content, but also the processes that occurred during the creation of the found objects. Copying in this manner becomes a process of production with performative implications – involving mimicry of events and actions. Each copy within this body of work is an attempt to re-create past moments through the physical processes of cutting, tearing, printing, and drawing – actions undertaken while acknowledging inevitable failure and impossibility.

Contemporary understandings of similarity and difference are often tied to mass production, and the history of photographic, xerographic, and digital imaging technology. Art historian Walter Cupperi has suggested that “our interpretation of the similarity between [two objects] strongly depends on our conceptualization of their authorship and our reconstruction of their production process …”2 Today, copying is easy. Copies are encountered constantly as mass-produced multiples and digital content that has not been imbued with the baggage of the singular physical object. Copying objects slowly and laboriously brings to the fore the minutiae of their materiality and the affects located in the gestures of their construction.

Kristie MacDonald is a visual artist who lives and works in Toronto, Canada. Her practice engages notions of the archive and the collection, as well as the evolving contextual histories of images and artifacts. Her work has recently been exhibited at the Art Gallery of Mississauga (ON), the MacLaren Art Centre (Barrie ON), BABEL Visningsrom for Kunst (Trondheim NO), Reed Collage (Portland OR), Open Studio Contemporary Printmaking Centre (Toronto ON), and Gallery 44 (Toronto ON). MacDonald is currently a practice based PhD Candidate in the Department of Visual Art at York University and an Assistant Professor of Print Media & Digital Printmaking at the University of Guelph.

Opening reception: Friday, July 5th, 7-9pm
with an Artist’s Talk at 6 pm in the Printshop